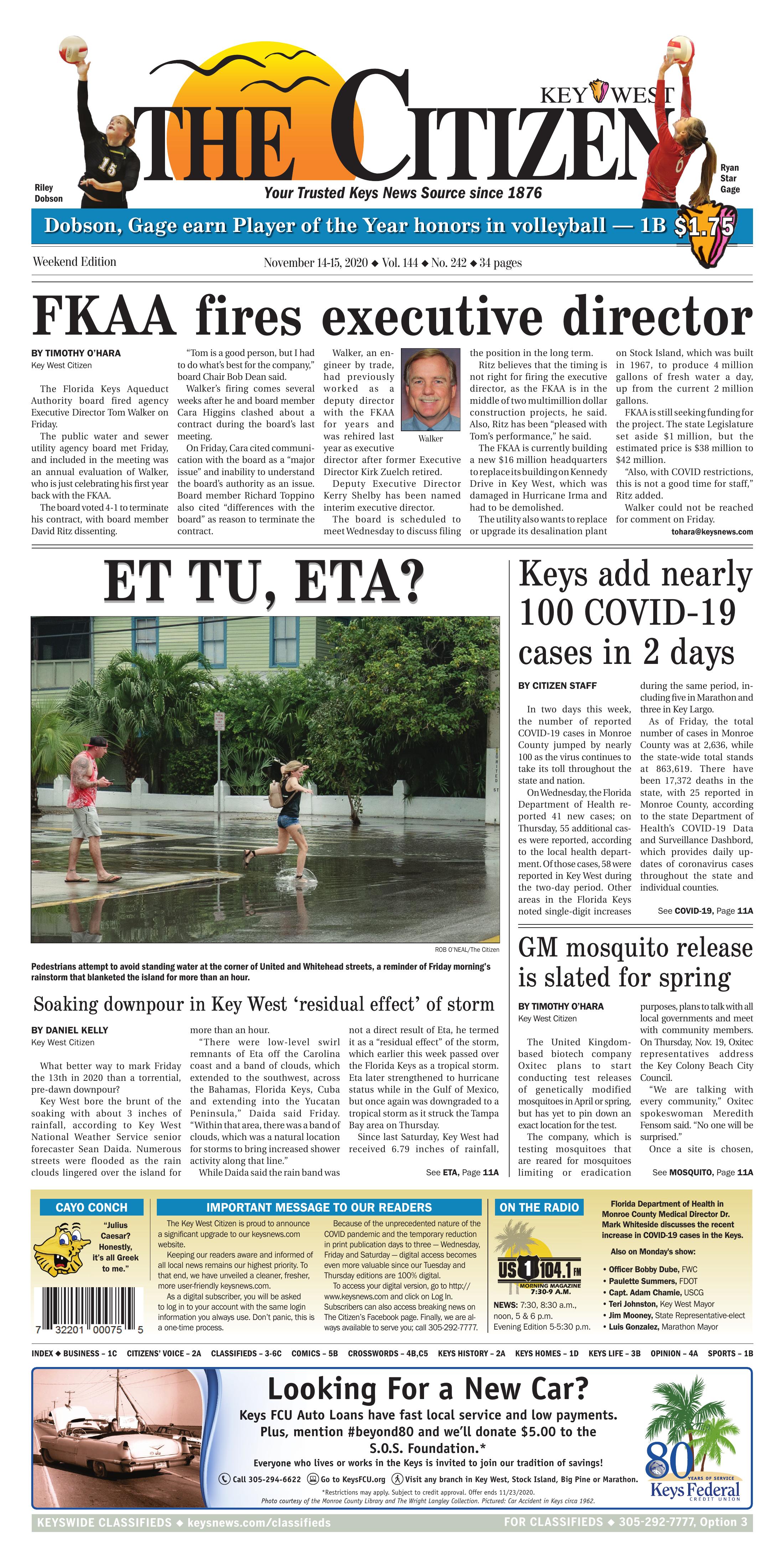 The public water and sewer utility agency board met Friday, and included in the meeting was an annual evaluation of Walker, who is just celebrating his first year back with the FKAA.

The board voted 4-1 to terminate his contract, with board member David Ritz dissenting.

“Tom is a good person, but I had to do what’s best for the company,” board Chair Bob Dean said.

Walker’s firing comes several weeks after he and board member Cara Higgins clashed about a contract during the board’s last meeting.

On Friday, Cara cited communication with the board as a “major issue” and inability to understand the board’s authority as an issue. Board member Richard Toppino also cited “differences with the board” as reason to terminate the contract.

Walker, an engineer by trade, had previously worked as a deputy director with the FKAA for years and was rehired last year as executive director after former Executive Director Kirk Zuelch retired.

The board is scheduled to meet Wednesday to discuss filing the position in the long term.

Ritz believes that the timing is not right for firing the executive director, as the FKAA is in the middle of two multimillion dollar construction projects, he said. Also, Ritz has been “pleased with Tom’s performance,” he said.

The FKAA is currently building a new $16 million headquarters to replace its building on Kennedy Drive in Key West, which was damaged in Hurricane Irma and had to be demolished.

The utility also wants to replace or upgrade its desalination plant on Stock Island, which was built in 1967, to produce 4 million gallons of fresh water a day, up from the current 2 million gallons.

FKAA is still seeking funding for the project. The state Legislature set aside $1 million, but the estimated price is $38 million to $42 million.

“Also, with COVID restrictions, this is not a good time for staff,” Ritz added.

Walker could not be reached for comment on Friday.

Pedestrians attempt to avoid standing water at the corner of United and Whitehead streets, a reminder of Friday morning’s rainstorm that blanketed the island for more than an hour.

A vehicle tries to make its way along one of the many Old Town Key West streets that flooded following heavy rains before dawn on Friday.

A portion of Whitehead Street remains closed Friday morning due to heavy rains across the island.

What better way to mark Friday the 13th in 2020 than a torrential, pre-dawn downpour?

Key West bore the brunt of the soaking with about 3 inches of rainfall, according to Key West National Weather Service senior forecaster Sean Daida. Numerous streets were flooded as the rain clouds lingered over the island for more than an hour.

“There were low-level swirl remnants of Eta off the Carolina coast and a band of clouds, which extended to the southwest, across the Bahamas, Florida Keys, Cuba and extending into the Yucatan Peninsula,” Daida said Friday. “Within that area, there was a band of clouds, which was a natural location for storms to bring increased shower activity along that line.”

While Daida said the rain band was not a direct result of Eta, he termed it as a “residual effect” of the storm, which earlier this week passed over the Florida Keys as a tropical storm. Eta later strengthened to hurricane status while in the Gulf of Mexico, but once again was downgraded to a tropical storm as it struck the Tampa Bay area on Thursday.

Daida said Friday’s rainfall was expected, but it exacerbated flooding problems following numerous rounds of heavy rainfall since Eta passed over the Keys.

The National Weather Service is still in the process of collecting official rainfall totals during the past 24 hours, Daida said, noting that unofficially, Big Coppitt Key reported 2 inches of rainfall.

“I live on Big Coppitt. I can say there was quite of bit of water on the roads,” Daida said.

While it is the rainy season in the Keys, another downpour in September caused wide-spread flooding in Key West. According to the National Weather Service, nearly 4 inches of rain fell in Key West within an hour on Sept. 12; by early morning on Sept. 13, Key West International Airport was reporting 9.37 inches of rainfall.

Looking ahead, the Keys will begin to dry out as the environment is in transition, Daida said. An expected cold front will push its way through the Keys early next week with winds that will send dewpoints down into the 60s and temperatures down near 80.

“It’s going to start to feel like sweater weather for many Key West citizens,” Daida said.

The chances for rain will drop down into the 10%-20% range for the remainder of the seven-day forecast, Daida explained, although he stopped short of saying that the dry season is officially here.

“But this should usher in the dry season,” he said.

In two days this week, the number of reported COVID-19 cases in Monroe County jumped by nearly 100 as the virus continues to take its toll throughout the state and nation.

On Wednesday, the Florida Department of Health reported 41 new cases; on Thursday, 55 additional cases were reported, according to the local health department. Of those cases, 58 were reported in Key West during the two-day period. Other areas in the Florida Keys noted single-digit increases during the same period, including five in Marathon and three in Key Largo.

As of Friday, the total number of cases in Monroe County was at 2,636, while the state-wide total stands at 863,619. There have been 17,372 deaths in the state, with 25 reported in Monroe County, according to the state Department of Health’s COVID-19 Data and Surveillance Dashbord, which provides daily updates of coronavirus cases throughout the state and individual counties.

There are currently five people hospitalized in the Keys due to the coronavirus.

“We still have COVID in the Keys and the concentration of the numbers we have are in the Key West area, which is not surprising given the major population center is there, it is also the major entertainment district,” local health department administrator Bob Eadie said recently.

The United Kingdom-based biotech company Oxitec plans to start conducting test releases of genetically modified mosquitoes in April or spring, but has yet to pin down an exact location for the test.

The company, which is testing mosquitoes that are reared for mosquitoes limiting or eradication purposes, plans to talk with all local governments and meet with community members. On Thursday, Nov. 19, Oxitec representatives address the Key Colony Beach City Council.

“We are talking with every community,” Oxitec spokeswoman Meredith Fensom said. “No one will be surprised.”

Once a site is chosen, Oxitec plans to release “millions” of genetically modified mosquitoes from about 130 boxes that will be strategically placed in a test area for roughly 28 weeks, Fensom said. The boxes will most likely placed on people’s properties and homes. The company will also be enlisting people to host traps to catch and county the mosquitoes, Fensom said.

The company recently launched a campaign to engage community members and is asking them to vote for their color and design for the plastic box that will release the mosquitoes. The campaign ends Monday, Nov. 16, and people can vote by visiting http://www.keysmosquitoproject.com/vote.

While an exact location has not yet been determined, Fensom said “we will not go where we are not wanted.” The compnay is already doing surveys and the boxes will be placed “where there is the most demand.”

“I think there is a lot of support for this,” Fensom said.

The test release has received pushback from the Florida Keys Environmental Coalition, which contends there is not enough to independent science on Oxitec’s technology. The group and some local doctors also want more research on Oxitec’s technology use of Tetracycline in the mosquitoes and how it could impact antibiotic resistance in people in the Keys.

On Thursday, Coalition members met with representatives of the EPA, which approved the test release in the Keys, said Coalition Executive Director Barry Wray, who added that the EPA “invited” his group to the meeting.

In August, the Florida Keys Mosquito Control District board voted 4-1 to proceed with Oxitec’s proposal, with Commissioner Brandon Pinder casting the lone vote against the test.

The approval comes as the Keys are seeing its second outbreak of the Aedes aegypti mosquito-transferred disease dengue fever in the past decade. There have been roughly 50 cases reported this year, with the bulk of those being reported in Key Largo in the past two months.

Oxitec and the district contend the two dengue outbreaks underscore the need to conduct the test release.

Two Upper Keys doctors spoke in favor of the test release. Dr. John Weare called mosquitoes some of the deadliest animals on the planet because they are a main vector of diseases. Likewise, Dr. Susana May argued in favor of the test, stating that she has seen firsthand the misery of the dengue fever in small children while working in Venezuela.

The Oxitec mosquitoes are reared to have a self-destruction mechanism in their DNA, which stops the female insects from reaching adulthood, according to Oxitec.

Tetracycline keeps the mechanism from starting in females, which are given small doses of the antibiotic when they are larvae to keep them alive to produce eggs.

The male mosquitoes are not affected by the self-destruction mechanism in their DNA, and so males that are released into the wild never encounter tetracycline, according to Oxitec.

Last year, the company redesigned its technology and developed an updated version of the mosquito. The second generation allows for greater efficiencies in rearing and better suppression, according to Oxitec.