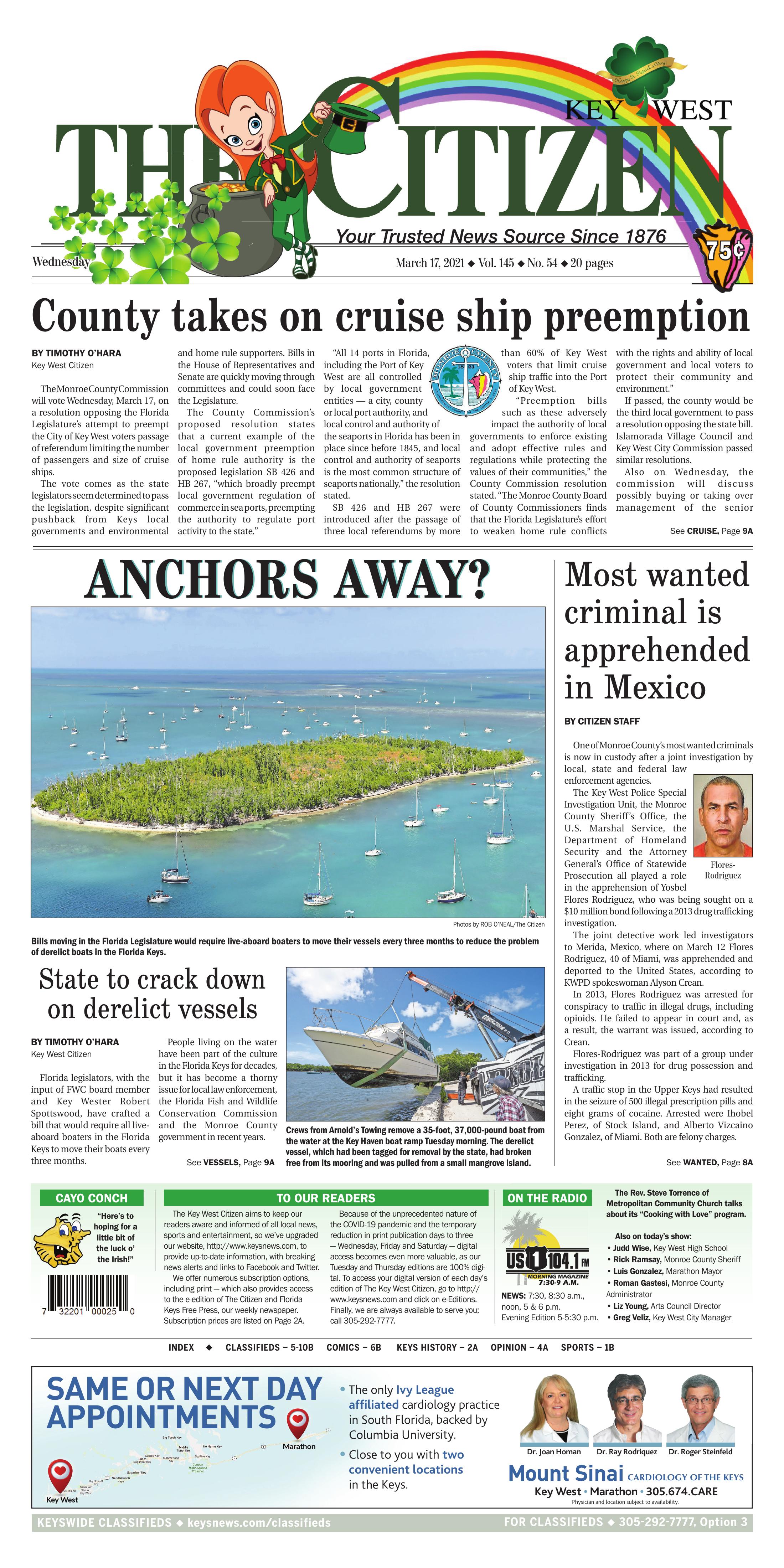 The Monroe County Commission will vote Wednesday, March 17, on a resolution opposing the Florida Legislature’s attempt to preempt the City of Key West voters passage of referendum limiting the number of passengers and size of cruise ships.

The vote comes as the state legislators seem determined to pass the legislation, despite significant pushback from Keys local governments and environmental and home rule supporters. Bills in the House of Representatives and Senate are quickly moving through committees and could soon face the Legislature.

The County Commission’s proposed resolution states that a current example of the local government preemption of home rule authority is the proposed legislation SB 426 and HB 267, “which broadly preempt local government regulation of commerce in sea ports, preempting the authority to regulate port activity to the state.”

SB 426 and HB 267 were introduced after the passage of three local referendums by more than 60% of Key West voters that limit cruise ship traffic into the Port of Key West.

“Preemption bills such as these adversely impact the authority of local governments to enforce existing and adopt effective rules and regulations while protecting the values of their communities,” the County Commission resolution stated. “The Monroe County Board of County Commissioners finds that the Florida Legislature’s effort to weaken home rule conflicts with the rights and ability of local government and local voters to protect their community and environment.”

If passed, the county would be the third local government to pass a resolution opposing the state bill. Islamorada Village Council and Key West City Commission passed similar resolutions.

Also on Wednesday, the commission will discuss possibly buying or taking over management of the senior living facility at Poinciana Gardens.

The facility is currently owned and operated by the Key West Housing Authority. However, the Housing Authority has struggled with keeping a management company in place to run and the facility has been operating at far less than capacity and is struggling to generate revenue.

The county gave the Housing Authority $400,000 this year to help defer costs.

The commission meeting starts at 9 a.m. and will be a hybrid format with commissioners meeting live at the Murray E. Nelson Government Center in Key Largo. The public can participate via Communication Media Technology (“CMT”) using a Zoom webinar platform. Information on participating in the meeting can be found at http://monroecountyfl.iqm2.com/citizens/default.aspx.

Government
featured
ANCHORS AWAY?
State to crack down on derelict vessels
Photos by ROB O’NEAL/The Citizen

Bills moving in the Florida Legislature would require live-aboard boaters to move their vessels every three months to reduce the problem of derelict boats in the Florida Keys.

Crews from Arnold’s Towing remove a 35-foot, 37,000-pound boat from the water at the Key Haven boat ramp last week. The derelict vessel, which had been tagged for removal by the state, had broken free from its mooring and was pulled from a small mangrove island.

Vessels, both live-aboard and abandoned, are seen off Boyd’s Campground on Stock Island Tuesday morning.

Florida legislators, with the input of FWC board member and Key Wester Robert Spottswood, have crafted a bill that would require all live-aboard boaters in the Florida Keys to move their boats every three months.

People living on the water have been part of the culture in the Florida Keys for decades, but it has become a thorny issue for local law enforcement, the Florida Fish and Wildlife Conservation Commission and the Monroe County government in recent years.

Spottswood and the legislators proposed HB 639, and its Senate companion bill SB 1086, after the FWC and the county government tried unsuccessfully for years to deter boats from becoming derelict and sinking, and the entities have spent hundreds of thousands of dollar removing sunk or partially sunk vessels that could have gone to boat ramps, channel markers and other water-dependent activities.

However, live-aboard boats have become a source of affordable housing in a chain of islands where it is difficult to find a one-bedroom apartment for less than $2,000 a month.

Spottswood became involved in the issue after the FWC and the county removed thousands of sunken vessels after Hurricane Irma, he told The Key West Citizen on Tuesday.

“If you look out in the water in the Keys, you will see vessels sitting around falling apart waiting to become derelict,” Spottswood said. “This is a real attempt to address derelict vessels. This is also an attempt to protect our environment. These boats are damaging grassy seabeds.”

The intent of the bill is “not to push anyone out, but to pick out areas where they can go and have pump-out services, dinghy docks and showers,” Spottswood said.

“We can actually improve the quality of life and provide better services,” Spottswood said.

The 78-page HB 639 was filed by State Rep. Tyler Sirois, R-Merrit Island, and SB 1086 was filed by Sen. Travis Hutson, R- Palm Coast. The bills address several issues relating to boating and could limit or restrict where people anchor or moor in several areas of the state.

“Monroe County is designated as an anchoring limitation area within which a vessel may only be anchored in the same location for a maximum of 90 days,” the bills state. “The (FWC) commission shall adopt rules to implement this subsection.”

The requirement to move a vessel every 90 days would not apply to vessels moored in management mooring fields, such as the Key West city mooring field.

Last month, the Monroe County Commission passed a resolution in support of HB 639 and SB 1086.

“Monroe County worked with FWC to amend Florida Statutes to regulate illegal and unpermitted moorings to address public safety, environmental degradation, and their direct contribution to the proliferation of abandoned and derelict vessels,” the County Commission resolution stated. “Monroe County recognizes this proposed legislation as an important continuation of both state and local efforts to improve vessel safety, reduce vessel dereliction and illegal marine waste discharges, and protect our citizens and our environment.”

The bill is being met with resistance from people who call or have called their vessels home.

Key West resident Ben Lieb wrote state legislators a letter outlining his objections to the proposed bill, stating these bills effectively and greatly “increase the difficulty of ‘living aboard’ in Monroe County.”

“Live-aboard boaters form a large proportion of the local workforce and faced with current high rental prices and the greater than ever lack of short-term rentals further reducing housing availability, with many Keys residents naturally gravitate towards the option of life ‘on the hook,’ “ he wrote.

Lieb argued most boats that survive the tropical storms and hurricanes had multiple anchors. By having the mariners pull up the anchors and moving the vessels every 90 day, the boats would be less secure in storms and it would create more problems to the sea bottom and the environment, he wrote.

“Boats employing these systems I’ve described were almost exclusively the few to survive Hurricane Irma,” Lieb wrote. “More actually sunk safely attached to their anchoring system instead of breaking free and causing collateral damages. The city moorings neighboring Key West Harbor were hit equally as hard and certainly did not fare any better than those boats in the harbor proper which were anchored according to our experiential community best practices.”

There are no mooring fields in Monroe County other than those which are perpetually full, and no efforts are underway to increase the number of moorings, according to Lieb.

“It is clear to me and my community that in order to preserve a functioning economy as well as the security of a traditional and essential way of life in Monroe County, forcing us to hop around the anchorages every three months during hurricane season is counter productive to everyone’s goals,” Lieb wrote. “Nor will it serve to reduce the number of derelict boats, the supposed goal of the legislation.”

The Key West Citizen , which has been the Florida Keys’ trusted news source since 1876, aims to keep our readers aware and informed of all local news, sports and entertainment, so we’ve upgraded our website, http://www.keysnews.com, to provide up-to-date information, with breaking news alerts and links to Facebook and Twitter.

We offer numerous subscription options, including print — which also provides access to the e-edition of The Citizen and Florida Keys Free Press, our weekly newspaper. Subscription prices are listed on Page 2A.

Because of the unprecedented nature of the COVID-19 pandemic and the temporary reduction in print publication days to three — Wednesday, Friday and Saturday — digital access becomes even more valuable, as our Tuesday and Thursday editions are 100% digital. To access your digital version of each day’s edition of The Key West Citizen, go to http://www.keysnews.com and click on e-Editions. Subscribers can also access breaking news on The Citizen’s Facebook page. Finally, we are always available to serve you; call 305-292-7777.

Crime
featured
One of Monroe County's most wanted arrested in Mexico

One of Monroe County’s most wanted criminals is now in custody after a joint investigation by local, state and federal law enforcement agencies.

The Key West Police Special Investigation Unit, the Monroe County Sheriff’s Office, the U.S. Marshal Service, the Department of Homeland Security and the Attorney General’s Office of Statewide Prosecution all played a role in the apprehension of Yosbel Flores Rodriguez, who was being sought on a $10 million bond following a 2013 drug trafficking investigation.

The joint detective work led investigators to Merida, Mexico, where on March 12 Flores Rodriguez, 40 of Miami, was apprehended and deported to the United States, according to KWPD spokeswoman Alyson Crean.

In 2013, Flores Rodriguez was arrested for conspiracy to traffic in illegal drugs, including opioids. He failed to appear in court and, as a result, the warrant was issued, according to Crean.

Flores-Rodriguez was part of a group under investigation in 2013 for drug possession and trafficking.

A traffic stop in the Upper Keys had resulted in the seizure of 500 illegal prescription pills and eight grams of cocaine. Arrested were Ihobel Perez, of Stock Island, and Alberto Vizcaino Gonzalez, of Miami. Both are felony charges.

An earlier investigation in the Lower Keys that spanned local and federal law enforcement groups resulted in multiple arrests that netted two kilograms of cocaine, hundreds of pills, nearly $200,000 in cash and guns. Arrested in that investigation was Jasmani Vizcaino Gonzalez.

In 2015, Flores-Rodrigues was named in a case that sought to reverse an earlier dismissal order involving himself and the other defendants. That case was remanded for further proceedings.