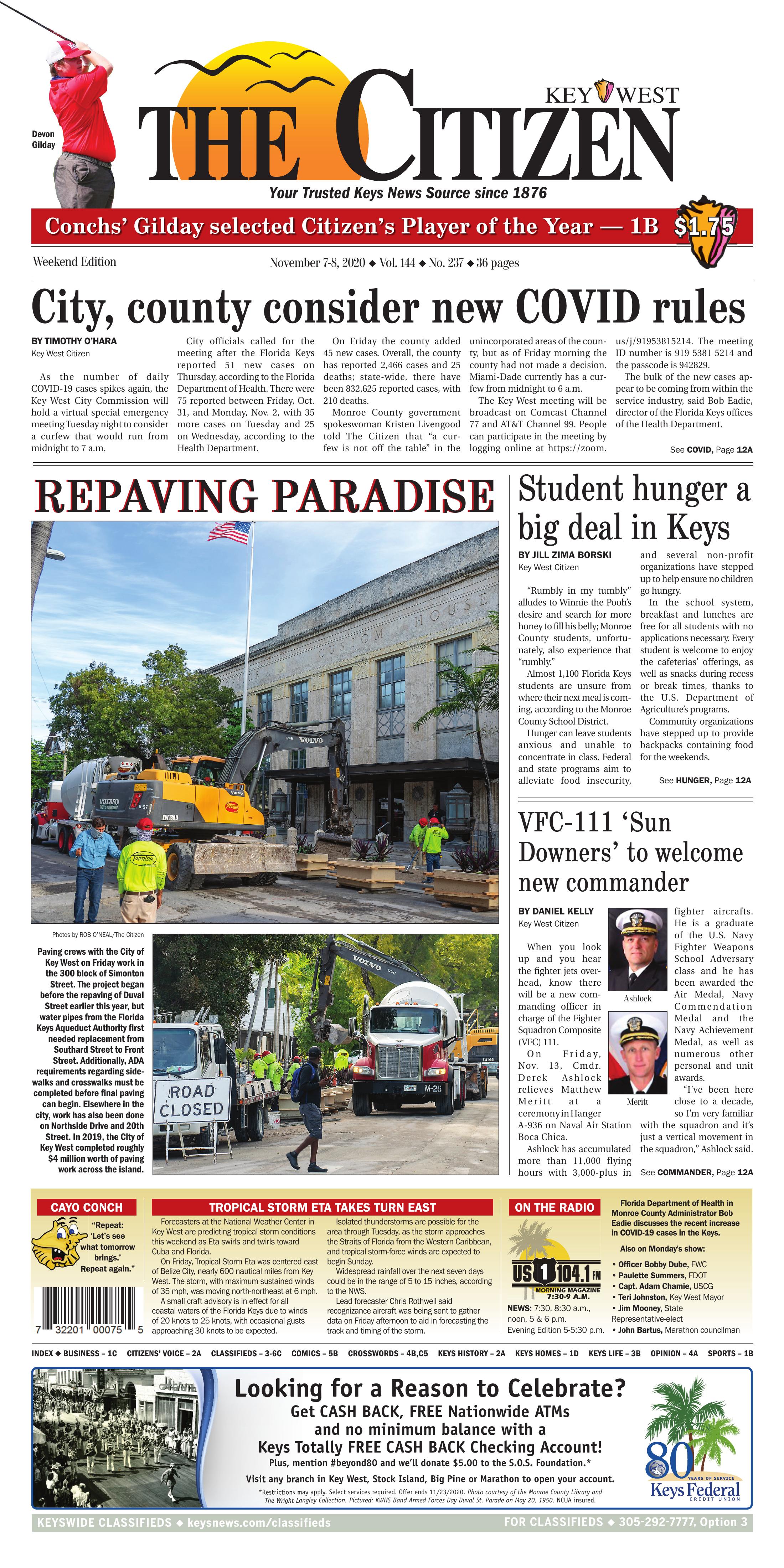 Editor's note: This story has been updated to show Tuesday's Key West City Commission meeting will be held at 10 a.m., and to correct the number of state-wide COVID-19 fatalities.

As the number of daily COVID-19 cases spikes again, the Key West City Commission will hold a hybrid in-person/virtual special emergency meeting Tuesday at 10 a.m. to consider a curfew that would run from midnight to 7 a.m.

Monroe County government spokeswoman Kristen Livengood told The Citizen that “a curfew is not off the table” in the unincorporated areas of the county, but as of Friday morning the county had not made a decision. Miami-Dade currently has a curfew from midnight to 6 a.m.

The bulk of the new cases appear to be coming from within the service industry, said Bob Eadie, director of the Florida Keys offices of the Health Department.

The positivity rate is about 10%, Eadie said. Below 5% is “good” and under three [percent] would be “absolutely wonderful,” Eadie said.

The spike comes two weeks after Key West received an influx of visitors for what would have been Fantasy Fest week. The city had “less-than-stellar compliance” from its visitors that week, Eadie said.

“There were a lot of University of Miami students who couldn’t party in Miami,” Eadie said. “They weren’t socially distancing and they were not wearing masks while standing in line. … We are seeing that second wave. We are not out of the woods.”

Key West Mayor Teri Johnston is concerned as Key West enters back into its tourist season and its return of snowbirds, she said. She is also concerned about large family gatherings for the upcoming holidays such as Thanksgiving and Christmas, she said.

“We have to start tighten things up,” she said. “We are coming into the most dangerous time of the year.”

The local offices of the Health Department have started a new web site to give local residents more information about testing and other COVID related services. The website is http://monroe.flhealth.gov/covid19. 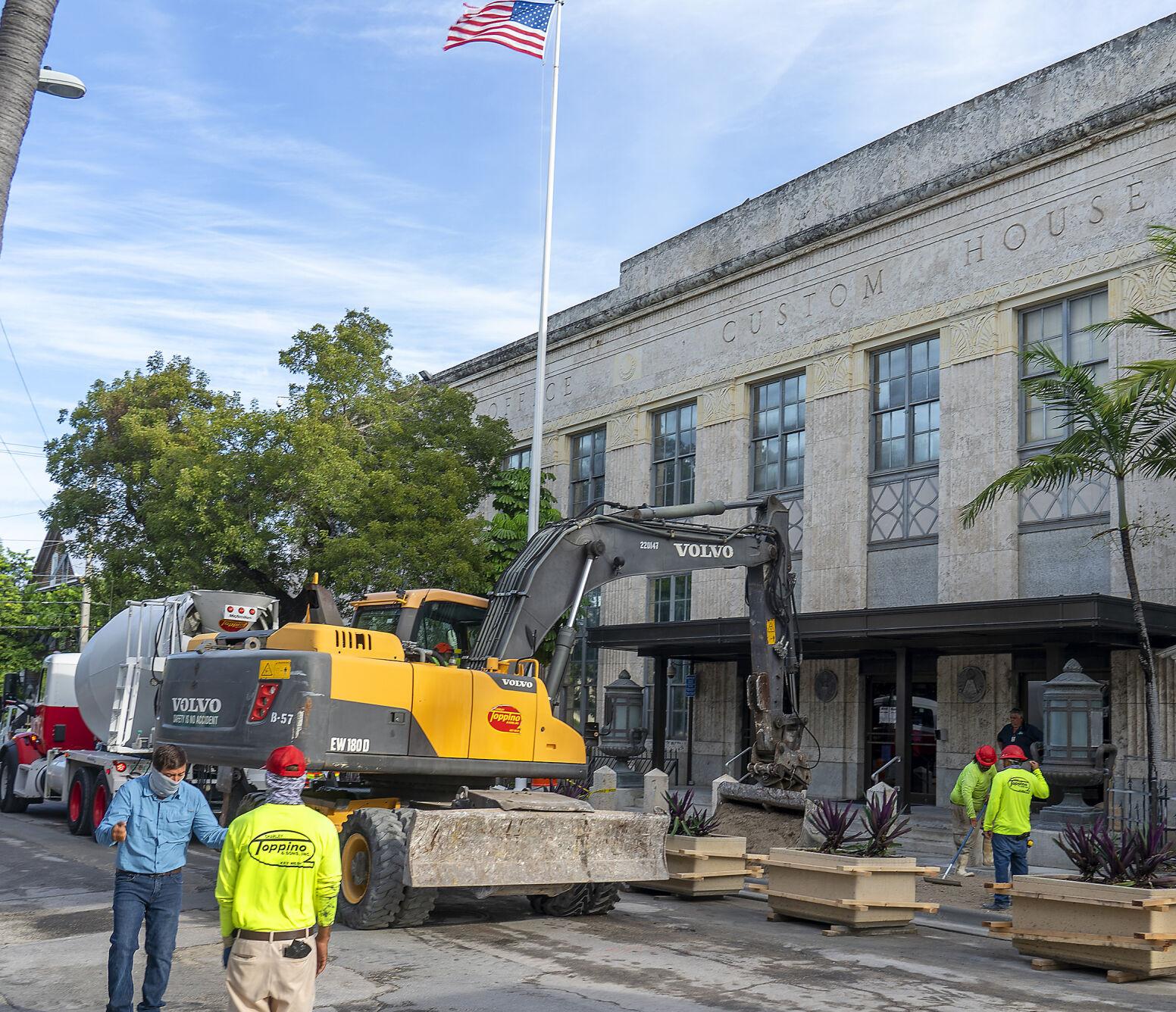 Paving crews with the City of Key West on Friday work in the 300 block of Simonton Street. The project began before the repaving of Duval Street earlier this year, but water pipes from the Florida Keys Aqueduct Authority first needed replacement from Southard Street to Front Street. Additionally, ADA requirements regarding sidewalks and crosswalks must be completed before final paving can begin. Elsewhere in the city, work has also been done on Northside Drive and 20th Street. In 2019, the City of Key West completed roughly $4 million worth of paving work across the island. 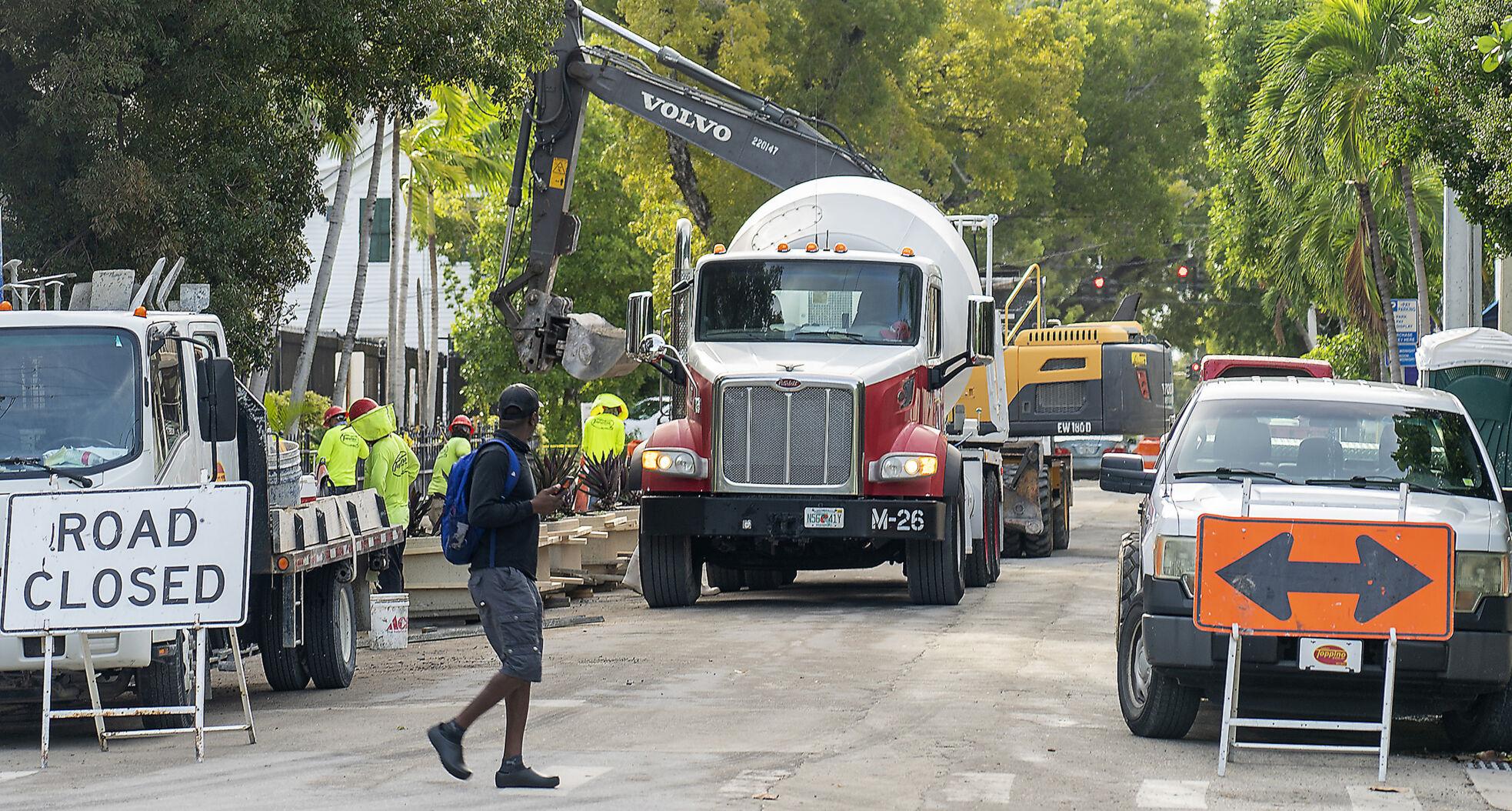 Forecasters at the National Weather Center in Key West are predicting tropical storm conditions this weekend as Eta swirls and twirls toward Cuba and Florida.

On Friday, Tropical Storm Eta was centered east of Belize City, nearly 600 nautical miles from Key West. The storm, with maximum sustained winds of 35 mph, was moving north-northeast at 6 mph.

A small craft advisory is in effect for all coastal waters of the Florida Keys due to winds of 20 knots to 25 knots, with occasional gusts approaching 30 knots to be expected.

Isolated thunderstorms are possible for the area through Tuesday, as the storm approaches the Straits of Florida from the Western Caribbean, and tropical storm-force winds are expected to begin Sunday.

Widespread rainfall over the next seven days could be in the range of 5 to 15 inches, according to the NWS.

Lead forecaster Chris Rothwell said recognizance aircraft was being sent to gather data on Friday afternoon to aid in forecasting the track and timing of the storm.

Gerald Adams Elementary students thank Conquer Hunger on Weekends for their headsets and food in their bellies.

“Rumbly in my tumbly” alludes to Winnie the Pooh’s desire and search for more honey to fill his belly; Monroe County students, unfortunately, also experience that “rumbly.”

Almost 1,100 Florida Keys students are unsure from where their next meal is coming, according to the Monroe County School District.

Hunger can leave students anxious and unable to concentrate in class. Federal and state programs aim to alleviate food insecurity, and several non-profit organizations have stepped up to help ensure no children go hungry.

In the school system, breakfast and lunches are free for all students with no applications necessary. Every student is welcome to enjoy the cafeterias’ offerings, as well as snacks during recess or break times, thanks to the U.S. Department of Agriculture’s programs.

Community organizations have stepped up to provide backpacks containing food for the weekends.

Monroe County Schools Superintendent Theresa Axford, at the Oct. 26 school board meeting, spoke about City of Key West focus groups at which teachers and administrators shared that hunger was a growing problem in the schools.

Axford provided numbers of students throughout the district who worry about meals. From the Southernmost City to the north of our district, the number of students with food insecurity as of Oct. 26 were: 200 at Key West High School; 50 at Horace O’Bryant; 90 at Poinciana; 129 at Gerald Adams Elementary; 50 at Sugarloaf School; 150 at Stanley Switlik Elementary; 60 at Marathon; 50 at Plantation Key; 75 at Coral Shores High and 150 at Key Largo School, district research shows.

Sugarloaf School recognized WinnDixie of Big Pine Key. “Over the years, the WinnDixie organization has donated time, money and food to the campus and community, both after Hurricane Irma and through this current school year. Most recently WinnDixie helped celebrate teachers by supplying the fixings for a barbeque lunch. “Their support and encouragement was just what the staff needed,” Axford said. “Also, after Hurricane Irma, WinnDixie staff volunteered to help organize the relief warehouse that was set up at Sugarloaf School campus.

As well, Peace Covenant Presbyterian Church of Key West donated $3,000 to Horace O’Bryant School to support the purchases of supplies, Thanksgiving baskets for families and jackets for kids in need as cooler weather approaches.

“These are bags we would normally have given out at community events,” said KEYS spokesperson Julio Torrado. “Since many of these events were canceled due to the pandemic, we thought this was a great way to use them. Food insecurity in our community should be something we are all concerned about,” he said.

The backpacks donated by Keys Energy Services will specifically be used to help provide breakfasts and lunches to all students who need them to help bridge the gap over the Thanksgiving recess as well as on weekends and over other holiday breaks.

When you look up and you hear the fighter jets overhead, know there will be a new commanding officer in charge of the Fighter Squadron Composite (VFC) 111.

Ashlock has accumulated more than 11,000 flying hours with 3,000-plus in fighter aircrafts. He is a graduate of the U.S. Navy Fighter Weapons School Adversary class and he has been awarded the Air Medal, Navy Commendation Medal and the Navy Achievement Medal, as well as numerous other personal and unit awards.

“I’ve been here close to a decade, so I’m very familiar with the squadron and it’s just a vertical movement in the squadron,” Ashlock said.

Ashlock is a graduate of Missouri Western where he earned his bachelor’s degree in Electrical Engineering and was commissioned in 1988.

Following flight school at NAS Whiting Field, where he was awarded his wings of gold and designated a Naval Aviator in April 1991.

Ashlock’s initial fleet assignment was with the Mighty Shrikes of VFA-94 flying F/A-18 Lot XII Hornets from 1992-1996, where he was deployed twice aboard the USS Abraham Lincoln and once aboard the USS Kitty Hawk. During this time, the Mighty Shrikes deployed to the Persian Gulf and flew combat missions in support of Operation Southern Watch, enforcing the Iraqi no-fly zone.

After his third deployment, Ashlock was selected to become an instructor pilot.

Eleven years after leaving active duty service, Ashlock entered the Naval Reserve in Fort Worth, Texas. From there, he was an instructor pilot in Kingsville, Texas, and in 2012, he joined VFC-111 in Key West, where he served as the Safety Officer, Training Officer, Administrative Officer and Operations Officer. Since completing his department head tours, he has served as the Executive Assistant to the Training Department.

In March 2017, Ashlock was selected for command of VFC-111 and he said he looks forward to the challenge in his new position.

“We’re the most active and busiest adversary squadron in the world and Key West is a wonderful environment for us to fly in. Our slate for the next 15 months is extremely full,” Ashlock said.

Ashlock is married to his wife, Susan, of 31 years and they have a son, Jacob, who attends Texas Tech University in Lubbock, Texas.

Meritt, a native of Denver, Colorado, graduated from the University of Kansas in 2001 and was commissioned through the Naval Reserve Officer Training Corps Program and received flight training in Pensacola, Florida. He earned his Naval Aviator designation in June 2004.

Meritt began his operational flying in February 2005 and made two deployments aboard the USS Ronald Reagan and participated in Operation Iraqi Freedom. He became an instructor in 2008. In 2011, he joined the VFC-111 in Key West and he was selected as the recipient of the Tactical Support Wing Leadership award, the Ryon Award in 2016. His other career awards include Defense Meritorious Service Medal, Strike/Flight Air Medal, Navy Commendation Medal (3), and the Navy/Marine Corp Achievement Medal (3). He reported to VFC-111 as the Executive Officer in May of 2018.

Meritt’s next assignment is with the Tactical Support Wing (TSW) in San Diego, California.