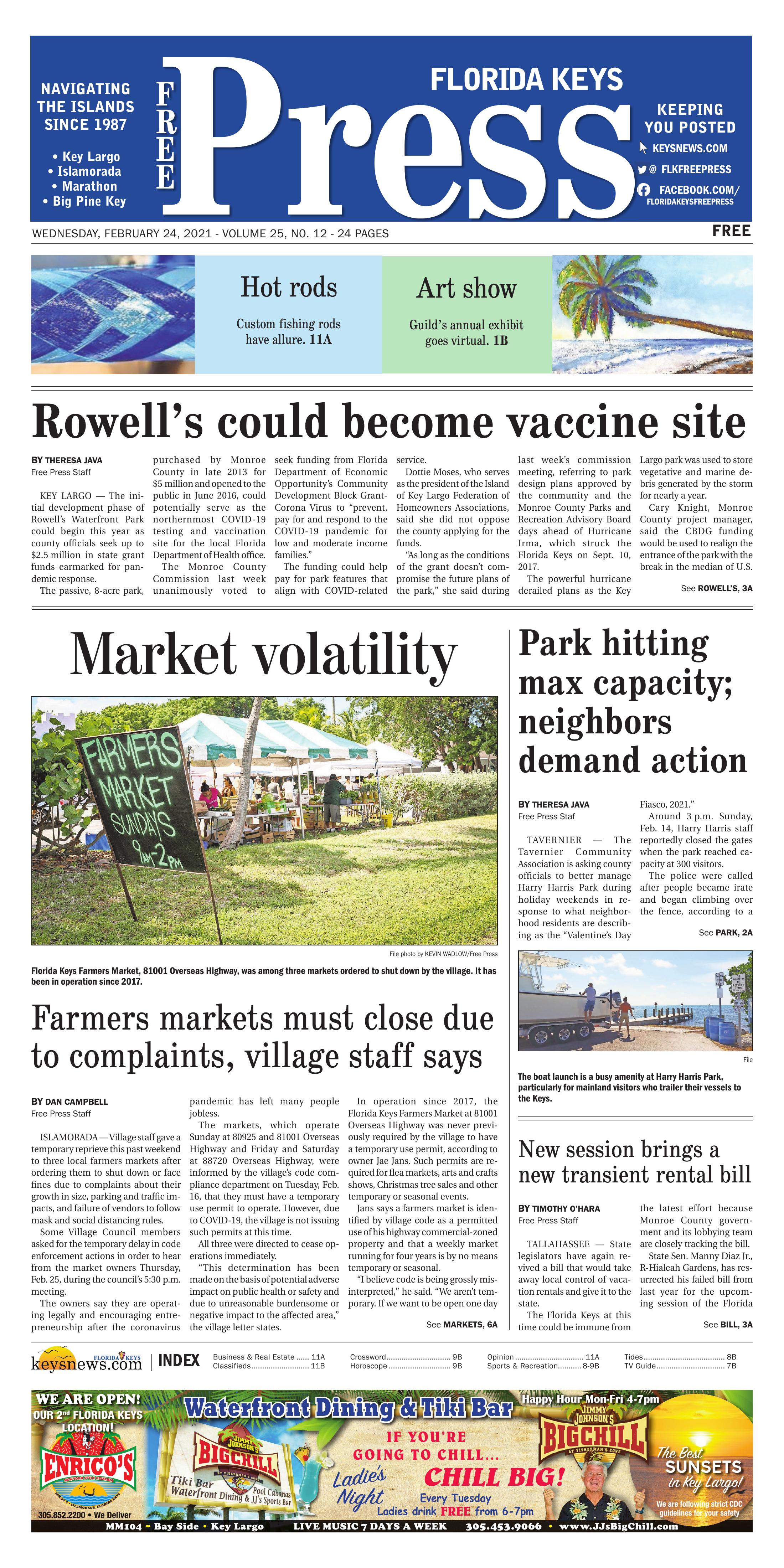 KEY LARGO — The initial development phase of Rowell’s Waterfront Park could begin this year as county officials seek up to $2.5 million in state grant funds earmarked for pandemic response.

The passive, 8-acre park, purchased by Monroe County in late 2013 for $5 million and opened to the public in June 2016, could potentially serve as the northernmost COVID-19 testing and vaccination site for the local Florida Department of Health office.

The funding could help pay for park features that align with COVID-related service.

Dottie Moses, who serves as the president of the Island of Key Largo Federation of Homeowners Associations, said she did not oppose the county applying for the funds.

“As long as the conditions of the grant doesn’t compromise the future plans of the park,” she said during last week’s commission meeting, referring to park design plans approved by the community and the Monroe County Parks and Recreation Advisory Board days ahead of Hurricane Irma, which struck the Florida Keys on Sept. 10, 2017.

The powerful hurricane derailed plans as the Key Largo park was used to store vegetative and marine debris generated by the storm for nearly a year.

Cary Knight, Monroe County project manager, said the CBDG funding would be used to realign the entrance of the park with the break in the median of U.S. 1 so traffic can easily access the multifunctional building with a six-headed bathroom, designed with funds from the Florida Department of Transportation, at the entrance of the park.

In the next phase, the CBDG funding would go toward enhanced directional LED lighting, additional power sources, sidewalks adequate for social distancing, a wireless network and additional parking spaces to be used to implement a vaccine program in partnership with the Department of Health.

“This is a great opportunity for up to $2.5 million that parallels the existing plans for the park,” Knight said.

According to Assistant County Administrator Kevin Wilson, the county is days away from seeking requests for proposals on the buildout of the multifunctional building.

“We are still moving forward with the plans that we drew up with [consultant] Jack Kardys,” he said.

Florida Keys Farmers Market, 81001 Overseas Highway, was among three markets ordered to shut down by the village. It has been in operation since 2017.

ISLAMORADA — Village staff gave a temporary reprieve this past weekend to three local farmers markets after ordering them to shut down or face fines due to complaints about their growth in size, parking and traffic impacts, and failure of vendors to follow mask and social distancing rules.

Some Village Council members asked for the temporary delay in code enforcement actions in order to hear from the market owners Thursday, Feb. 25, during the council’s 5:30 p.m. meeting.

The owners say they are operating legally and encouraging entrepreneurship after the coronavirus pandemic has left many people jobless.

The markets, which operate Sunday at 80925 and 81001 Overseas Highway and Friday and Saturday at 88720 Overseas Highway, were informed by the village’s code compliance department on Tuesday, Feb. 16, that they must have a temporary use permit to operate. However, due to COVID-19, the village is not issuing such permits at this time.

All three were directed to cease operations immediately.

“This determination has been made on the basis of potential adverse impact on public health or safety and due to unreasonable burdensome or negative impact to the affected area,” the village letter states.

In operation since 2017, the Florida Keys Farmers Market at 81001 Overseas Highway was never previously required by the village to have a temporary use permit, according to owner Jae Jans. Such permits are required for flea markets, arts and crafts shows, Christmas tree sales and other temporary or seasonal events.

Jans says a farmers market is identified by village code as a permitted use of his highway commercial-zoned property and that a weekly market running for four years is by no means temporary or seasonal.

“I believe code is being grossly misinterpreted,” he said. “We aren’t temporary. If we want to be open one day a week that’s our decision on how best to run our business, not the village’s. Where do you draw the line?”

Village Development Services Director Ty Harris said the village doesn’t want to be the bad guy but can’t allow these events, which he describes as “unlicensed flea markets,” to continue in their current form.

“These locations are not just selling locally grown farm products,” he said. “They have expanded into food vendors, clothes, merchandise, etc. Additionally, they are way out of their business footprint and parking across the highway and on properties that have not given them permission to use their lots.

“We have been patient for the last few weeks to see if they could get closer to a ‘farmers market,’ but unfortunately they haven’t been able to do so.”

Harris attributed at least one traffic accident to the markets and said numerous tickets have been written by the Monroe County Sheriff’s Office for market customers parking on the bicycle path next to U.S. 1.

Jans acknowledges that his market has seen an uptick in customers since January, as tourist season has hit full stride. However, he and Mike Anzalone, who operates a market on an adjacent commercial property, say they have taken steps to improve parking accommodations, including setting up traffic cones and hiring parking attendants to instruct market visitors about restrictions on parking on the right-of-way or neighboring properties. They are also being vigilant about enforcing mask wearing, Anzalone added.

Both say their markets provide an important opportunity for locals to make a living in today’s unpredictable economic climate, including several people who have lost jobs due to COVID-19.

“Some of their stories have touched my heart,” said Anzalone, who says a top village administrator told him no permit was required when he inquired a few months ago about opening his market.

One of his vendors is a single mother who supports her family by selling smoothies; another is a former soldier who makes and sells pickles, Anzalone said.

He and Jans note that farmers markets elsewhere in the Keys regularly offer more than just foodstuffs.

Jans estimates that 50 to 100 vendors between the three markets will be shut down by the enforcement of the temporary use permit requirement. 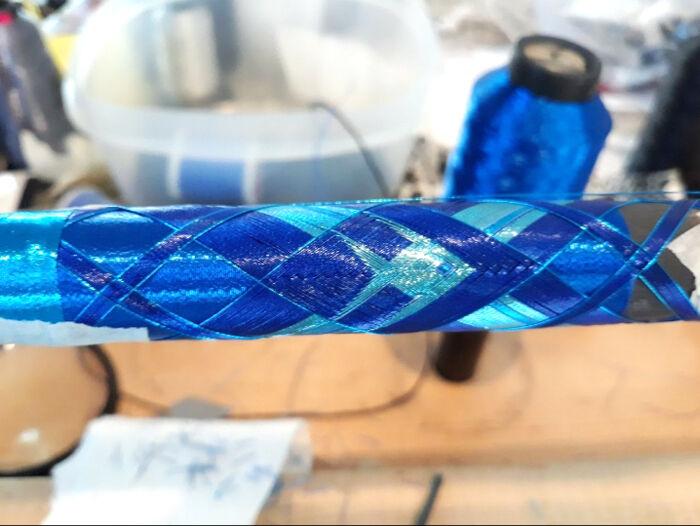 Custom fishing rods have allure. 11A

TAVERNIER — The Tavernier Community Association is asking county officials to better manage Harry Harris Park during holiday weekends in response to what neighborhood residents are describing as the “Valentine’s Day Fiasco, 2021.”

The police were called after people became irate and began climbing over the fence, according to a letter from the TCA to the Monroe County Commission.

TCA president Rick Richter said park visitors have steadily increased over the years and seemingly exponentially since the COVID-19 pandemic.

“Over the years, there’s been more and more people there and it’s just one step closer to the park being out of hand. I’ve seen it packed before but nothing quite like this. It’s a huge park. It gets chaotic in there, which creates friction among people,” he said.

“It’s on weekends, particularly if it’s a three-day weekend. There’s a major increase in activity there. They expanded the boat trailer parking and more people are launching boats there. With more tourism since COVID-19, there needs to be more assessments on the safety of that park. The county needs more active management for kids to go and have a safe place and have a good time.”

The TCA has requested that Monroe County officials internally review the situation and schedule more staff accordingly. The association has also asked that the county coordinate with the Monroe County Sheriff’s Office to increase its presence around the park.

There is already is a strong police presence at the park, according to sheriff’s spokesman Adam Linhardt.

“We had four calls for service at the park that day,” he said. “One gentlemen called to say he was not being let in, then there was a call saying the attendant was being mistreated. There was no riot. There was no melee and there was no issue. People wanted in and the park was at capacity and that’s the extent of it.”

Since Jan. 1, 2020 there has been 250 calls to the park, 180 of those were police generated for watch orders, according to Linhardt.

“The rest were to assist citizens with vehicles usually,” Linhardt said.

“We usually have three people working there per shift at least,” he said. “The park hit capacity. There is a limit to 300 people and there is a sign posted next to the entrance. For the next few weekends, we will hire off-duty police officers to provide security which does come at a cost. Hopefully, we won’t need them for too long.”

County Commissioner Mike Forster is sponsoring an item on the March agenda to address park management, according to Wilson.

Harry Harris Park collects $30 per boat and $5 per person for entry.

“We want to be good community partners,” Sheriff Rick Ramsay said. “We are going to do what we can to help the county manage the park.”

TALLAHASSEE — State legislators have again revived a bill that would take away local control of vacation rentals and give it to the state.

The Florida Keys at this time could be immune from the latest effort because Monroe County government and its lobbying team are closely tracking the bill.

State Sen. Manny Diaz Jr., R-Hialeah Gardens, has resurrected his failed bill from last year for the upcoming session of the Florida Legislature. The bill would remove local control of transient rentals and place it in the hands of the state as of January 2022.

“A local law, ordinance or regulation may not allow or require the local inspection or licensing of public lodging establishments, including vacation rentals, or public food service establishments.”

However, the proposed bill does “not apply to any local law, ordinance or regulation adopted on or before June 1, 2011,” which would cover the current transient rental laws in Monroe County and in each of the Keys municipalities.

Monroe County Legislative Affairs Director Lisa Tennyson addressed the bill at last week’s Monroe County Commission meeting. Tennyson called it a “live wire” and said she would like to see its language tightened up and strengthened to better protect the Keys from state government preemption.

Tennyson and the county’s lobbying team will monitor the bill to make sure the Keys remain exempt, Tennyson said.

The Florida Senate’s Regulated Industries Committee passed the bill last week. The Florida House of Representative’s companion bill, H.B. 291, was passed by the House Regulatory Reform Subcommittee earlier this month and is in the House’s Ways and Means Committee.

For more than a decade, a bill has been filed each year in the state Legislature to preempt local control of transient rentals. Each time, legislators have either shot down the bill or made immune local governments that already have their own ordinances addressing the transient rentals.

The Monroe County code department, the local offices of the Tax Collector’s Office and the State Attorney’s Office have partnered on various efforts to root out and stop illegal transient rentals, which remain a problem in the Keys.

Keys residents and elected officials are concerned that the state lacks the local resources to handle regulating transient rentals, which can create disturbances late into the night in residential neighborhoods. Transient rentals also take away from the Keys’ limited affordable housing pool.

The issue pits large corporations such as Airbnb against residents, which do not have corporate lobbyists at their disposal.

Last year, the Florida-based Our Neighborhoods fought the preemption bill and sent out an email blast that details how Arizona state legislators took away local control of transient rental regulation, but three years later reinstated local control after they realized it was a mistake to take it away.