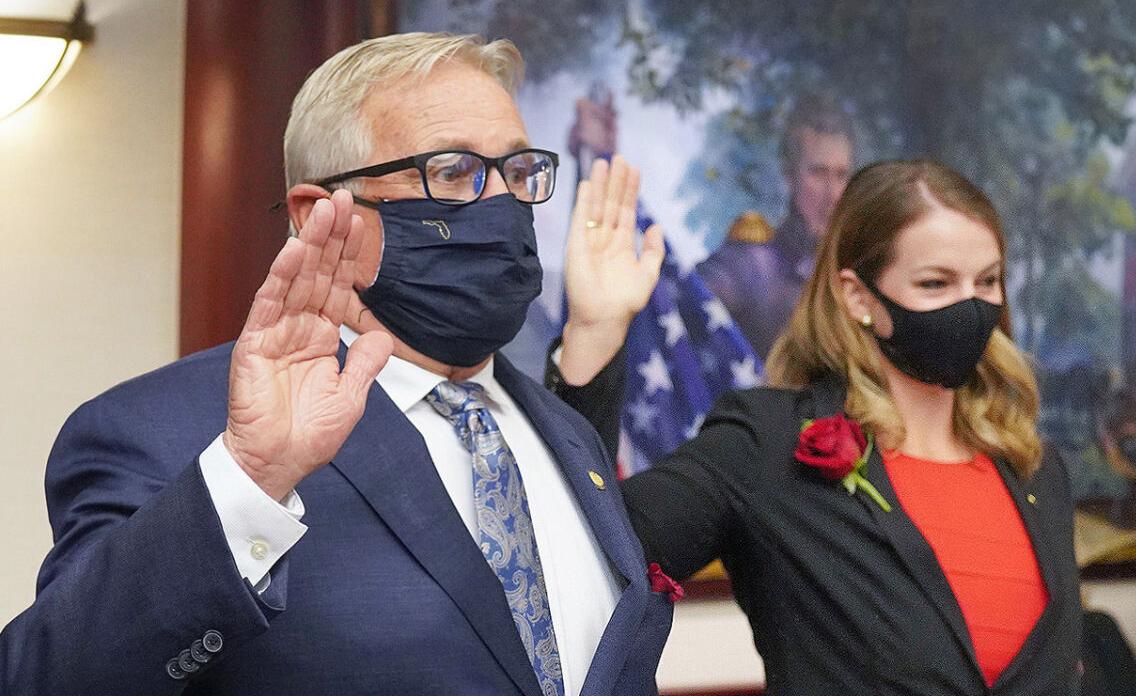 Newly elected Florida House of Representatives members Jim Mooney and Fiona McFarland are sworn in by Justice Ricky Polston during an organizational session in November.

ISLAMORADA — Recently-elected state Rep. Jim Mooney has not wasted any time throwing himself into his new job.

Since the November election, the Islamorada Republican has journeyed to Tallahassee, been sworn in, attended orientation meetings and set up logistics like internet and computer capabilities, an apartment and staff. The apartment is within walking distance of the Capitol, he said. He replaces Holly Raschein in the District 120 seat.

Mooney has been assigned to the State Affairs Committee as well as the Infrastructure and Tourism Appropriations, Early Learning and Elementary Education, Post-secondary and Lifelong Learning, and Finance and Facilities subcommittees, which begin to meet Jan. 11. He also expects to be assigned to the Environment, Agriculture and Flooding Subcommittee. He said his requests for appointment to the various subcommittees have been honored.

Mooney always has been interested in education. He served seven years as a teacher, guiding students in government and history, as well as physical education and serving as a coach at Coral Shores High School. He graduated from that school as well.

During orientation in Tallahassee, he met a lot of the new faces just like him.

“Everyone wants to do something good for their districts and the state. Several are young, so that’s good,” Mooney said.

He has met Gov. Ron DeSantis a few times, who he described as “a man of very few words.” He also met Chris Sprowls, the new speaker of the Florida House of Representative and expects him to be a “rock star,” describing him as young and intelligent.

“[Sprowls] cares about education and climate change,” Mooney said. “His view on education includes career training for those who don’t want to read Shakespeare. He’s a big believer that universities have to be better financial stewards and stop relying on raising tuition.”

Mooney also was impressed by several representatives from areas such as Naples, Fort Myers, Marco Island, Brooksville, Lake Placid, Jacksonville and the Panhandle, he said.

Mooney knows he is going to be busy, saying 160 bills have been filed so far for the upcoming legislative session, which runs from March 2 through April 30, but he thinks he may be able to arrange his schedule like Raschein did by traveling to Tallahassee on Mondays and returning to the Keys on Thursdays.

Among Mooney’s goals are ensuring that the Sadowski Act, created in 1991, remains as a dedicated revenue source for Florida’s affordable housing programs. The Republican-run Legislature has made a habit of raiding the fund to cover spending elsewhere.

“The need for affordable housing in Florida is greater than ever. These funds can aid in responding to the pandemic by helping Floridians who have lost employment due to COVID-19 stay in their rental housing and in their homes. It can also fund critical repair home programs, including emergency repair initiatives for low to moderate-income families,” according to the Sadowski Act’s Coalition website.

Florida Keys Stewardship funding for water quality also has to be protected from a slash of the budget, Mooney said.

“Monroe County had $10 million cut from [this funding source] this past year,” Mooney said.

He is heartened that the Monroe County and Keys municipalities have a reputation of using this money wisely.

Mooney’s district includes the Keys and portions of south Miami-Dade County, including the Redland, and he is aware of agricultural needs, and the importance of directing water to Florida Bay and not flooding fields and farmers’ wells.

He said it won’t take long to find out how “naïve I am.” He knows he is going to have to work with others on their goals while maintaining support for the goals of his constituents.

He also believes Florida, as a whole, has learned from the pandemic that it needs revenue sources from industry or services other than tourism — whether that means seeking and expanding space exploration opportunities or something else, he said.

One other issue Mooney expects the state will address may be the sales tax collection of online sales. He said mom-and-pop businesses feel it is unfair they have to collect sales taxes, while certain web vendors skirt the collection.

Mooney is looking forward to the work ahead of him, saying it will be intriguing. Assisting him is Nicholas Frevola as his legislative aide. Frevola is a Florida State University graduate and was an intern for Speaker Designate Representative Daniel Perez during the 2019 legislative session, and in 2018, for Speaker Pro Tempore and now Lt. Governor of Florida, Jeanette Nuñez, and Education Committee Chairman Michael Bileca.