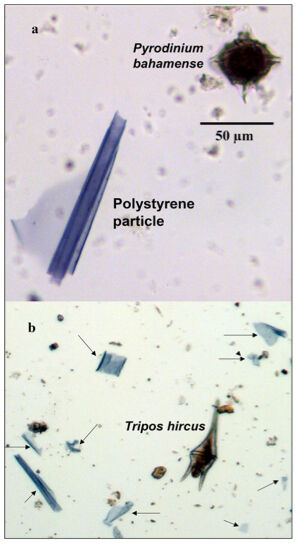 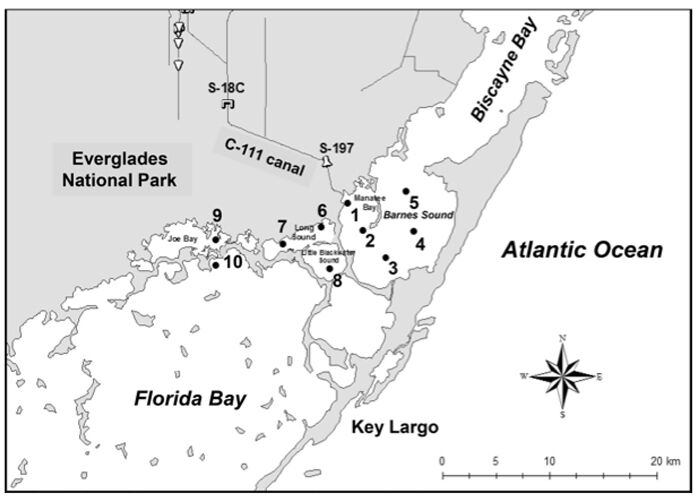 A map of the 10 sample sites where high levels of microplastics were found. 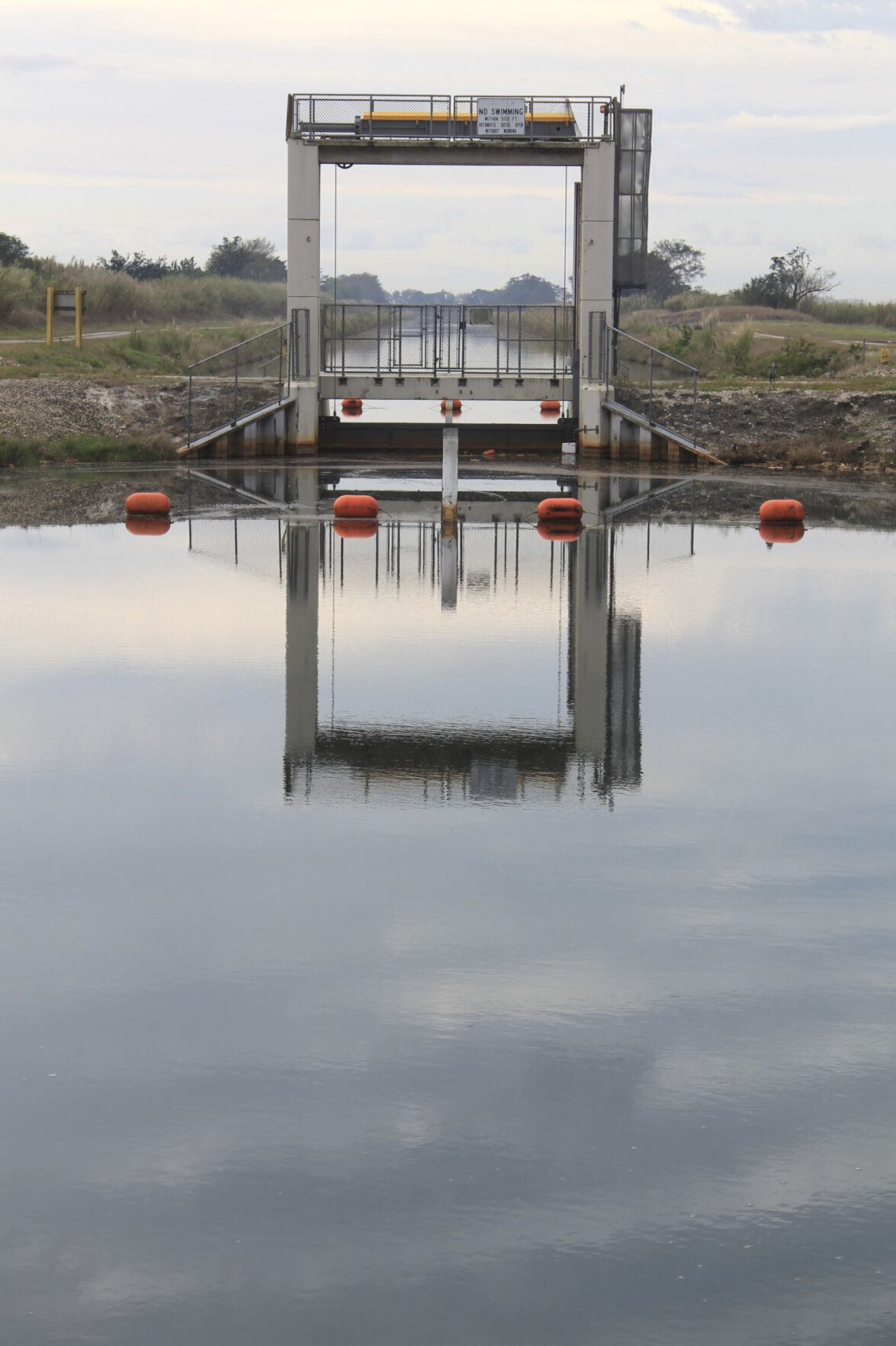 A study of water discharges into Barnes Sound and Florida Bay from South Florida Water Management District’s C-111, which runs between agricultural lands and marshes near Florida City and the eastern boundary of Everglades National Park, found microscopic plastic levels as high as the number of phytoplankton, which forms the basis of the food chain.

A map of the 10 sample sites where high levels of microplastics were found.

A study of water discharges into Barnes Sound and Florida Bay from South Florida Water Management District’s C-111, which runs between agricultural lands and marshes near Florida City and the eastern boundary of Everglades National Park, found microscopic plastic levels as high as the number of phytoplankton, which forms the basis of the food chain.

KEY LARGO — The discovery of microplastic-saturated waters off the northernmost island of the Florida Keys may have been a coincidental finding for researchers but was nonetheless shocking, according to University of Florida biologists who were sampling microplankton in the area.

Ed Phlips, a lead researcher on the study and a professor in the UF/IFAS School of Forest, Fisheries and Geomatics Sciences, said the sheer amount of foam-based plastics that suddenly appeared was jarring.

The microplankton study was conducted over a two-year period, from May 2018 to April 2020, across 10 sample sites in Barnes Sound and northeastern Florida Bay. The study was funded by the South Florida Water Management District to determine the impact of water discharges from the C-111 canal into the Keys.

“It was March 18 in 2019 when I suddenly noticed what looked like plastics in the water,” Phlips said. “I asked my colleague Susan Badylak if she thought it was important and she said ‘yes.’”

Microplastics, or particles less than 5 millimeters in diameter, are known to contribute to environmental stresses around the world, and the ones found in Barnes Sound and northeastern Florida Bay were polystyrene or foam-based.

Polystyrene is widely used in foam cups and to-go food containers and were initially found at six of the 10 sampling sites.

Filter feeding organisms like baleen whales, sponges and corals could be full of foam, researchers say.

“Specific to corals and microplastics, we can say this is a fast-emerging field of science and numerous papers have been published,” said Jennifer L. Koss, director of the NOAA Coral Reef Conservation Program. “We are coming to understand the impact of microplastics on various marine organisms and there is evidence that microplastics negatively impact phytoplankton. Phytoplankton are the foundation of the marine food web.

“The symbiotic algae living in coral tissues are phytoplankton as well so there is the potential corals will experience impacts on a very personal level. Additionally, corals are also filter feeders and a few papers have shown corals are ingesting microplastics, which contain harmful chemicals like BPAs, flame retardants and other known endocrine disruptors and carcinogens.”

Phlips first observed the polystyrene particles nearly into the second year of the phytoplankton study, with peak densities in the spring and summer of 2019 at all 10 sampling sites within the two lagoons.

“We had some polystyrene samples as high as 76,000 particles per liter. That saturation is similar to the concentration of microplankton, which is an important food source to filter-feeding organisms,” he said. “They were similar in size too. They were translucent and had a bluish tint to them.”

All of the samples reached 10,000 to 20,000 particles per liter or higher. The observation highlights the potential significance of the microplastic particles, if they persist, for the ecology of the waters of the Keys, according to Phlips.

May is the beginning of the rainy season in Florida, when freshwater discharges from the mainland increase. Effluent discharges from regional industries and other commercial activities in the northern Keys or adjacent mainland could explain the sudden appearance of high concentrations of the polystyrene microplastics, Phlips said.

“Southward flow of water from Biscayne Bay is also a potential source of microplastic contamination. However, there is insufficient information to define how the polystyrene microplastics spread to both Barnes Sound and northeastern Florida Bay, where high densities of the particles were observed in the same month,” he said. “The reality is that we don’t know what the source is.”

Hurricane Irma, which crossed the Lower Keys in 2017, could have pushed a large amount of material into the region. The plastic the researchers observed looked like fragments of what was once larger material but no specific evidence was found. Larger plastics are common shoreline contaminants and are particularly evident along the Atlantic Ocean side of the island chain.

The microplastics concentrations may be an episodic or a regular event, which would have a larger impact. By the fall of 2019, the polystyrene had either dissipated or was swept further out to sea.

“It would be nice if people kept their eyes out to see if this is a recurring event. There is a general worldwide recognition that microplastics will impact the environment. We’ve done studies before and we never observed this type of plastics. This will impact marine life,” Phlips said.

The finding was also a surprise to Emma Haydocy, executive director of Florida Bay Forever, which advocates for water quality improvements to the bay.

“Florida Bay is already on life support due to a lack of freshwater and the catastrophic die-off on the central bay in 2015. The findings of the study on microplastics are incredibly disturbing and serve as a stark reminder of the impacts we as humans have on the ecology of our waters. We must do everything in our power to protect the health of Florida Bay,” she said. “While microplastics are present globally in marine environments, this is the first study to my knowledge that shows this level of density on Florida Bay, particularly regarding the size of plastics relative to the microplanktonic algae that we know is the foundation of life on the bay.”