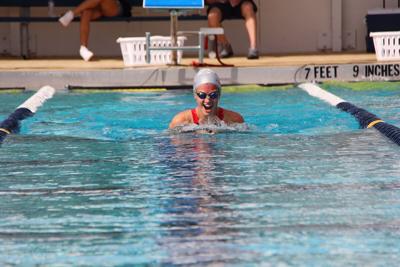 MONROE COUNTY — Twenty-one of the girls from the Key West High School swim team set personal records during the District 12-2A Finals, while 13 more personal bests were eclipsed by the boys during the afternoon meet at Gulliver Prep.

That was enough not only to advance 25 different Conch swimmers into the Region 4-2A Finals, but also helped Key West claim both runner-up trophies during the postseason event.

“We had an outstanding meet,” said Key West coach Lori Bosco. “We are still coming home with hardware, it’s just a virtual hardware we can’t quite see yet, but it still feels just as good. They really left it all in the pool.”

In total, 25 Key West swimmers qualified for the region finals, while Coral Shores High School had 11 Hurricanes swim to low enough times to advance out of the District 16-1A finals.

The 25 Key West swimmers will be entered into 36 different events, led by freshmen Katelyn Noss and junior Grace Defelice, who each advance in two events, while the boys had Sid Singh, Marcos Montiel, Lucas Montiel, John Searcy and Luke Klettheimer each reach the region round in a pair of swims. Noss moved on in the 200-IM as well as the 100 backstroke, while Defelice made it in the 50 and 100 freestyles. Singh, a senior, made it in the 200 freestyle and 100 breaststroke; Lucas Montiel in the 50 and 100 freestyles; his twin brother, Marcos, in the 200 freestyle and 100 butterfly; Klettheimer in the 100 backstroke and 500 freestyle; and Searcy in the 10 backstroke and 100 butterfly.

Other Lady Conchs who will be advancing include Sofia David and Lauren Waterson in the 200 IM; Ocean Leto, Alexsandra Turek and Jaelyn Dillard in the 100 butterfly; Serena Sander, Ana David and Isabella Johnson in the 100 breaststroke; Isabella Barr in the 500 freestyle, while the 400 freestyle relay, 200 freestyle relay and 200 medley relay teams also swam their way into the region meet. On the boys side, Ryan Martinez made it in the 200 IM; Stryder Graft in the 50 freestyle; Gabe Williams, Finn Blum and Nathan Frank in the 500 freestyle; and Jon Gvili and Alexander Robertson in the 100 breaststroke. The 200 medley relay and 200 freestyle teams both advanced.

Both the Hurricanes and Conchs entered in the region finals will have to swim another personal best, like the 34 personal records set by the Conchs in the district finals, in order to gain a berth in their respective state final races.