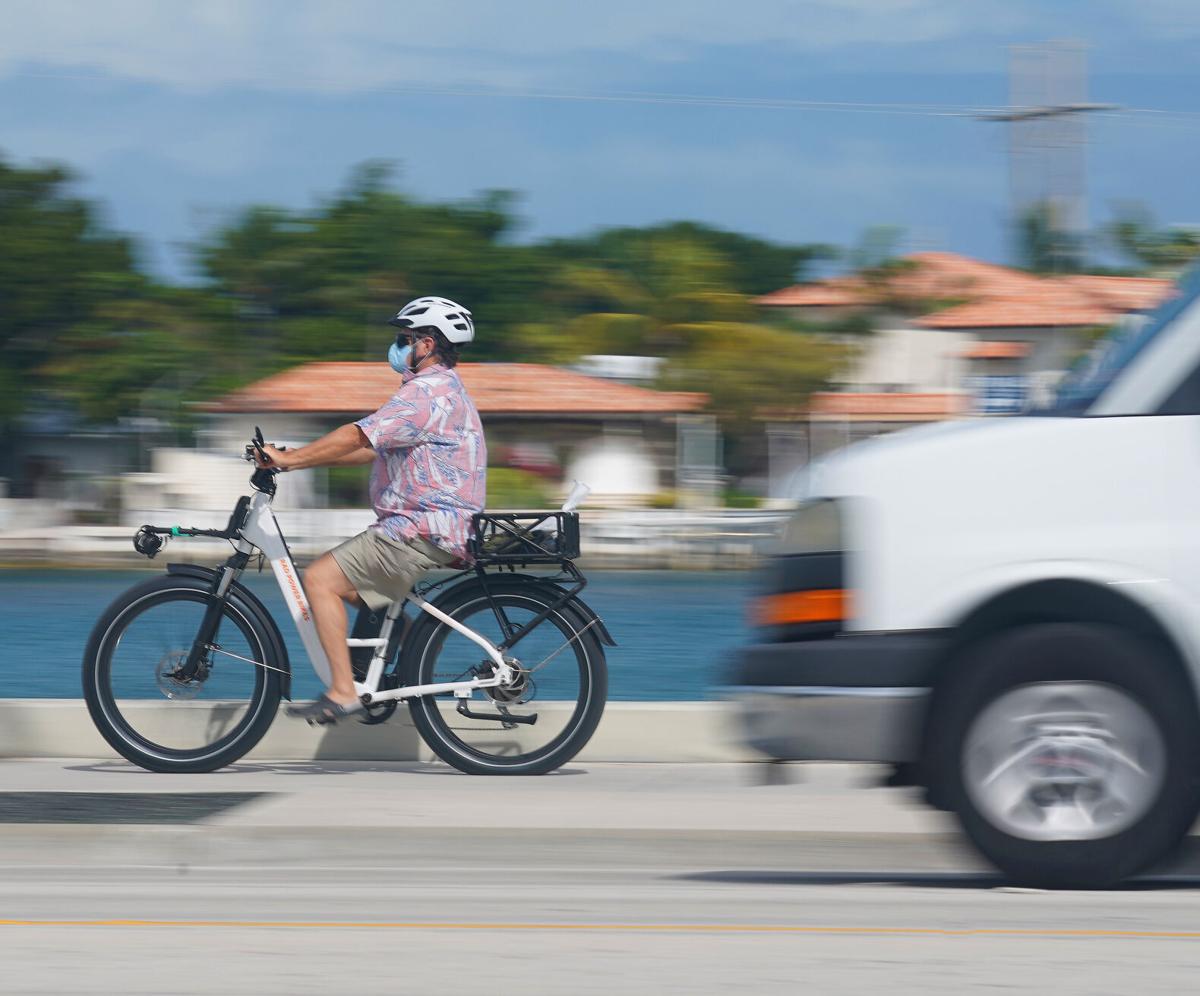 Electric bicycles and standup scooters have grown steadily in popularity across the country. Their increasing presence has come to the attention of the Key West City Commission. 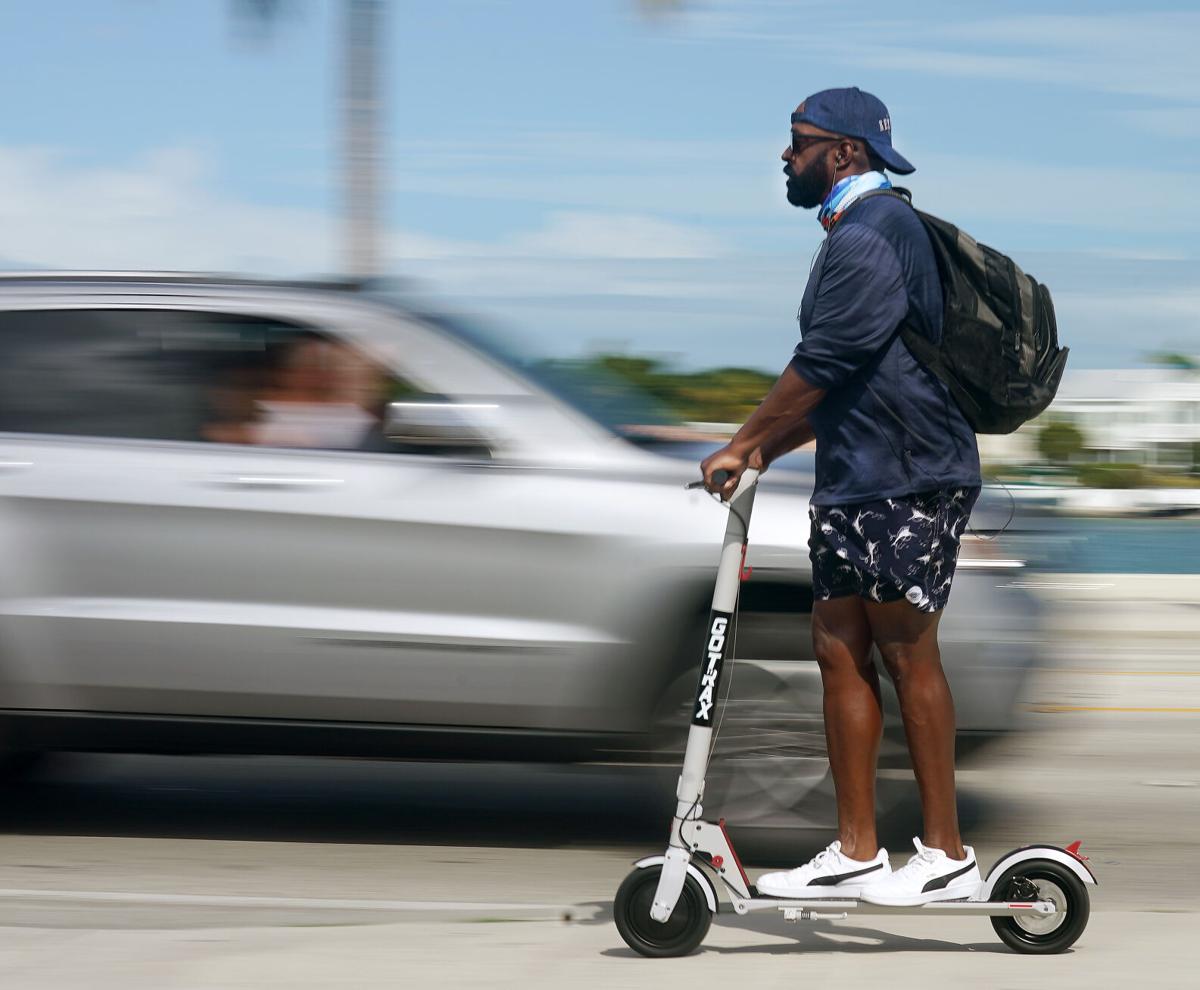 Key West City Commissioners will look at imposing regulations on the popular electric bikes and scooters at their Wednesday, Feb. 17, meeting. 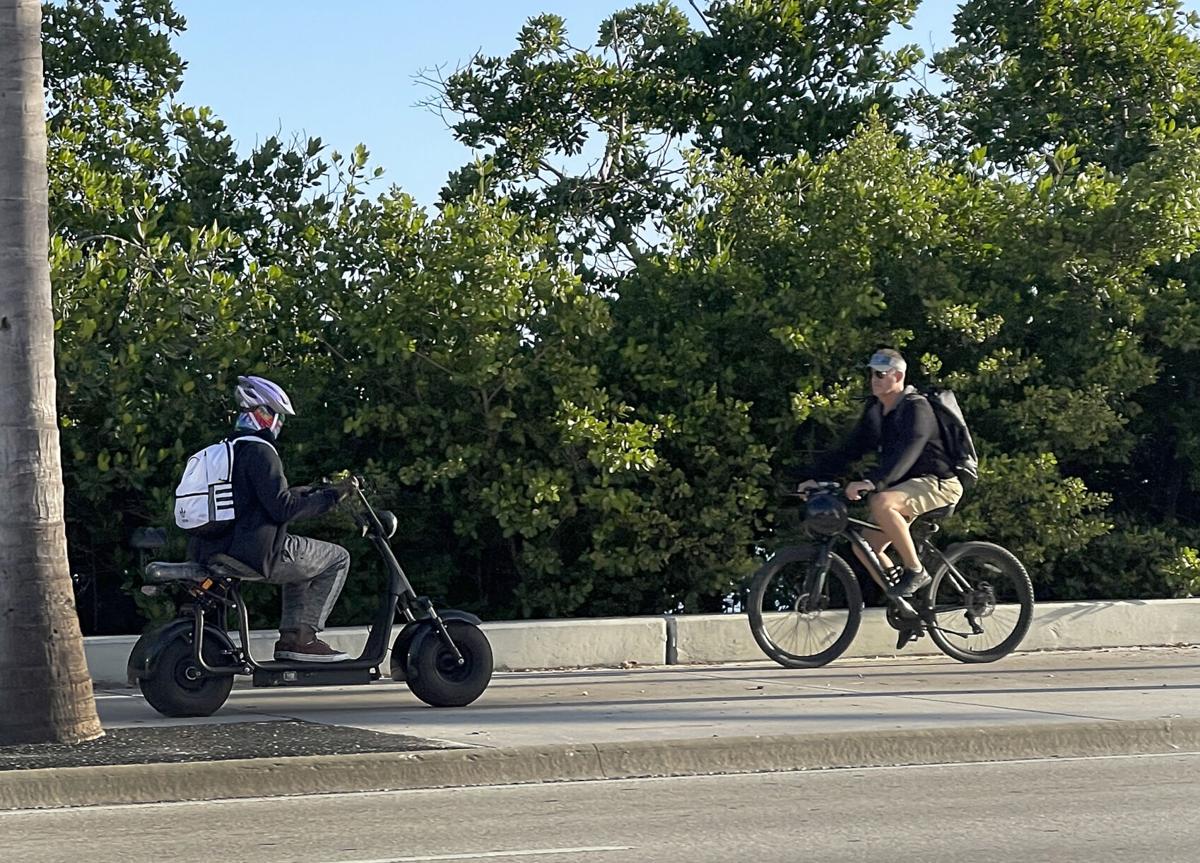 An electric scooter rider and traditional bicyclist prepare to pass near the Marriott Beachside Resort on North Roosevelt Boulevard.

Electric bicycles and standup scooters have grown steadily in popularity across the country. Their increasing presence has come to the attention of the Key West City Commission.

Key West City Commissioners will look at imposing regulations on the popular electric bikes and scooters at their Wednesday, Feb. 17, meeting.

An electric scooter rider and traditional bicyclist prepare to pass near the Marriott Beachside Resort on North Roosevelt Boulevard.

Several issues that Key West City Commissioners have been discussing for years are slated for action at Wednesday’s meeting.

A proposed ordinance regulating the use of electric bicycles and scooters is scheduled for a first reading, after first being proposed in February 2020. Commissioners will also vote on an ordinance limiting the use of gas-powered leaf blowers in the historic district, with some exceptions. And a final vote on the long-awaited rezoning of the 3.2-acre parcel in Bahama Village, slated to become an affordable housing complex, is on the agenda, as well.

The meeting will be held in-person at 5 p.m. in the city commission chambers at City Hall, 1300 White St. It can also be viewed virtually on the city’s web site, http://www.cityofkeywest-fl.gov, or on Comcast channel 77 and ATT channel 99.

The first reading of the proposed electric bike/scooter ordinance includes regulations that would keep the e-vehicles off of city sidewalks, unless that sidewalk is specifically designated for multi-use. While state statutes allow electric bikes and scooters vehicles the same rights as non-electric bicycles, which can operate on sidewalks, Key West has chosen to interpret those statutes as allowing local authorities to regulate where the vehicles can and cannot go.

The ordinance also limits the speed of the electric bikes to 20 mpg. Electric scooters are allowed a top speed of 28 mpg.

“The city wants to encourage alternative means of transportation within the city to reduce automobile traffic and alleviate parking issues in a manner which will encourage the use of electrical bicycles, motorized scooters, and micro mobility devices in the public right-of-way in a manner which will better promote the safety and general welfare of the city,” the proposed ordinance reads.

City Attorney Shawn Smith had originally brought a proposed e-vehicle ordinance to city commissioners last December. However, Mayor Teri Johnston sent it back, saying the ordinance included no data on sidewalk safety, where the vehicles could operate and how the city would monitor them.

Commissioners will also be taking up for the second time an effort led by Commissioner Jimmy Weekley to eliminate the use of gas-powered leaf blowers in specific areas of Key West. Weekley attempted to curtail the use of leaf blowers several years ago but his proposal was not supported by a majority of the commission.

The proposed ordinance, also up for a first reading, says that because of “numerous complaints” from residents in the Historic Preservation District over noise and blowing dirt, gas-powered leaf blowers cannot be used on properties less than a half-acre in size. That would limit the use of the loud blowers primarily to the larger commercial properties within the historic district. Gas-powered blowers also cannot be used within 50 feet of a residential property in the historic district.

Citing the “adverse psychological and physiological effects on humans,” Weekley is also proposing that all leaves, dirt or any other debris blown onto public property or in the public right-of-way must be cleaned up and removed within 30 minutes. And leaves and other debris cannot be blown or swept into city storm drains.

“All this does is ban the gas-powered ones. [People] can still use the electric and battery ones,” Weekley said about the hand-held blowers.

The reason the restrictions are limited to the historic district is because the buildings there are closer to each other than in other sections of the city, Weekley added. In addition to the loud noise produced by the gas-powered blowers, they are able to push dirt, dust and other debris into adjoining properties, he said.

“The gas blower is a lot stronger. So, particles are blown further,” he said, adding, “It doesn’t go into effect until April 5. That gives [users] time to switch out their equipment.”