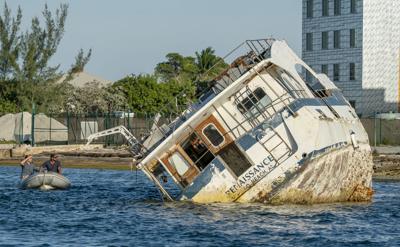 The state Legislature has approved a bill that would require boaters in the Florida Keys who are not in a mooring field to move their vessels every 90 days. The bill now awaits the governor’s signature.

The bill was recently amended to require 300 new mooring balls be placed about a mile around Key West before the legislation is implemented. The amendment calls for the city of Key West to increase its mooring field by 50 moorings and that 250 new moorings be added around Key West.

Florida Fish and Wildlife Conservation Commission member and Key West attorney and developer Robert Spottswood, who was involved in the crafting of the bill, questioned whether 300 new moorings could be placed in a one-mile area around Key West.

Spottswood will ask to hold public workshops and then possibly go back to the state Legislature next year to ask for a reduction if the 300 can’t be accommodated, he said.

“We will to try create as many as we can,” Spottswood said. “I don’t think the city mooring field can accommodate 50 additional moorings.”

“If we can get 300 mooring balls, that would be awesome,” Cates said. “We are still working on a location.”

Florida legislators crafted a bill this session that requires boaters outside Keys mooring fields to move their vessels every three months. The bill was prompted by concerns about the number of boats that become derelict in the Keys each year and eventually sink or become navigational hazards and have to be removed with boater improvement funds that could be used for infrastructure projects such as channel markers and boat ramps.

However, live-aboard boats have become a source of affordable housing in a chain of islands where monthly rental costs can exceed $1,500 for a one-bedroom apartment. Such concerns and a lack of mooring balls in Key West’s mooring field led to state legislators amending the legislation to require the 300 additional moorings.

The county’s Marine Resources Division estimated that the total number of long-term anchored vessels, including stored, abandoned and live-aboard, in Keys waters is approximately 600 to 700. About 300 are live-aboard vessels.

These numbers are based on previous live-aboard studies, pump-out data and field observation, said Celia Hitchins, senior administrator for the Marine Resources Division.