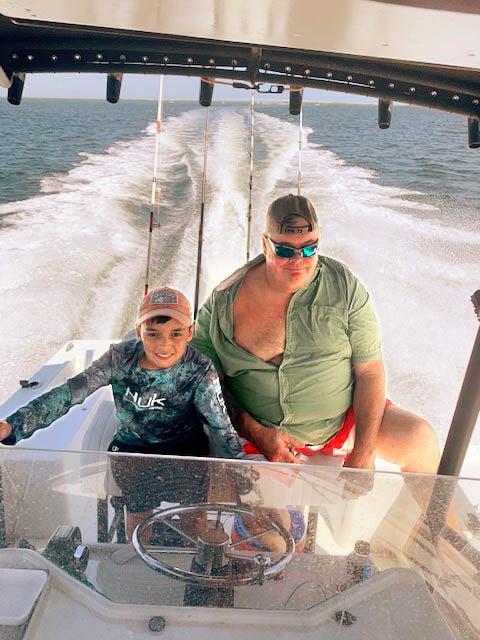 Avani Perez, left, pilots a boat with his grandfather, Jim Harris, during a recent outing. The 11-year-old, who is said to have ‘grown up on the water,’ helped guide, via GPS, U.S. Coast Guard and Florida Fish and Wildlife Conservation Commission crews, and a good Samaritan, to help rescue his family. 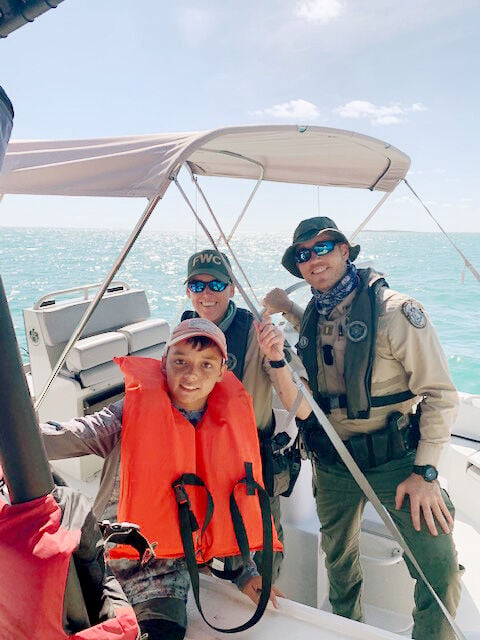 Avani Perez, 11, is seen aboard the Florida Fish and Wildlife Conservation Commission vessel after helping rescue crews find his grandparents, who had become separated from their vessel last week off Rodriguez Key.

Avani Perez, left, pilots a boat with his grandfather, Jim Harris, during a recent outing. The 11-year-old, who is said to have ‘grown up on the water,’ helped guide, via GPS, U.S. Coast Guard and Florida Fish and Wildlife Conservation Commission crews, and a good Samaritan, to help rescue his family.

Avani Perez, 11, is seen aboard the Florida Fish and Wildlife Conservation Commission vessel after helping rescue crews find his grandparents, who had become separated from their vessel last week off Rodriguez Key.

The wind was blowing at about 15 knots, catching the top of Jim and Kim Harris’ 21-foot Mako boat, giving it sailboat-type of effect as Kim tossed the anchor into the water.

But the gusting wind caused the anchor rope to be ripped from her hands, and she yelled back to her husband to back up the boat, although Jim did not realize she had thrown in the anchor — or that it was beneath the boat when he kicked it into reverse.

The rope became entangled in the propeller and stalled the motor. It all happened so fast, in about a minute and a half, they recalled in an interview with The Key West Citizen.

The Harrises had planned to go for a swim on Thursday, Oct. 8, with their 11-year-old grandson, Avani Perez, when things went terribly wrong off Rodriguez Key, about a mile offshore from Mile Marker 99, oceanside.

Jim thought at first it was a mechanical issue, as the boat would not shift into neutral when he attempted to restart. When he went to the stern, he saw the the anchor line had coiled around their propeller. Because they were suddenly stern anchored, it spun the boat into the gusting weather. Jim’s main concern was the boat could start taking on water in the two- to three-foot seas.

Jim says he did not consider calling for help, because it would have taken too long to arrive. “I jumped in the water and assessed it; it probably had half a dozen wraps around it [the propeller] that were pretty tight,” Jim said.

While Jim tried to cut the anchor line, the wind picked up and carried him about 15-20 yards from the boat.

“I saw him there, not realizing he’s not going to be able to swim back, and all of a sudden he says to me, ‘Kim, I’m not going to be able to get back to the boat, you better throw me something,’ “ Kim recalled. She looked around the boat, but passed on tossing Jim a personal flotation device. Instead, she put together three pool noodles and jumped into the water to rescue him.

“I was thinking I need to get to him. I knew he wasn’t drowning at that moment, but I knew he can’t swim or float forever,” she said. “I didn’t want him to get so far away that I couldn’t get to him with something to help him,” Kim said.

She made it to her husband, who grabbed a noodle, and together they turned and began swimming toward the boat, which by now was even farther away.

By this time, Avani yelled to see if he should call the U.S. Coast Guard. Jim told his grandson to call 911.

“At first, when they both jumped in the water, I was a little worried, but I called the cops and I knew they were on their way, so I wasn’t scared or anything,” Avani said.

Jim said they could see Avani on the phone as they continued to helplessly drift farther into the ocean.

Jim had no doubt Avani could communicate their coordinates, as the boy has been on and around boats since he was 2-years old.

Avant knew what to do, Jim said, and he remained calmed as he spoke with the 911 communications specialist with the Monroe County Sheriff’s Office.

Kim, however, said she was worried about Avani being scared, while also being afraid she and her husband would drift and end up in a different country. She added she was praying a lot, “Please, Lord, take care of me, give Avani the guidance, please make a boat come by, that’s what is going through my mind.”

The pair kept treading water, trying to keep in sight of the boat, as Jim reassured his wife they would be OK.

Avani, who is in the sixth grade and likes football, kept updating the 911 operator on their coordinates, using football yards to say how far away his grandparents were from him in the water.

Avant said he wasn’t really scared about the situation because the 911 operator, 29-year Sheriff’s Office veteran Amanda Colemen, kept telling him help was on the way. Coleman reported remained calm and followed all safety procedures.

Rescue boats began closing in as the two grandparents had been in the water for precisely an hour and their thought when they saw help arriving was, “Thank God!”

As rescue boats from the Florida Fish and Wildlife Conservation Commission and U.S. Coast Guard closed in on the couple, Jim hoisted one of their florescent pool noodles to guide them. After the hour-long ordeal, the couple was rescued from the water by a commercial fisherman, and the FWC soon afterward reunited the three.

Avani was invited to Coast Guard Station Islamorada on Friday in order to commend him for his actions during the ordeal.

“The Sheriff’s Office, FWC and U.S. Coast Guard all worked as a team and saved lives,” said FWC Capt. David Dipre. “The outcome was outstanding, because of the outstanding partnerships, excellent communication and strong desire to help others.”