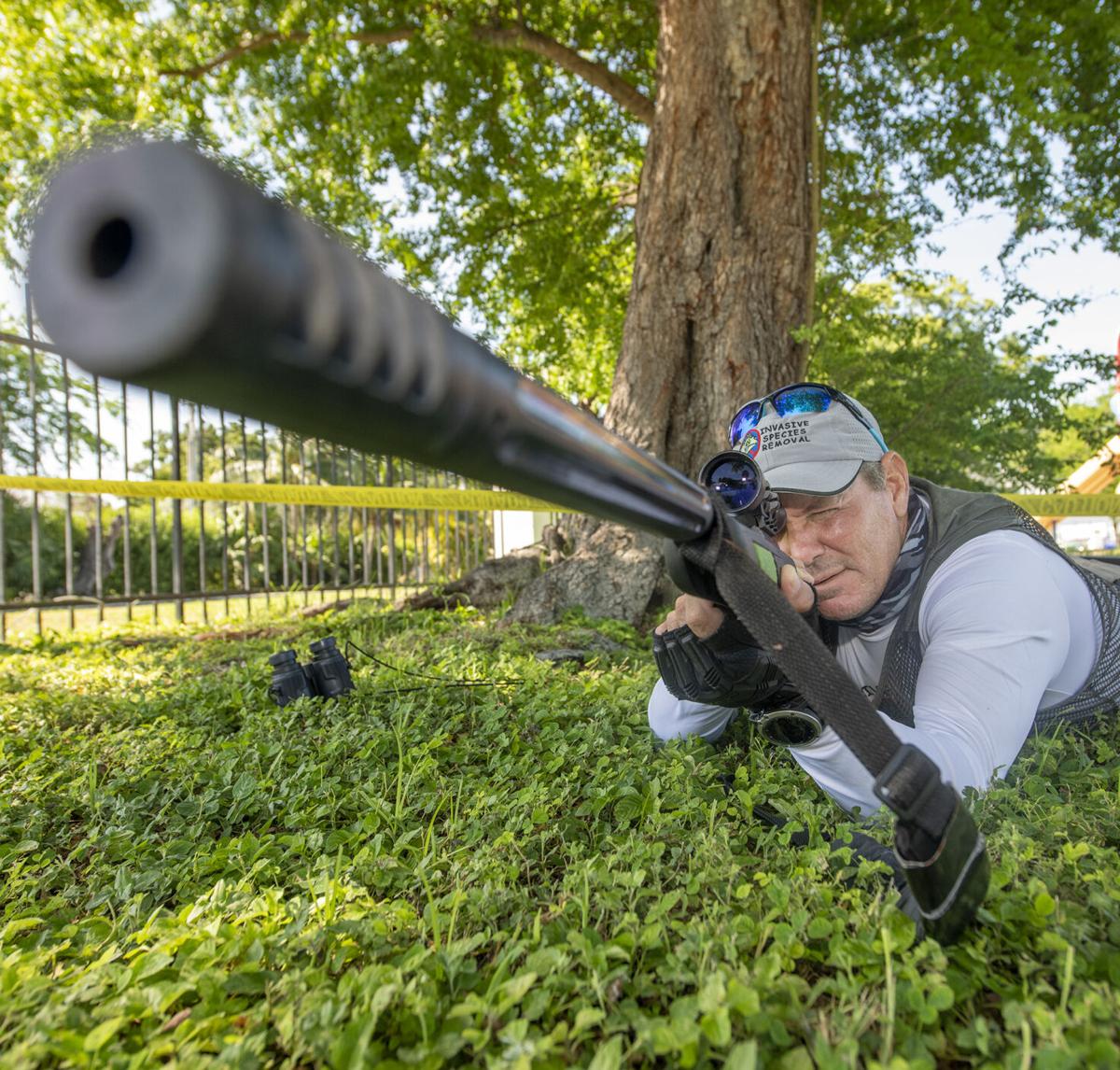 Quentin Garcia owns and operates Invasive Species Removal and specializes in controlling the exploding population of iguanas throughout the Keys. 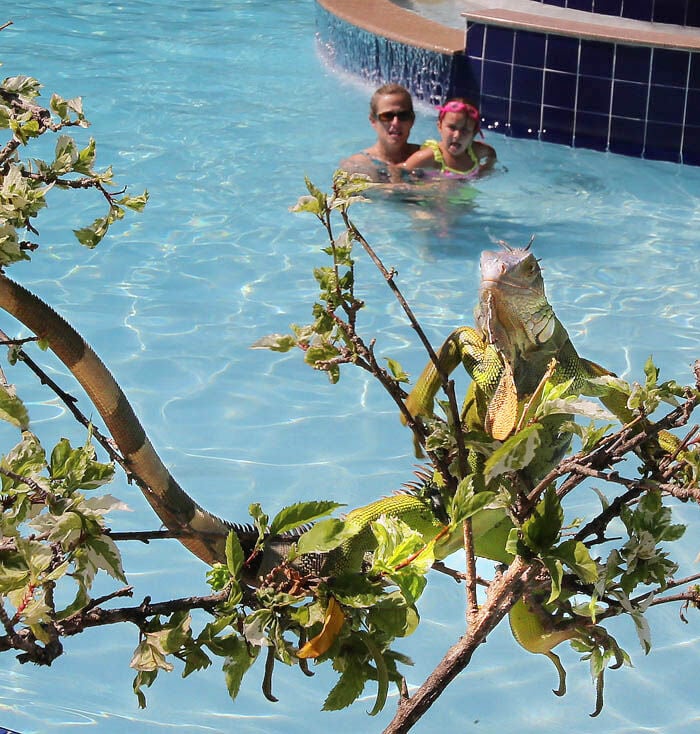 Over the past decade, the iguana population throughout the Keys has grown exponentially and with no natural predators, the invasive lizards are thriving. 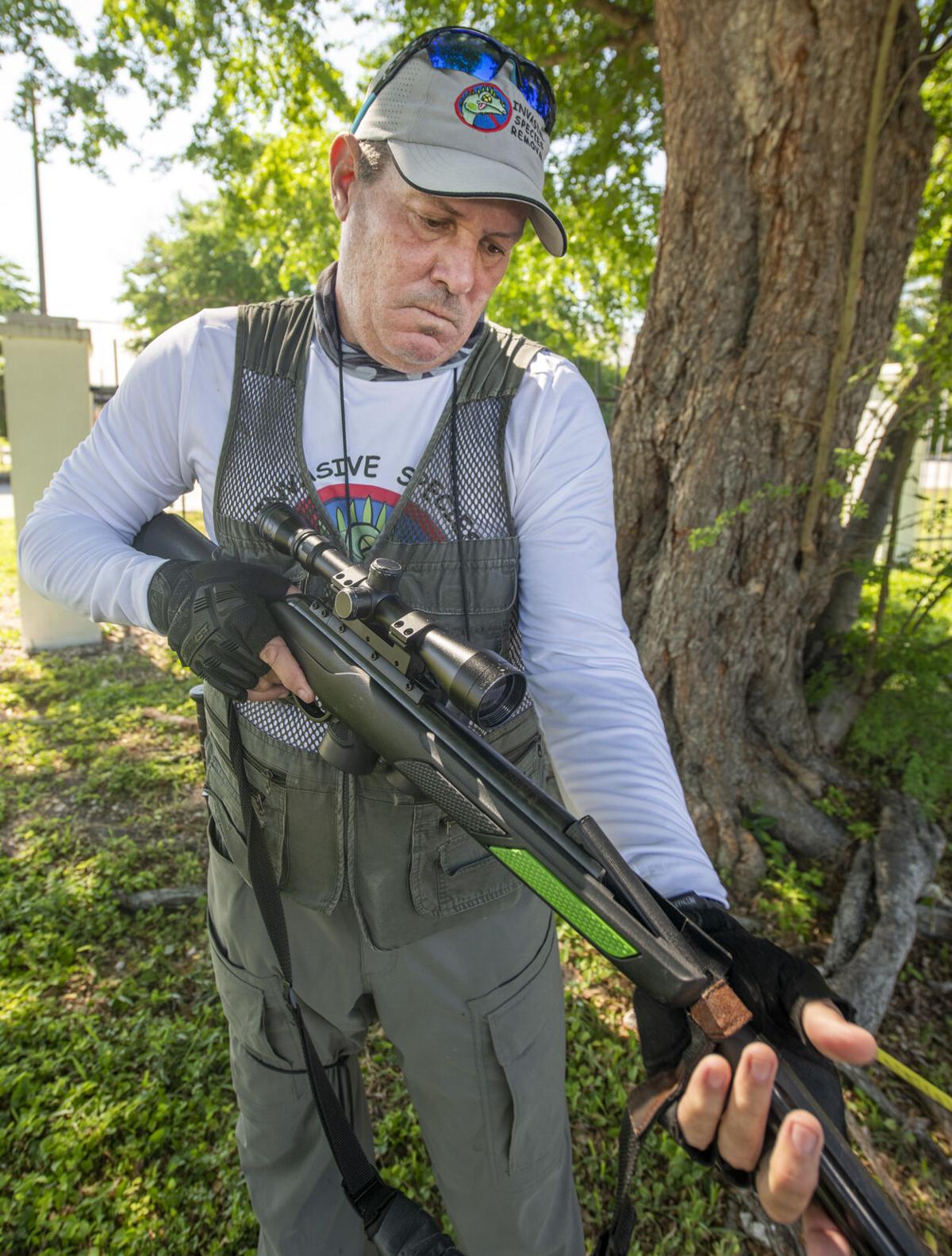 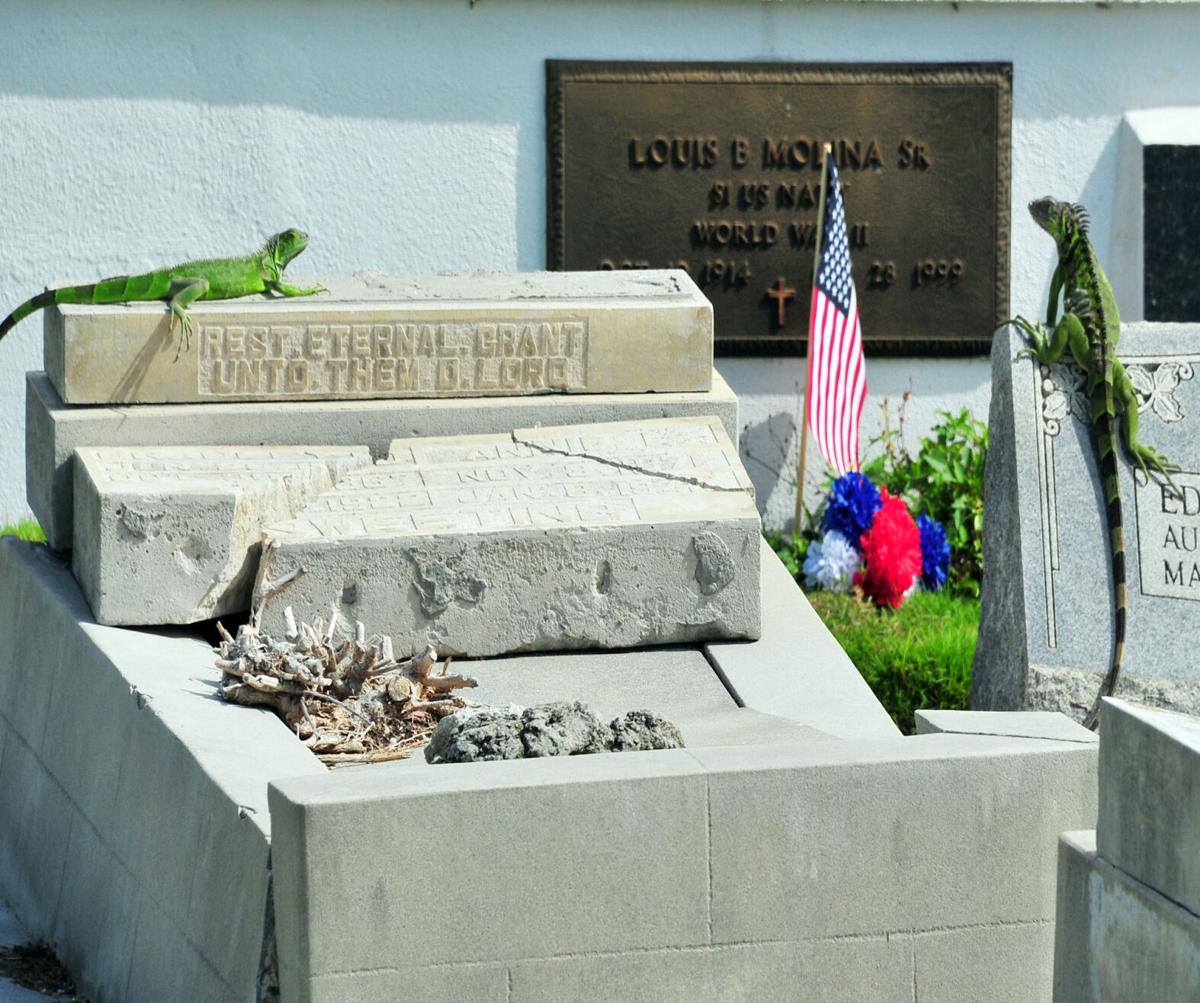 The Key West Cemetery is notoriously overrun by iguanas which burrow below and soil grave sites. 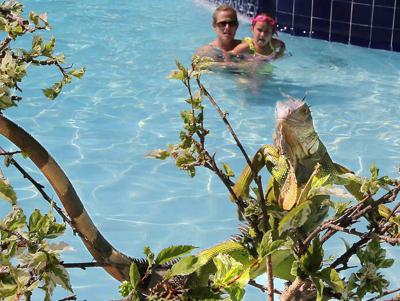 Quentin Garcia owns and operates Invasive Species Removal and specializes in controlling the exploding population of iguanas throughout the Keys.

Over the past decade, the iguana population throughout the Keys has grown exponentially and with no natural predators, the invasive lizards are thriving.

The Key West Cemetery is notoriously overrun by iguanas which burrow below and soil grave sites.

From Key Largo to Key West, iguanas have been a growing problem.

They are often referred to as the common, or green, iguana and have been deemed an invasive species that can cause erosion and property damage by digging, according to the Florida and Wildlife Conservation Commission.

And according to one local hunter of iguanas, Quentin Garcia from Invasive Species Removal in Key West, they have a bad habit of defecating in residential pools and tearing through expensive residential shrubbery.

“It’s amazing how much damage these things can do,” Garcia said. “When you get a good-sized lizard working through your garden, they can make it look like twigs in one visit.

It is not a small problem, either.

The FWC notes iguanas can grow to be over 5 feet long, and one of their officers, Robert Dube, said he believes they are only increasing in population throughout the Keys.

According to Dube, the Keys are the perfect habitat for the population to grow, with all the mangroves, and the FWC is looking into ways of combating the rising numbers.

The FWC does not get involved in the killing or removal of nuisance iguanas, Dube said, but if someone has an iguana issue, he encourages them to call a professional service — or they can take measures into their own hands, provided it is on their own private property.

Iguanas can be caught with snares or by trapping them, or by using a BB or pellet gun.

Garcia said, from the time he can remember, he always had a rifle or fishing pole in his hands, but professionally he found himself installing awnings and working as a bar manager, until one day something happened.

Garcia said, to that point, he had a live-and-let-live relationship with the iguanas, but seeing his demolished sweet potato plant “was the last straw.”

His friend who happened to be visiting was trying out a new pellet gun in the backyard of Garcia’s property by a canal and felt like he had enough.

“Let me borrow that for a minute,” Garcia said, and he proceeded by clearing out his entire property of iguanas.

Garcia’s partner later asked him if he thought other people would pay for a service like that, which started Garcia thinking ... and it was not too long after that, Invasive Species Removal went into business.

Customers contracted with Invasive Species Removal at a rate of $100 a month for residential properties and a bit more for commercial areas for his help in hunting down and removing these unwanted visitors.

“It’s just like having a pool guy,” Garcia said with a slight chuckle.

Garcia said they are not using bait, traps or repellents, but that they are hunting, killing and removing the iguanas from infested areas.

Garcia estimates in his two years of being in business that he has personally killed roughly about 3,000 iguana. After the kill, Garcia saves the local crab fishermen a nickel, by donating the bodies of the iguanas to use as bait.

If he had to guess, Garcia says, there are probably hundreds of thousands iguanas in the Florida Keys.

“The population of iguanas is much greater than the human population,” Garcia said.

He has studied their patterns and tendencies and said iguanas are creatures of habit that often return to the same spot day after day.

The iguanas tend to move around a lot between 11 a.m. and 3 p.m., settle down before sunset, move around for another hour and then settle in for the night.

He adds that iguanas are adaptable, tenacious and solitary reptiles that only really get together during mating season.

They are smart too, Garcia adds emphatically — smart enough to recognize people, even Garcia.

“When I show up and there is a lizard around, the lizard is going to do one of two things, it’s either going to run away as fast as it can or it’s going to freeze up completely,” Garcia said.

While hunting them, their droppings are the biggest clue as to where they might be hiding. Garcia said the key to hunting them is looking upward, as iguanas usually hang out on branches, on top of palm trees and on rooftops.

Once Garcia locates an iguana, he looks into his scope, aims for their ear area and ever-so-gently squeezes the trigger of his high-powered Gamo air rifle.

He said if he can hit that area it will bring them down immediately. He tries to kill them with one shot, but if not, one shot is generally enough to get them out of the tree where he can finish them off quickly.

Iguanas do tend to try to run away if they are wounded or startled by his initial shot, but there have been a number of other times too, when they have turned on Garcia and come straight at him with their claws and teeth.

“It’s an amazing thing to see, they literally lift on their back legs and use their tail as a balancing point. They are standing up and running and their front paws aren’t anywhere near the ground, I’ve had to get a hand on them, get a hand behind their head, whip out the old knife and do what has to be done,” Garcia said.

Dr. Doug Mader, a veterinarian in Marathon, said the most humane way homeowners could get rid of iguanas is to “gas them down,” with carbon dioxide because they breathe it and they do not wake up.

Mader adds, however, that unfortunately, most people do not have access to carbon dioxide.

He said what most people end up doing instead is putting the iguanas in their bait freezer thinking it is cold-blooded, so it will not hurt them.

However, Mader says that is incorrect because what happens is ice crystals form in their veins and brains before they die and research has shown that is extremely painful. He adds that method is forbidden and it is considered to be inhumane.

Iguanas are not protected in Florida, according to the FWC. They can be humanely captured and euthanized on private property at any time with landowner permission without the need for a permit or a license. Any inhumane treatment of iguanas is punishable by law.

Dube reminds homeowners who wish to hunt for iguanas on their private property that discharging a firearm in Monroe County is illegal.

For information about iguanas and the rules and regulations, visit the FWC website at https://myfwc.com/wildlifehabitats/profiles/reptiles/green-iguana/