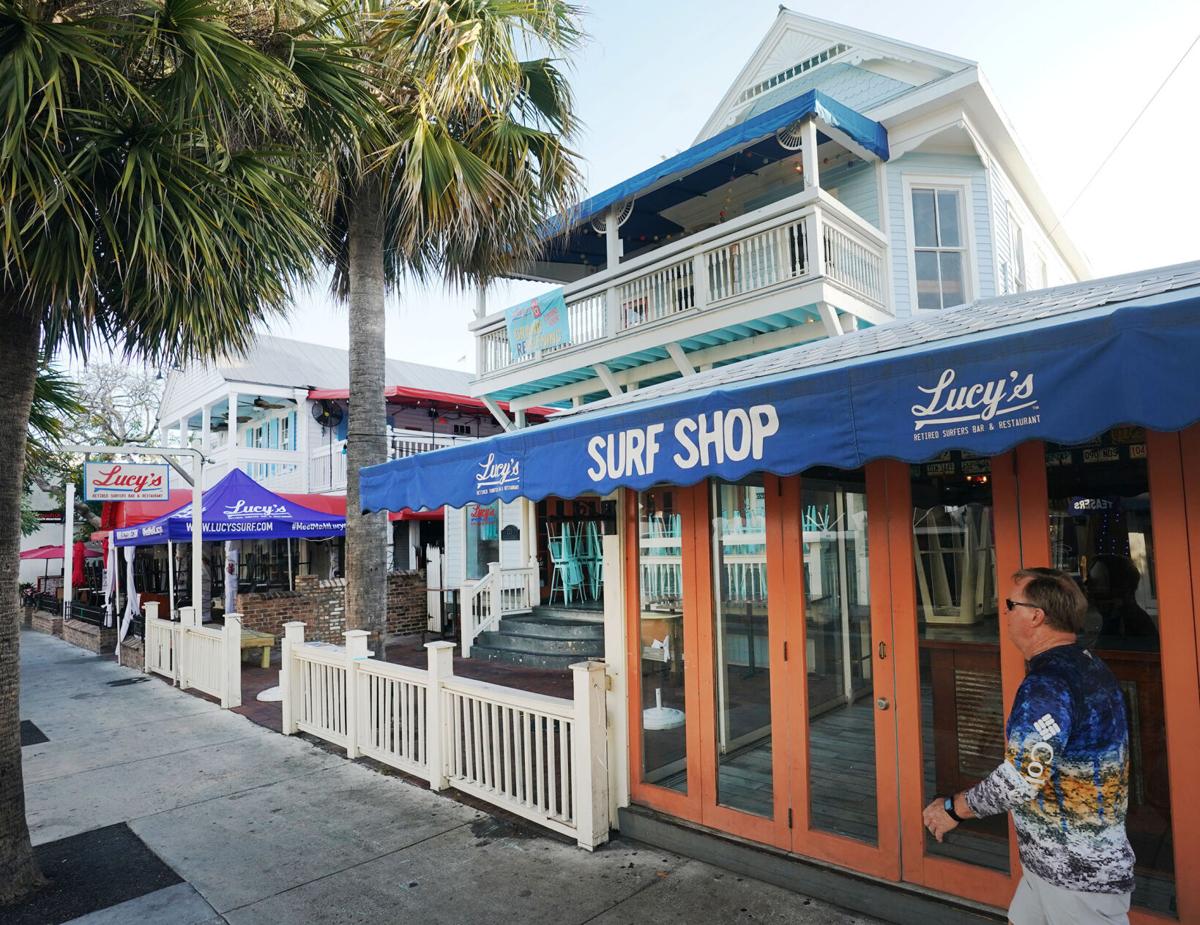 Lucy’s Retired Surfer Bar and Surf Shop, located at 221 Duval St., closed during the coronavirus pandemic but has since reopened. 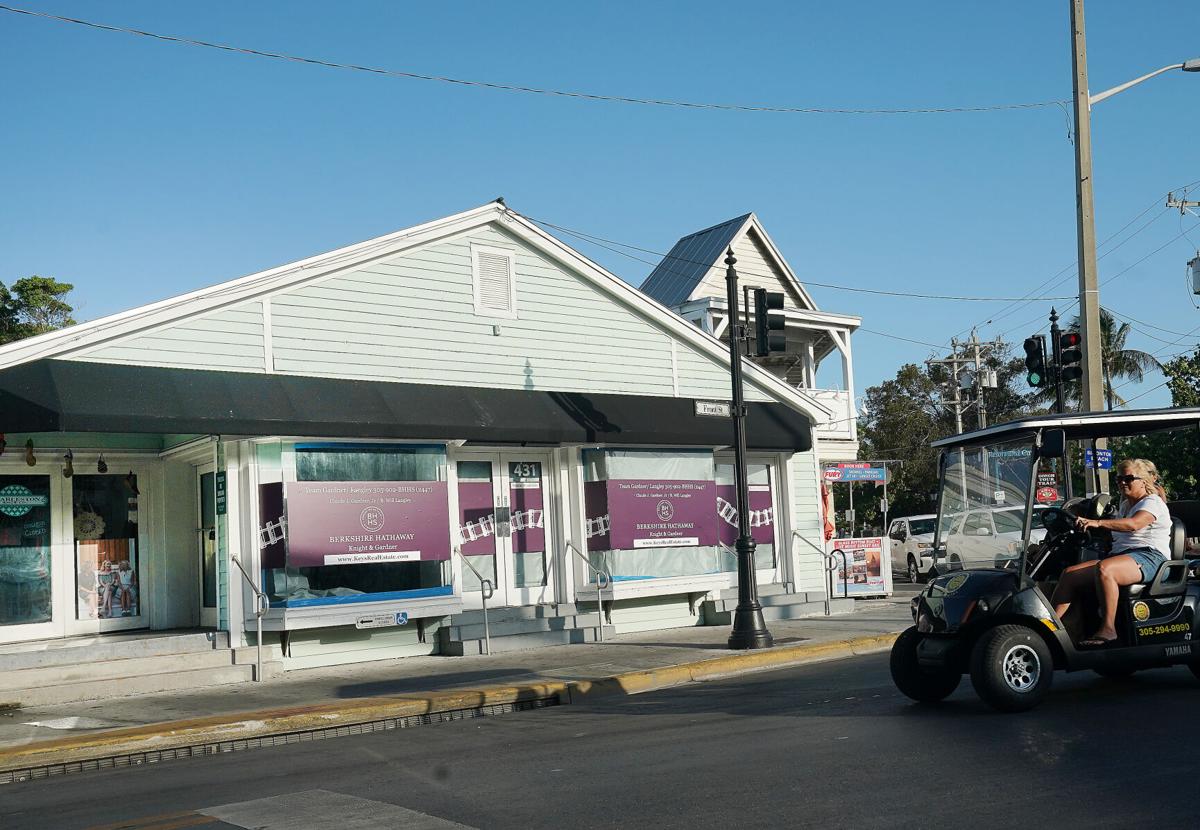 The former Starbucks coffee shop at 431 Front St. is among several available properties for lease in Old Town. 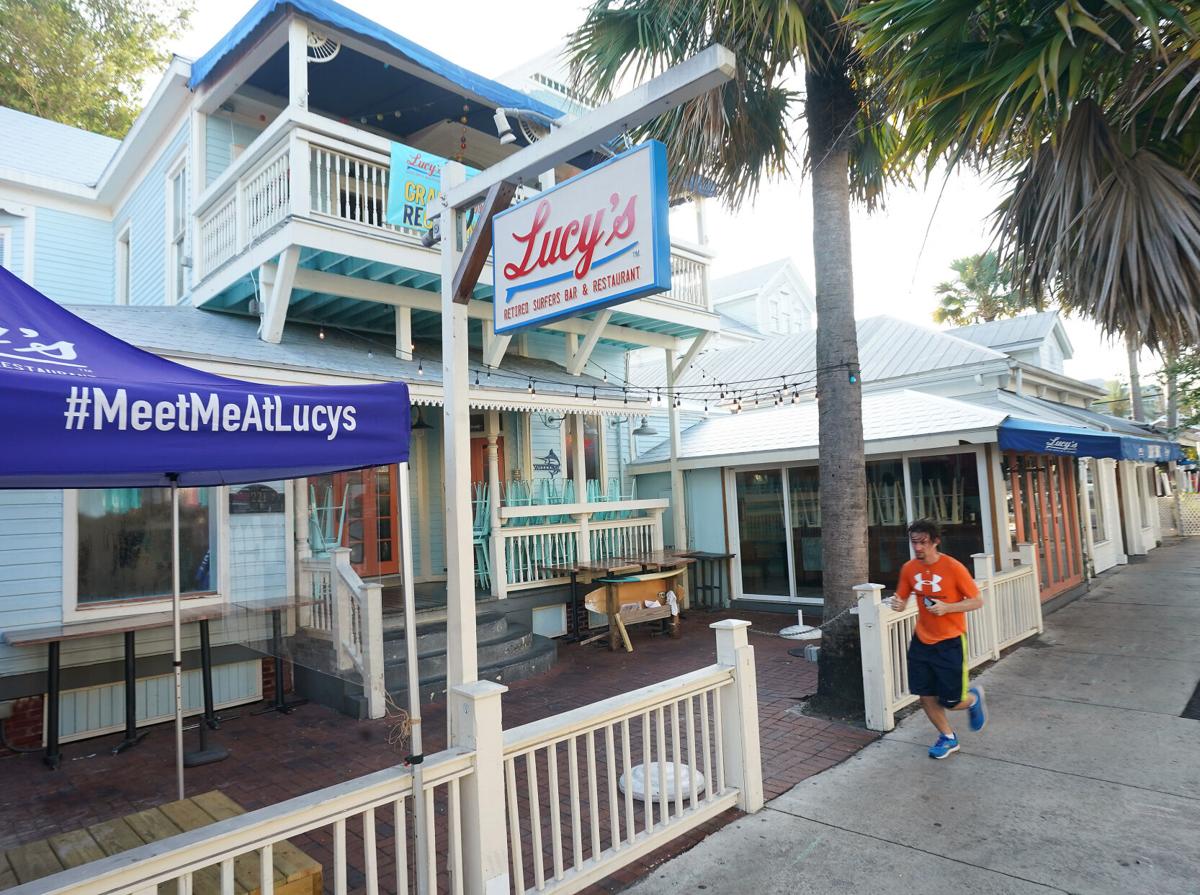 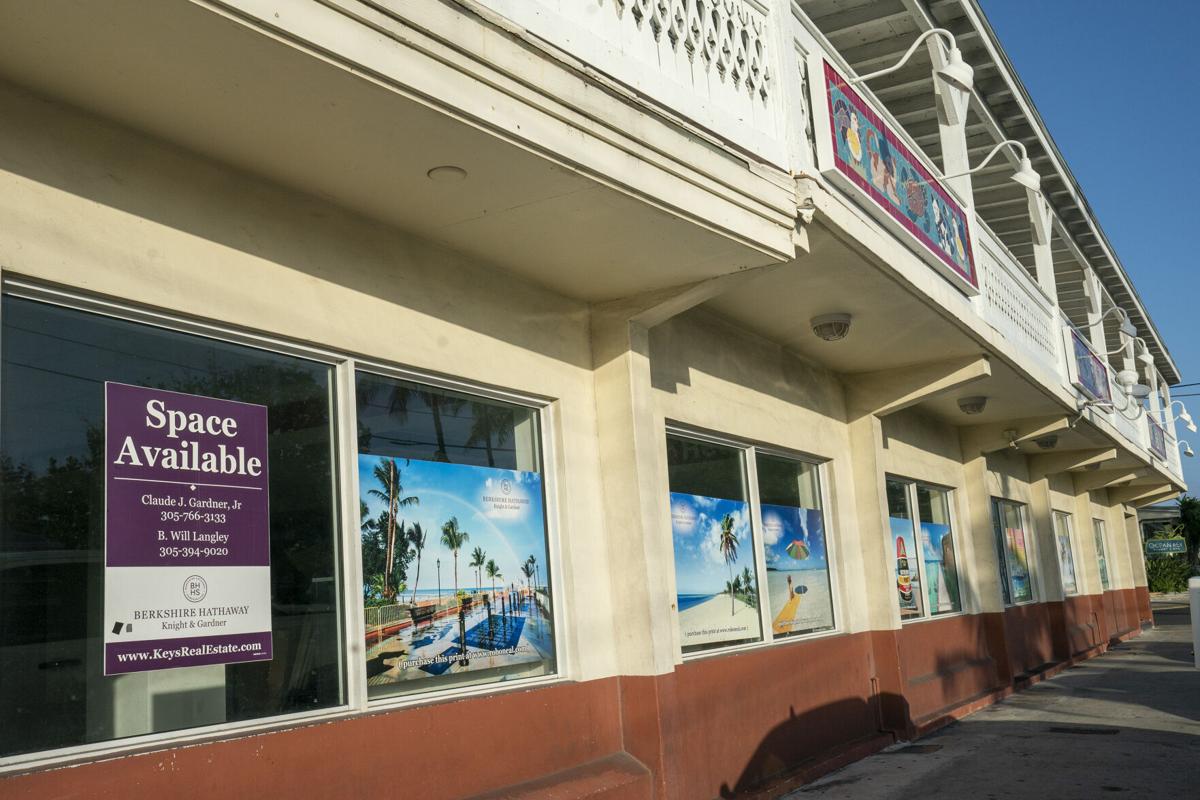 The former Quay Restaurant at the corner of Duval and Front Streets housed a two-story CVS drugstore for several years, but now remains vacant. 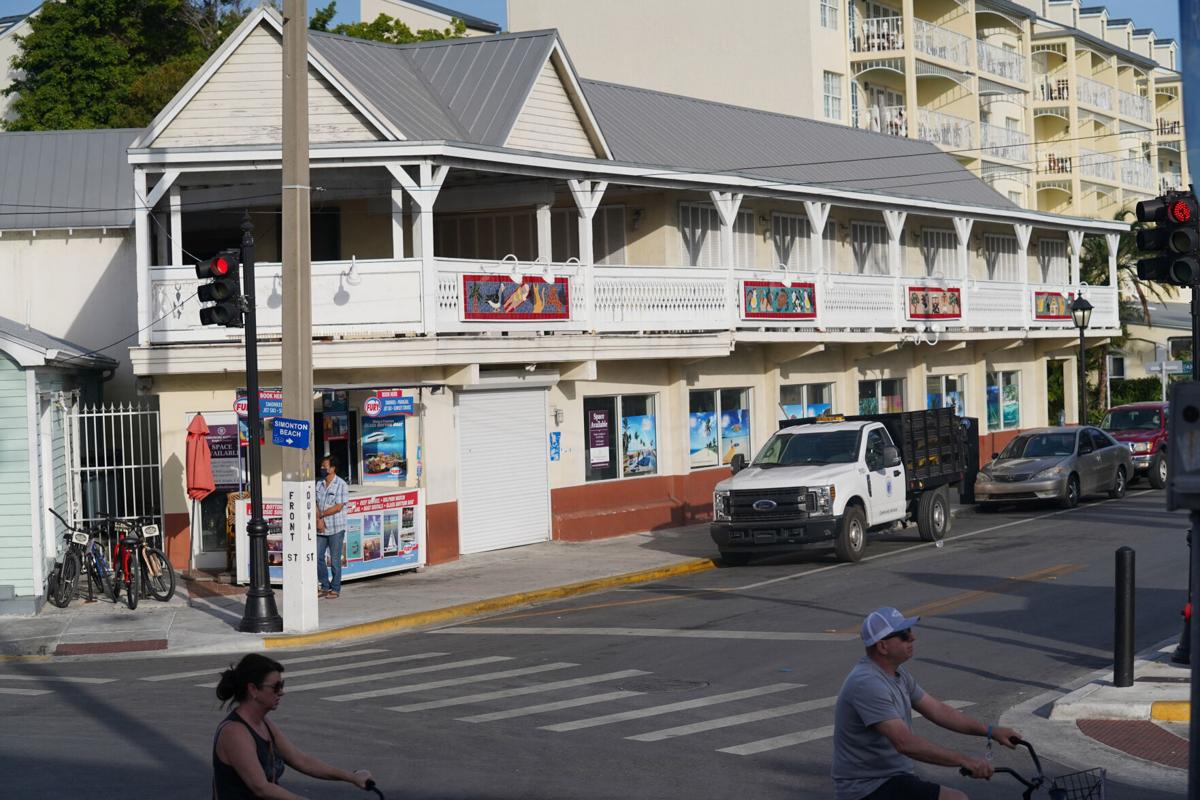 The former CVS at the corner of Front and Duval streets is a two-story property available for lease. 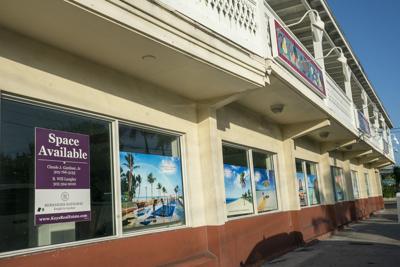 Lucy’s Retired Surfer Bar and Surf Shop, located at 221 Duval St., closed during the coronavirus pandemic but has since reopened.

The former Starbucks coffee shop at 431 Front St. is among several available properties for lease in Old Town.

The former Quay Restaurant at the corner of Duval and Front Streets housed a two-story CVS drugstore for several years, but now remains vacant.

The former CVS at the corner of Front and Duval streets is a two-story property available for lease.

With all the rejoicing over the better-than-average economic recovery in Key West this past fall and winter thanks to a glut of tourists, it has been a more cautious story in the retail sector.

Almost immediately when the Florida Keys shut down to visitors last spring, dozens of Key West retail storefronts closed. Some had already been having trouble selling enough product to meet the sky-high rents along Duval Street. Others looked at the uncertainty surrounding the coronavirus and chose to cut bait.

“We had more vacant spaces than we ever had,” said Will Langley, principal broker at Berkshire Hathaway Knight & Gardner Realty. “For a period of time [in 2020], I think the only company making money was our sign painting company because we were printing more ‘space available’ signs.”

That retail depression lasted through last summer and fall, despite tourists packing Key West because it was an easy drive from the mainland and the airport was open. While hotels, bars, restaurants and residential property sales were seeing seasonal sales numbers equaling or better than 2019 — which was a banner year in Key West in those categories — retail stores stayed mired in a slump.

But things began turning in January, according to some commercial real estate brokers. Empty storefronts began leasing out. New business owners began looking for retail space. A few businesses that had closed last summer started to reopen, like Lucy’s Retired Surfers Bar & Restaurant, 221 Duval St., which opened its doors recently in the same space it had vacated when the pandemic hit.

“That was a great sign for other people,” Langley said about Lucy’s reemergence. “They knew Duval Street. They had occupied Duval Street. And they decided to come back.”

While he wouldn’t give specific numbers, Langley said his company has rented out approximately half of the empty storefronts he had available in January. Two new St. Thomas-based jewelry stores are moving into the former Diamonds International and Little Switzerland jewelry store locations. A new restaurant, Stinkin’ Crawfish Key West, has opened on Duval next to Lucy’s. A new restaurant from a Tennessee company is slated for the former Red Fish Blue Fish restaurant, 407 Front St.

But the interest in leasing space on Duval Street only came after many landlords lowered monthly rent rates, Langley said. Rent levels along Lower Duval and Front streets had traditionally been sky-high because of their proximity to where cruise ships moored. One of those locations was the former Starbucks at 431 Front St., which closed soon after the pandemic hit. Langley said that once the landlord lowered the rent, “we had multiple offers on the space that week.”

“Landlords have had to get more aggressive on their pricing,” he said. “It was basic supply and demand. We had a lot of vacant spaces. That is clearing up now.”

Some of the increased interest in retail startups is coming from snowbirds and other vacationers who chose to ride out the pandemic in Key West, extending their stays and creating a boom market for vacation home rentals. With a lengthy taste of paradise, some have decided to stay and open their own businesses here, says Sandra Swan, a business broker for KW Commercial, the commercial sales arm of Keller Williams Key West Compass Realty. Swan focuses on selling established commercial businesses and said her phone won’t stop ringing.

“A lot of interest in Key West. A lot of random calls of people saying, ‘what’s for sale,’” Swan said about the queries she is receiving. “People are looking to change careers and work remotely. There’s a lot of that right now.”

Many of her clients are interested in opening or taking over moped rental businesses or bike shops, Swan added.

“People want to do the things they did down here on vacation that are fun. I’ve had people call and say do you have any pool cleaning companies for sale,” she said, adding that despite cold-calling pool service firms to see if they were interested in selling, none were.

Amanda Brady, the city’s Chief Licensing Official, said applications for new businesses began ticking up in January. In 2019, there were 1,011 new business license applications submitted to the city. In 2020, that fell to 773. So far this year, there have been 242 applications, she said.

“We take in about 80 to 100 new applications a month. In the last three months, it’s pretty much on par with our usual year,” Brady said, adding that retail and non-transient property rental licenses top the list.

Wherever the interest in retail is coming from, it bodes well for Key West, said Mom & Pops’ Menta, who also owns Key West First Legal Rum Distillery, 105 Simonton St. He said retail shopping in Key West is moving off Duval Street, where it has traditionally been centered. New retail business owners are looking for affordable rents and finding them in off-the-beaten-path locations.

“Side streets, Simonton, Whitehead, even further back on White Street. I’m watching things pop up in these odd spots, which I think is really good; small startups, not these big things,” Menta said. “They’re venturing out more around the entire island. Simonton and these side streets are becoming the new Duval because [business owners] can get better rates.”