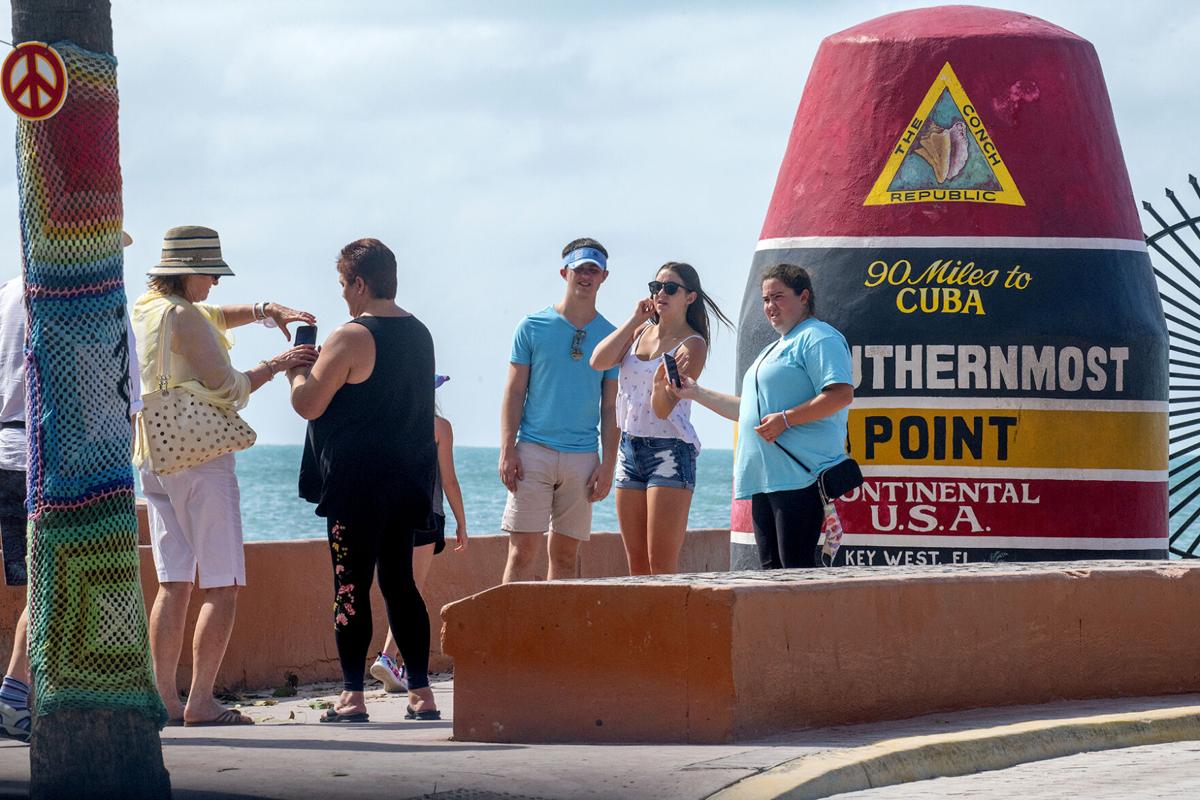 Visitors to the Southernmost Point buoy pass cellphones among one another for souvenir photos. 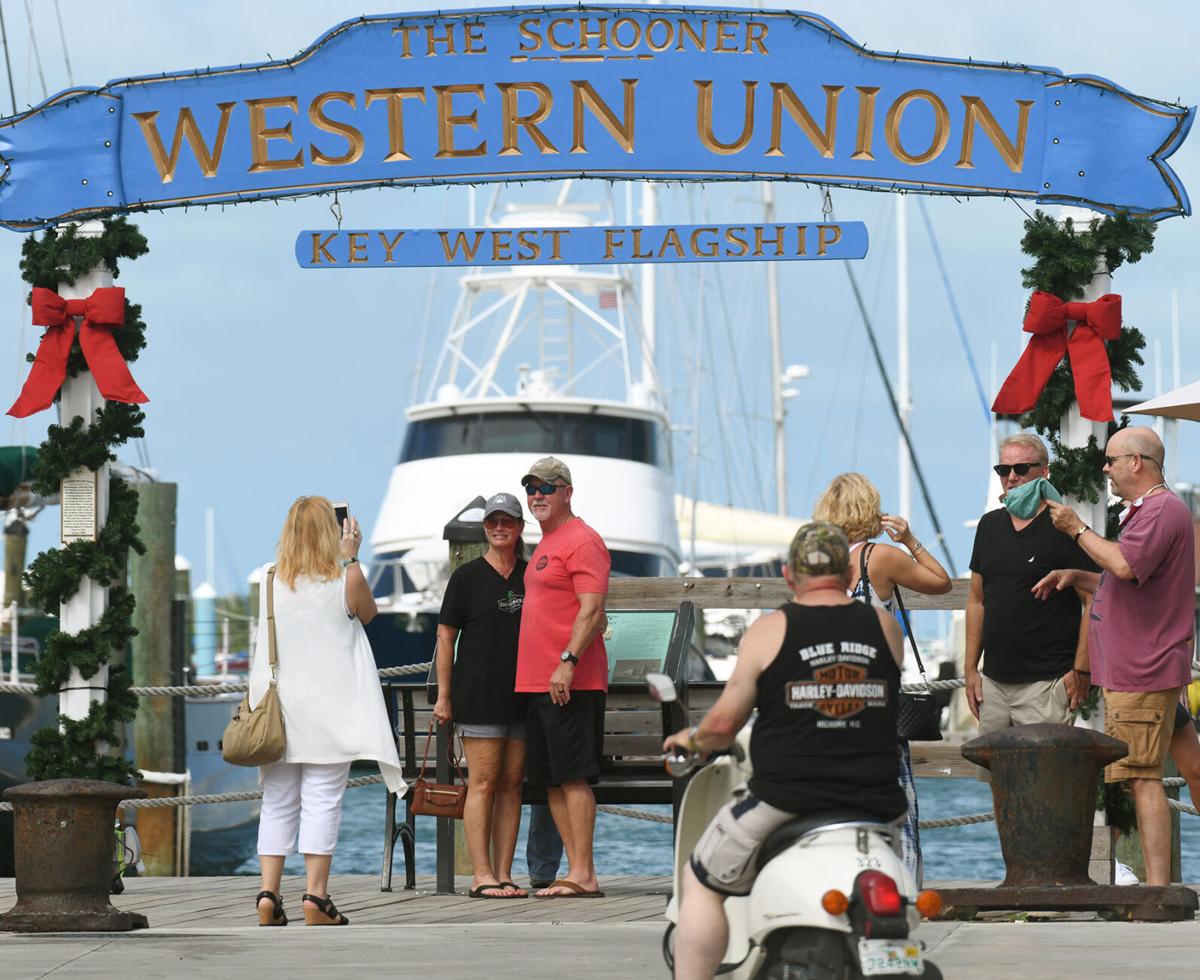 The Key West City Commission voted Thursday to require facial coverings for everyone in public. 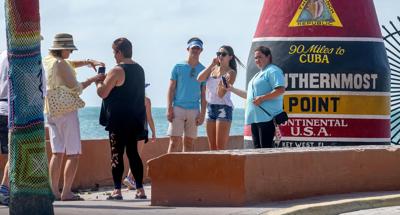 Visitors to the Southernmost Point buoy pass cellphones among one another for souvenir photos.

The Key West City Commission voted Thursday to require facial coverings for everyone in public.

Key West is now under a city-wide mask requirement order.

Commissioners voted unanimously at a special meeting Thursday to revert back to their original mask order, which requires anyone in public to wear a mask even if they can social distance. There are 11 exceptions to the order, including when in a private car or boat, but masks must now be worn by both residents and visitors no matter where they are in the city.

Commissioners had earlier in the week discussed creating mask “zones,” five heavily-trafficked areas popular with tourists where masks would be required. However, City Attorney Shawn Smith said that a “patchwork” effort of enforcement would lead to inconsistency and confusion for police and code officers. As a result, a mask order is now in place for the entire city.

“If you are outside and do not fit one of the exceptions, you are required to wear a mask,” explained City Manager Greg Veliz. “It’s a ratcheting up of what we currently have in effect.”

“This is a bad idea. You are squandering political capital and leadership on something that will have no effect,” argued local restaurant owner Joe Walsh. “It will have a negative effect by undermining your authority.”

Several other speakers appeared at the special meeting, both in favor and against the new ordinance. Resident Tom Malone said that while many local business owners are complying with mask and other safety ordinances, the same few are not. He did not name the businesses he believes are repeat offenders; however, mask citations have been issued at most of the local restaurants owned by Walsh, including Fogarty’s, Jack Flat’s, the Waterfront Brewery and Caroline’s Cafe.

“It’s time to arrest offenders, whether it’s a bartender or a server. Arrest them on the job so people can see it,” Malone suggested, adding, “We need to get tough. We need to change our approach.”

City officials have tried different ways since the coronavirus pandemic hit in March to protect residents’ and visitors’ health while helping area business owners recover from the devastating COVID-19-related shutdown. With a vigorous business community speaking out loudly about the economic challenges they and their staff face, city commissioners have allowed changes over the summer that increased customer capacity and made exceptions for wedding planners, musicians and local sports leagues to avoid masks. However, walking that “fine line” has not benefited everyone, said Mayor Teri Johnston.

Commissioners were not in agreement on the new city-wide mask requirement but voted for it because there are few other ways to convince the weekend visitors who have been crowding Duval Street to wear masks, which myriad scientific studies including from the Centers For Disease Control have said protect both the person wearing the mask, as well as the people they come into contact with. And they pointed out it’s not just visitors who are contributing to the sky-high number of COVID-19 cases. Local events, such as the Key West High School football games, are often crowded with spectators. And, while spread out in the viewing stands, some are not wearing masks.

Commissioner Billy Wardlow said he was against forcing people to wear a mask in areas where there are few or no people around. Instead, he advocated for reducing the number of flights at the Key West International Airport to lower the number of visitors. Commissioner Greg Davila said he would have a hard time explaining to his constituents they have to wear a mask at all times while outdoors.

“I will have trouble explaining they have to wear a mask while dog walking. I understand that, but we need a complete reset,” he said.

Commissioner Sam Kaufman said he was not comfortable that Monroe County health officials had not been consulted about the new mask ordinance.

“Will this mask ordinance do it alone? I highly doubt it,” he said.

However, Mayor Johnston said she and other officials are in daily contact with government health officials as well as local medical providers. While their input is useful, it is up to the commission to set policy, she said.

Several commissioners also mentioned increasing enforcement and Veliz said he is working on ways to boost the number of police and code officers on the most heavily-trafficked streets. He will be using deputized fire department staff this weekend, as well as additional police officers.

“We’re going to have 10 to 15 officers on Duval at any given time this weekend,” Veliz said. “We will enforce any areas we are called to.”

While one speaker called the commission “mask gestapos,” other business owners were more supportive of the new mask order.

“We all have to adapt. You cannot go back to business as usual … elbow to elbow,” said Mark Gambuzza, owner of Uva Wine Shoppe, 519 Fleming St. “Better to make some money than no money.”

The rate of COVID-19 “positivity,” the percentage of people testing who test positive for the virus, recently hit a high of 18% in Monroe County, a cause of concern to city officials. However, that rate can change daily depending on the number of people getting tested. Still, New York City just ordered the closure of its schools because its positivity rate rose to 3%. On Wednesday, there were 30 new cases reported in Key West for a total of 1,412, with seven hospitalized in the Lower Keys Medical Center.