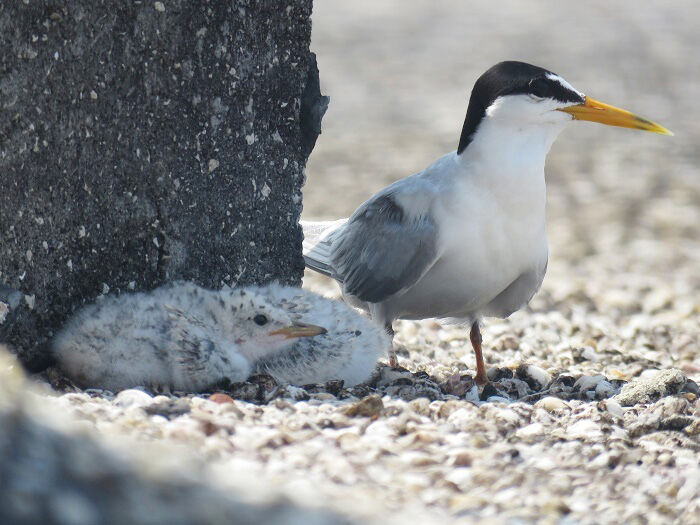 A least tern mother stands watch over her chicks on a roof. 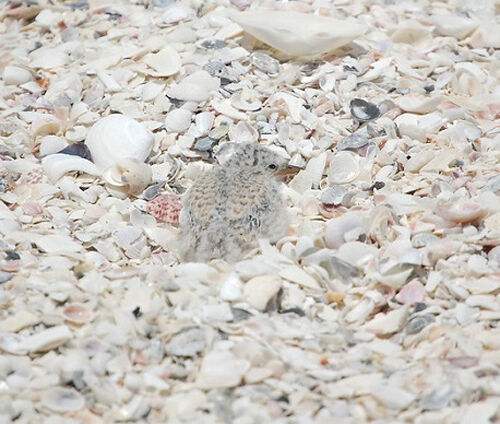 Least tern chicks rely on camouflage to protect them from predators.

A least tern mother stands watch over her chicks on a roof.

Least tern chicks rely on camouflage to protect them from predators.

With a penchant for condo living and a taste for small fish, least terns have taken up residence on most of the area’s large commercial gravel rooftops. From now until August is nesting season for the small seabird.

If available, the least tern prefers sandy beaches for nesting but are often limited to gravel rooftops while living on a chain of limestone islands. Sea-level rise, beach erosion, coastal development and human conflict throughout Florida have left these birds with little recourse. Least terns, which the state considers to be a threatened species, are opportunistic nesters, with an estimated 80% of the population nesting on rooftops.

There was an average of 29 nesting pairs per monitored rooftop in 2018, half the number reported in 1993, according to Florida Shorebird Alliance.

Nest surveyors usually observe nests while standing on the ground looking up.

“You can determine by their behavior that they have active nests. They ‘helicopter’ or land in a certain area while feeding their young,” Zambrano said.

That’s what is considered as a flush count. A direct count is when observers visually sight the eggs.

“Rooftops represent important nesting habitat for these protected species,” said FWC public information officer Michelle Kerr. “Based on data entered into the Florida Shorebird Database to date and through communications with other observers, Monroe County has approximately 40 historic least tern nesting rooftop sites; 20 of them are considered active.”

Active nesting sites in the Upper Keys include Amara Cay, Futura Yacht Club, Buttonwood Bay, Rock Harbor, a huge colony at Key Largo’s Bank of America and the adjacent building behind it, Tradewinds Plaza and Garden Cove Divers, according to FWC’s database.

“The number of rooftops suitable for nesting has declined over the years, so the number of least terns nesting on roofs has gone down over time. Large buildings with flat roofs covered in gravel such as on strip malls, department stores, condominiums, and supermarkets are often used consistently by nesting least terns,” Kerr said.

But gravel and tar roofs are consistently being replaced.

“Sometimes emergency roof and HVAC repair and maintenance activities are necessary during the breeding season (March-August for rooftop nesting birds). Accessing the roof for this work can cause adults to flush (leave) from their eggs and chicks, leaving them vulnerable to predation, extreme heat and dehydration in the sun. Chicks may run off the roof edges or fall into open drains and gutters,” Kerr said.

FWC advises roofing contractors and building owners and managers to be diligent in looking for the camouflaged eggs and to not disturb nests.

Removing the eggs or fledglings of this imperiled bird is illegal in Florida.

“Minutes and sometimes even seconds away from eggs or baby birds puts them in jeopardy with soaring temperatures,” Zambrano said.

These birds dig shallow scrapes in gravel substrate on rooftops, leaving the eggs mostly exposed. It’s about three to four weeks from between egg and fledgling.

The FWC and other Florida Shorebird Alliance partners can help if roof access is needed. There is a permitting process. The options are to wait to conduct roof repairs until after nesting season or go through the permitting process.

In the 26 years that Zambrano has been with FWC, he had never encountered roofers removing eggs and fledglings and taking them to a wild bird rescue center as happened last year at Futura Yacht Club on Plantation Key when more than 100 eggs and 27 hatchlings were collected and moved. They all likely died, Zambrano said. Even returning them to their nesting roof would be insufficient to save them as each egg needs to be in its specific nest.

“I don’t know how they came to that decision. The Keys are hot. It’s summertime. Going up on a roof in the middle of the day is going to impact the eggs. When the parents fly off the egg, even if it’s for a few minutes, it’s dangerous,” Zambrano said. “In a sense, these buildings are a good thing for these birds. But as redevelopment continues we’ll have to see where they go.”