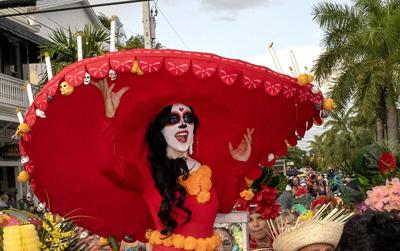 Despite Fantasy Fest 2020 being cancelled because the COVID-19 pandemic, Key West businesses and city officials are still preparing for revelers to show up.

Partiers are still planning on coming to Key West to celebrate the cancelled event for a variety of reasons, including some vacation home rentals and lodging establishments reportedly refusing to return deposits for the previously planned Oct. 16-25 Fantasy Fest week.

As a result, city officials have no choice but to increase security and public works staffing, according to Key West City Manager Greg Veliz, even though there will be no official Fantasy Fest zone for attendees and no nudity will be allowed.

While city employees will not be paid overtime to be on call, vacation and leave requests are being cancelled for police officers and public works employees during that time period in case they needed, Veliz said.

“You have to prepare for the most drastic circumstances: having a replay of what has historically been Fantasy Fest,” Veliz said. “I’m not afraid of it but, yes, I am concerned.”

“The city has cancelled Fantasy Fest. There seems to be an underground movement for people to come anyway,” agreed Monroe County Mayor Heather Carruthers.

In addition to not wanting to forfeit their room deposits, some visitors are simply looking forward to a vacation in the sun, albeit with costumes. Others are interested in the unsanctioned sexual opportunities that often abound at night.

Gov. Ron DeSantis’ order last Friday allowing bars and restaurants to resume operations at 100% capacity and eliminating penalties for not wearing a mask appears to be encouraging others to come down mid-October.

“[DeSantis] is also prohibiting local government to interfere with this ruling! So stick that in your hat mayor Terri and smoke it!!,” a person calling herself Barbara Reynold Uber posted on a Facebook page for, “Tampa Fantasy Team for Key West.”

The Tampa Team has been particularly active on social media recently, encouraging web page members to travel to Key West during the now-cancelled Fantasy Fest week. The administrator of the web page, Eric April, has for years been the unofficial organizer of the group. With 1,100 members on the social media site, many of them regularly attend Fantasy Fest, including entering a float in the main parade every year.

This year, April is organizing both private and public events each day and/or evening from Oct. 18 to Oct. 24, including a bike ride on the 18th entitled, “Black Lingerie Matters.” While that event may be attempting to replicate the annual Zombie Bike Ride, which draws thousands of riders, so far only 13 people indicated on the Tampa Team Facebook page that they were planning on attending.

April did not respond to a request from The Key West Citizen for comment. However, his wife, Sandi April, posted on the group’s Facebook page: “We understand COVID has changed a few things so all the events we listed are just to have fun, it’s not a formal event.”

“This all about having fun AND being safe. Please review the current COVID guidelines for KW and abide by them. Let’s do our part to slow the spread. Incorporate a fun mask into your costumes! Let’s not be a part of the problem,” Sandi April wrote in her post.

Nadeen Grossman-Orr, the official organizer of Fantasy Fest who made the difficult decision on July 10 to cancel this year’s event due to the coronavirus, emphasized that her group is not involved with the Tampa Team or any other groups coming to Key West for that time period.

Grossman-Orr has communicated with Eric April multiple times about the events he has planned, which revolve around nightly costumed parties at different local bars, including Fogerty’s and Captain Tony’s, Grossman-Orr said.

April is also planning a parade Friday, October 23, starting at the Key West Cemetery at 5:30 pm, the same time the annual “local’s parade” would usually kick off.

“I’ve been talking to him at length. He’s made some changes to some things,” Grossman-Orr said, declining to detail “things.” “He’s responsive and respectful.”

Grossman-Orr is particularly careful about not having the trademarked “Fantasy Fest” name associated with The Tampa Team or any others coming to Key West to celebrate what she called “an alternative lifestyle.”

“Fantasy Fest has been going on for 40 years. I don’t want the non-event [this year] to ruin the chances for the future of this much-loved event,” she said, adding, “Any kind of gathering, I am not condoning. I am discouraging large crowds.”

Some local businesses are eagerly looking forward to a much-needed boost in visitors while others are taking a wait-and-see approach to how they will handle any potential crowds. Daylin Starks, general manager of Irish Kevin’s, 211 Duval St., posted a welcome on the Tampa Team’s Facebook page.

However, she said she is not working with the group on any planned events and will follow any rules put in place by city officials. Irish Kevin’s usually throws an annual ’80s themed party during Fantasy Fest and while there is no formal event this year, she does expect crowds during the week. She said the bar/eatery will operate at 100% capacity but will have extra security in place to ensure the crowds “won’t pack in like in the past.”

“We’ll try our best,” she said about crowd control. “I think it will be challenging with all these people coming down.”

Mark Rossi, owner of the Rick’s Bar/Durty Harry’s entertainment complex, 202 Duval St., said he is waiting to see if COVID-19 case numbers continue to drop in the next three weeks to decide whether to impose capacity limits and/or mask requirements in his bars.

Currently, Rossi has no capacity restrictions but staff are required to wear a mask while working. He said he is concerned that if there is another coronavirus case spike, city officials could ask the state to again close local restaurants and bars.

“If we see the [COVID] rate going up, we certainly don’t want to be shut down. We’re not here to see people get sick,” he said.

Joe Walsh, who owns five restaurant/bars in Key West, including Fogerty’s, 227 Duval St., where the Tampa Team is planning on continue the restaurant’s annual “Red Party” on Oct. 21, said he has not formally worked with the Tampa group on the party.

However, Walsh is aware the group is coming and will impose limits on the size of parties allowed to sit together and require that every patron has a chair, he said.

“It will be a little less of a party than it has been historically,” Walsh said about the event, adding, “I would love to see people here. I don’t want to see people wall to wall on Duval Street. Having said that, we need to get back to work.”

Grossman-Orr herself is encouraging visitors to come to Key West during that week. The community and its workers need to get back to business, she said. However, instead of the usual drinking and carousing, try something else, she suggested.

“Try something new this year. Get out on the water. Learn our history. Rent a scooter,” she urged.

“You have to prepare for the most drastic circumstances: having a replay of what has historically been Fantasy Fest. I’m not afraid of it but, yes, I am concerned.”