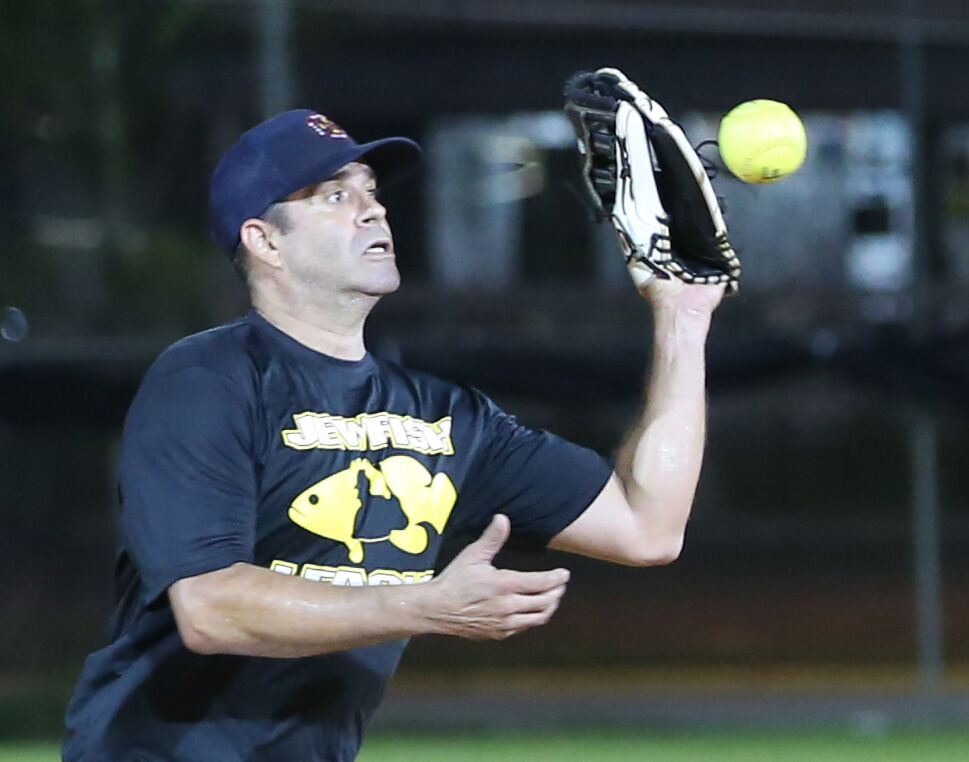 Shortstop Michael Balbuena had a little trouble getting the ball into his glove on Friday night at DeWitt Roberts Field. 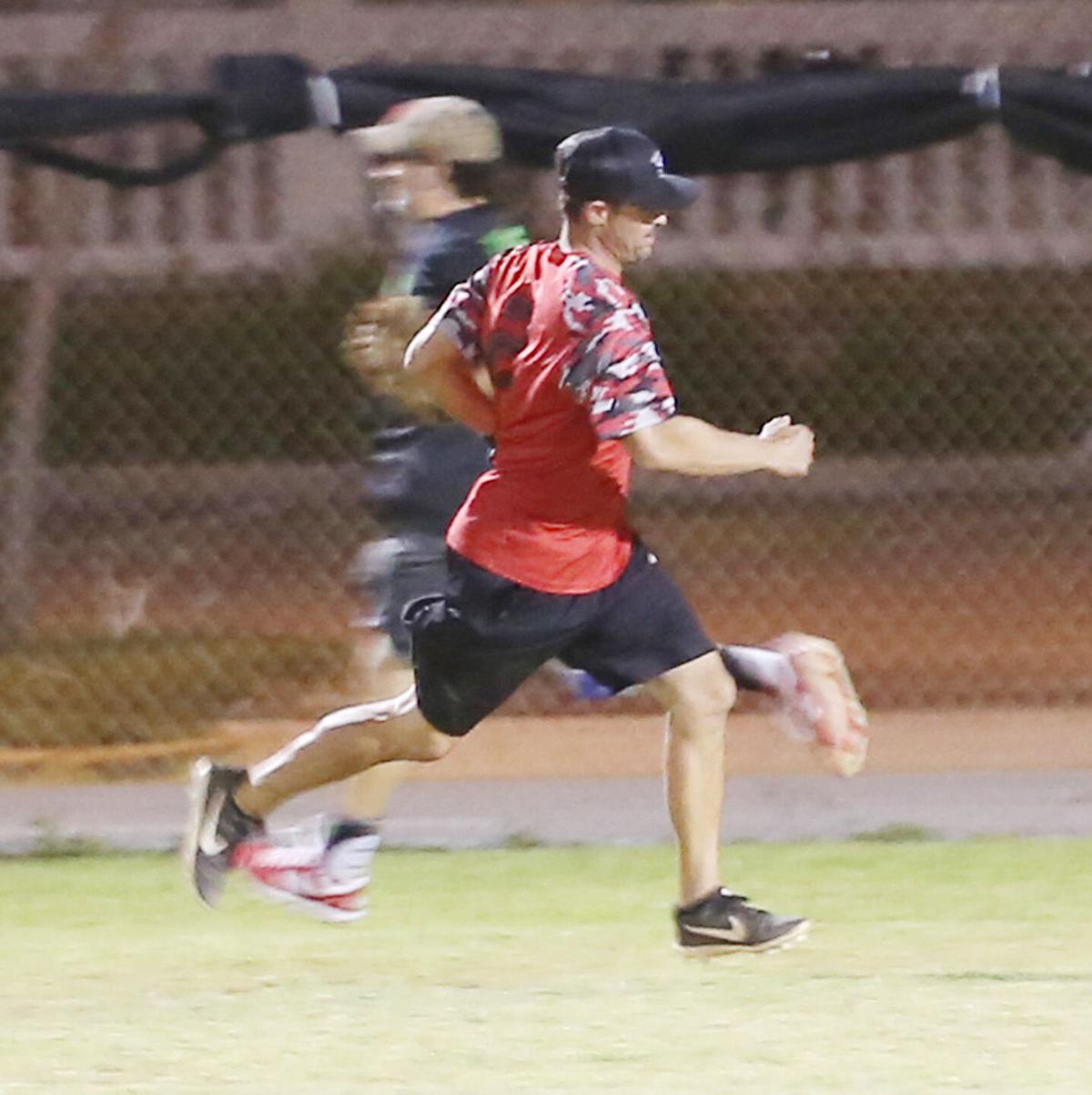 Right centerfielder Troy Curry (front) got the catch backed up by Dylan Kibler. 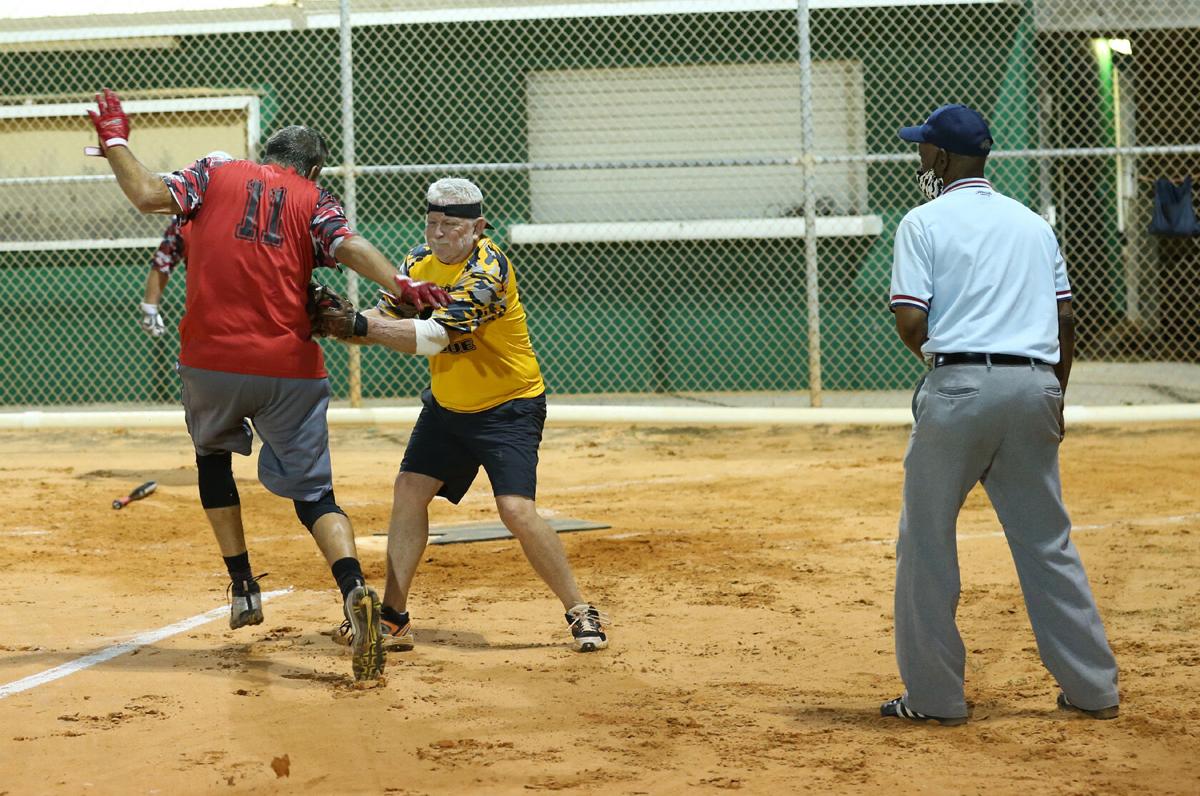 Umpire Rocky Portier had the angle to make the call on Jaibas’ baserunner John Hornyak, who tried to make it home but was tagged by Roncos catcher Tim Neely.

Shortstop Michael Balbuena had a little trouble getting the ball into his glove on Friday night at DeWitt Roberts Field.

Right centerfielder Troy Curry (front) got the catch backed up by Dylan Kibler.

Umpire Rocky Portier had the angle to make the call on Jaibas’ baserunner John Hornyak, who tried to make it home but was tagged by Roncos catcher Tim Neely.

The day before Halloween, things got even scarier in the standings for the cellar-dwellers, while another team in the middle of the pack did all it could to stay in the race in week six of the Men’s Over-37 Softball League at DeWitt Roberts Field.

The Jiabas pounded the Roncos further into submission and the Snappers set themselves up for a chance to bite into a share of first place.

On Friday night, in a game that will determine what the top of the standings look like, the Jiabas will cast their lines against the Snappers at 7, while the Morays hope to burn the winless Roncos at 8:30 p.m.

Breakfast again proved to be the most important meal of the day as the Roncos played them tough for the first two innings before the Jaibas put up seven runs in the third inning and six in the forth for the rout. The Jaibas had the hot bats, notching 41 hits ,while the Roncos only had 12. For the Jaibas, Ronnie Presley was red-hot going 6-for-6, as was Troy Curry with a double, three dingers and six RBI. Bobby Lopez belted a double and a round-tripper and had five hits on the night. Chris Hilliard and Nick Hogan added five base-raps too — one of Hogan’s was an in-the-park home run. Harry Milliken added four base raps, one a double, as did Ben Blattenbeger. John Hornyak and Dylan Kibler chipped in with three base hits, and both had doubles. Tom Haas chipped in with one hit.

Things were much more silent for the Roncos as their bat speed was that of drying caulk. Tim Nelly, Tommy Lapp, Mike Balbunua and Mark Hoffer all connected for two base thumps each. Rich Baker contributed with a dinger and John Childs, Darnell Henderson and Alexey Vergas chimed in with one base rap a piece.

In a score that more resembled a football game, 40 hits later, the doctor blew out the flame. The Snappers got off to a quick start and it was all but over after three innings, as they led 16-3 by that point. From there, the Morays managed to put up four runs in the fourth, but it was a little too late as the Snappers poured on 10 runs in the fifth inning and that about did it. For the Snappers, Juanito Menendez was the headliner with three dingers and four RBI. Kiki Lopez, Jose Santiago and David Flynn banged five hits each. Willie Rodriquez added four hits, two being doubles and Alexey Vergas also had four base raps, one being a double. Junior Guieb blasted in four RBI on three hits, two of them being touch ’em all blasts. Alex Torres, Sergio Botles and Winston Penja each got on base three times with three lined shots.

For the Morays, Ben Blattenbeger continued having a hot bat in the league with three base raps, one a double. Chris Hall and Ronnie Presley added three base knocks, both also with doubles. Harry Milliken contributed three base thumps too. Chris Hilliard (triple) and Troy Curry (double) had two hits each, as did Dylan Kibler, Doug Holmes and Bob Maun.