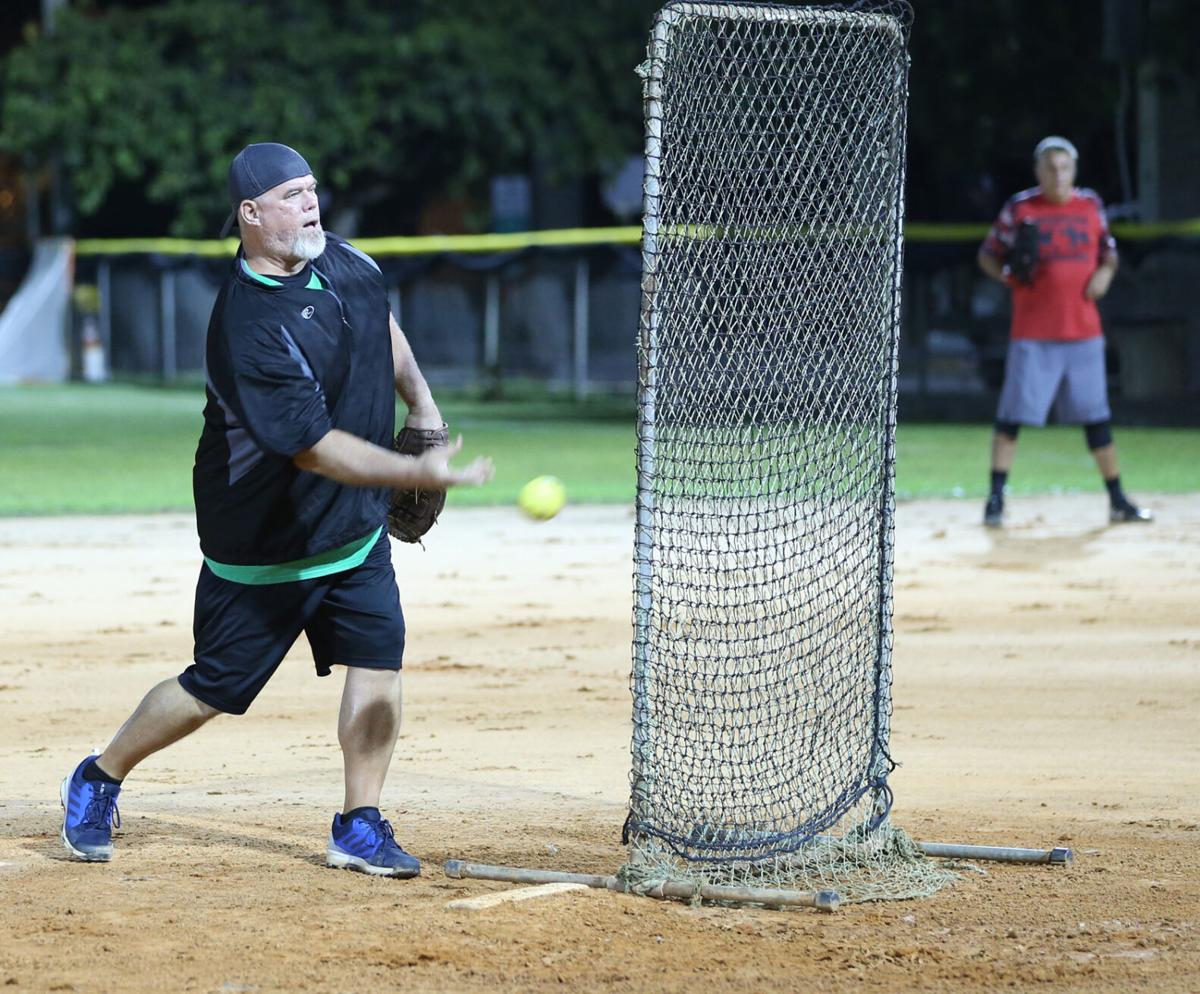 Backed up at first by John Hornyak, pitcher Harry Milliken wound up for a pitch a few Friday nights back. 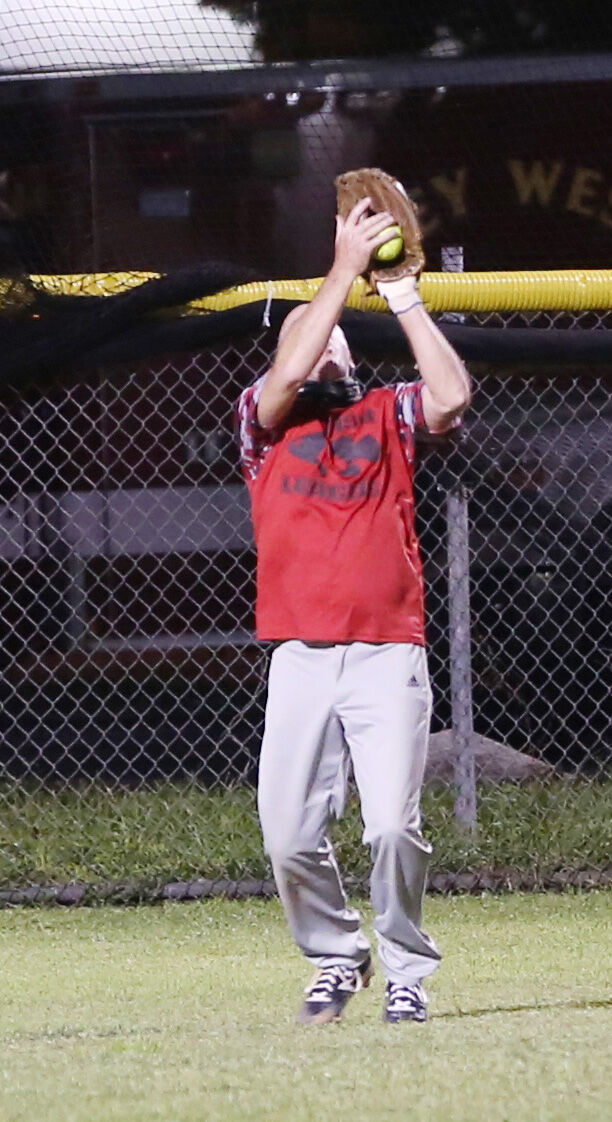 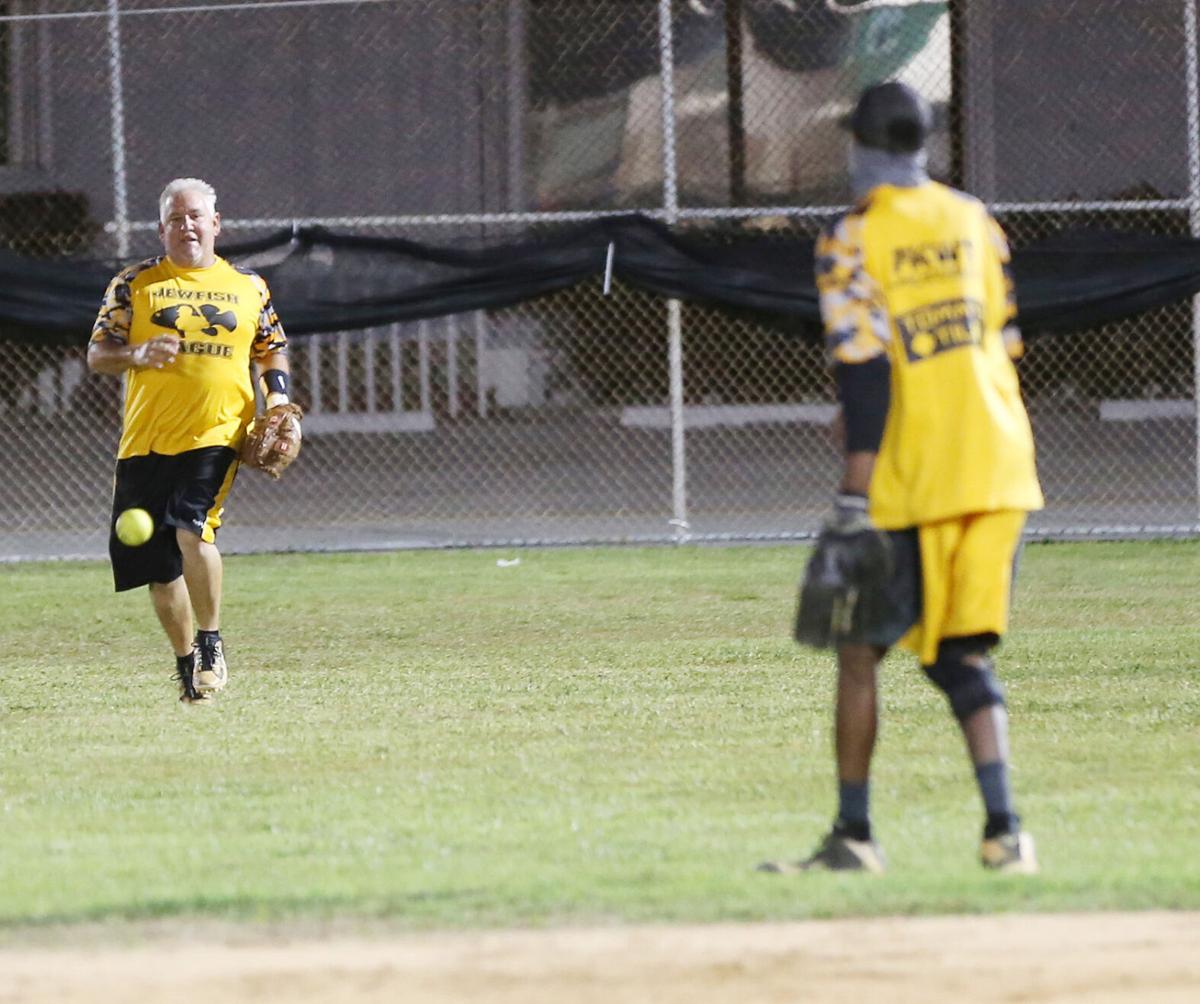 A ‘Texas Leaguer’ dropped between Roncos right centerfielder Tommy Lapp and Darnel Henderson from second base in recent action at DeWitt Roberts Field.

Backed up at first by John Hornyak, pitcher Harry Milliken wound up for a pitch a few Friday nights back.

A ‘Texas Leaguer’ dropped between Roncos right centerfielder Tommy Lapp and Darnel Henderson from second base in recent action at DeWitt Roberts Field.

It only took nearly half a season for the Tommy Tiles FKWT Roncos to reached the win column, as this past Friday they were finally able to get the goose egg off the standings and in the process helped Dr. Jerry’s Snappers move into first place all alone in the Key West Men’s Over-37 Softball League.

It was the eighth game of the season for the Roncos — who are still dwelling in the league’s cellar three games behind the Ben’s Candle Shop Moray out of third — while Breakfast Club Too Jaibas’ loss to the Tile Team left them a game out of first place.

The action at DeWitt Roberts Field will take a week off, due to the Thanksgiving break, and resume on Friday, Dec. 4.

Before even knowing the outcome of the nightcap, Dr. Jerry’s club dosed out runs in every inning to prescribe to the 11-run victory. Servio Botles had the cure in the win going 5-for-5 with a double, while Marty Gregurich needled four hits of his own. Juanito Menendez prodded a home run and double, Nick Hogan a double and triple, and Rich Baker two doubles all a part of his three hits. Also with three hits, were Alex Torres and Alexey Vergas. John Hornyak singles twice and Junior Guieb ordered up a home run.

The Morays could not meld together enough timely hits to buff away the lead, with Ben Blattenbeger waxing three hits to lead his team. Chris Hall burned the defense for a pair of doubles, Sean Cambridge for two singles, while Harry Milliken and Doug Holmes both had a two-base hit with Jeff Kurkowski and Troy Curry collecting a base hit.

Clearing the area with three long balls and two singles, Juanito Menendez’s six RBI laid out the way to victory for the Roncos, assisted by Doug Holmes’ 6-for-6 showing. Ben Blattenbeger also squared off on a triple and four base raps for five RBI, with Rich Baker coming a triple shy of the cycle with a home run, double on four hits. Tim Nelly had a single triple and a trio of singles, Tommy Lapp had two-base hits and a two-base hit, while Darnell Henderson and Alex Torres each singled thrice. Alexey Vegas doubled and singled, and Dylan Kibler singled twice.

For the Jaibas, Troy Curry and Ronnie Presley were hungry to keep their team in the game with a double and homer run each as part of their 4-for-4 night. Bobby Lopez tripled, doubled and singled, Marty Gregurich had two doubles and one single, and Chris Hilliard had one double and two singles. Nick Hogan was productive at the plate adding a triple and singles, dishing out doubles were Stu Lilly and Harry Milliken and double, cleaning up with singles were Tom Haas and John Hornyak.