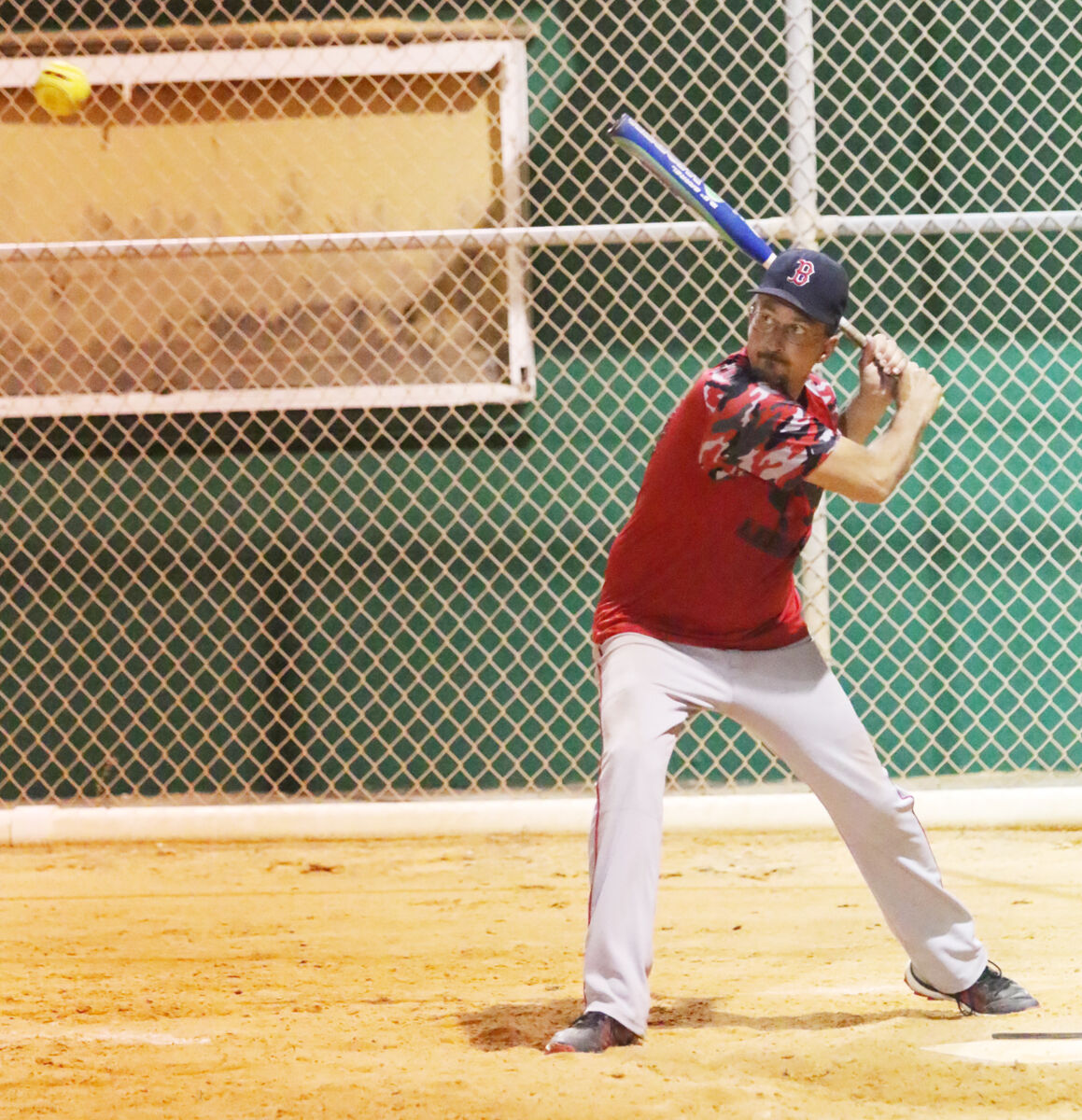 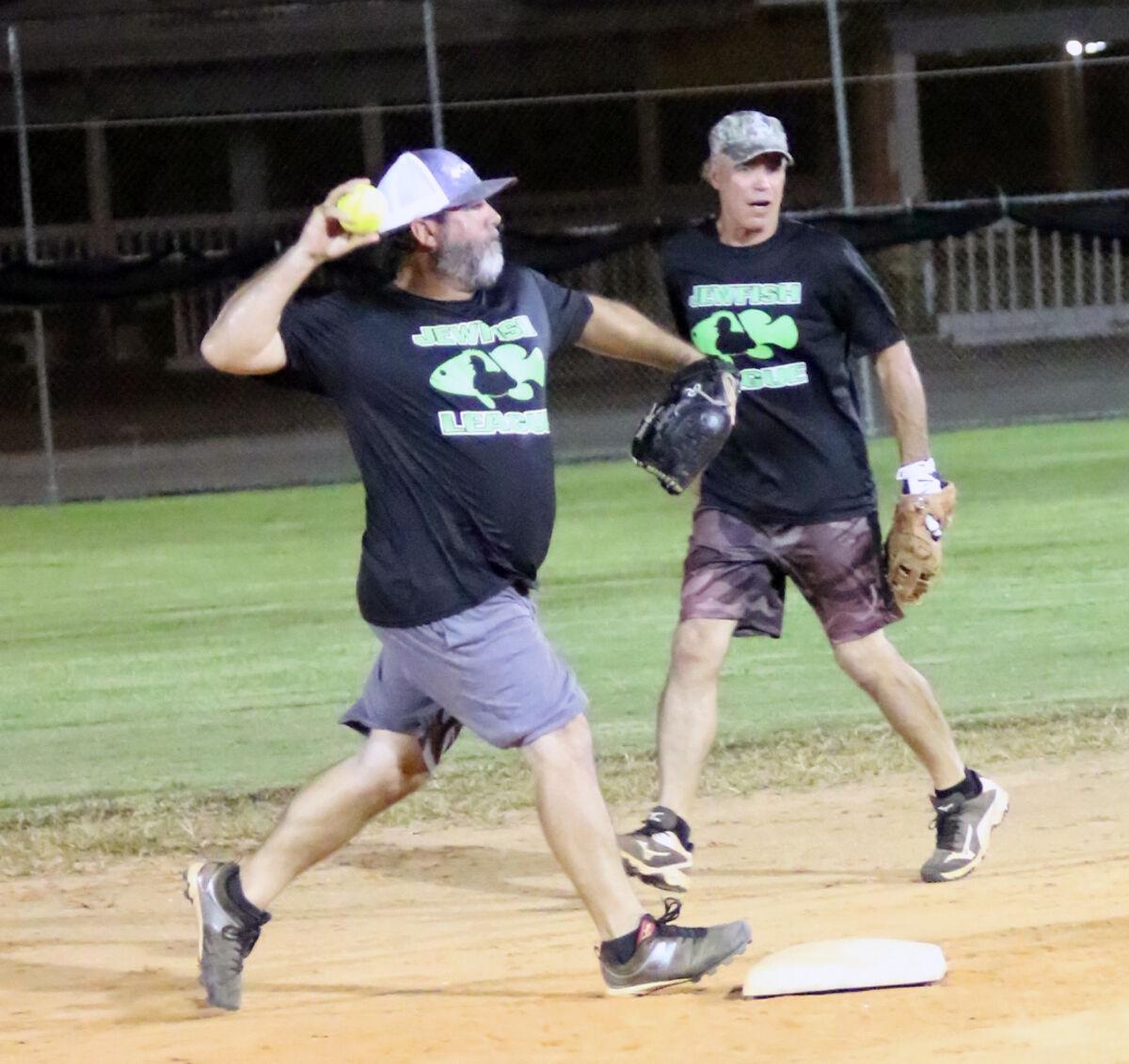 Morays second baseman Jeff Kurkowski watches shortstop Chris Hall step on second base for the first part of a double play during Men’s Over-37 League action at the Wickers Field Sports Complex.

Morays second baseman Jeff Kurkowski watches shortstop Chris Hall step on second base for the first part of a double play during Men’s Over-37 League action at the Wickers Field Sports Complex.

The battle for the No. 1 seed in the Key West Men’s Over-27 Softball League got a little tighter last Friday as previously unbeaten Breakfast Club too Jaibas were upended by Dr. Jerry’s Snappers, which has now won two straight, on a walk-off triple by John Childs. That allowed Ben’s Candle Shop Morays to move back into a tie for first, while Tommy Tiles FKWT Roncos remains the lone winless team in the grouping.

One of those two top teams, the Morays and Jaibas, will move out in front tonight as they are scheduled for the nightcap at 8:30 p.m. after the Roncos and Snapper meet up in the opener at 7.

Ben’s Candle Shop burned brightly, scoring all 21 of its runs in the first four frames, powered by Doug Holmes, who doubled and homered twice for four RBI, Ben Blattenberger, who was a homer shy of the cycle also with four RBI, Dylan Kibler and Chris Hilliard (triple) who were all 4-for-4. Adding a trio of knocks was Jeff Kurkowski, with a triple, while Harry Milliken and Nick Hogan both connected on a base hit and two-base hit, Gregg Eagle singled twice and Bob Maun once.

The Roncos attempted a seven-inning rally, scoring four times, but it was not enough to overcome the early deficit. Tim Nelly was still a perfect 5-for-5 for the Roncos, Rich Baker doubled one and singled twice, while also with three hits were Tommy Lapp, who doubled, John Childs, who parked a shot, and Alexey Vergas. David Flynn doubled and singled, Kenny Dispenza, Kenny Dispenza and Jimmy Hake had two base raps and with one was Jorge Martinez and Junior Guieb.

Fifteen runs in the first two at-bats for the Jaibas put the previously top-rank team in front by six run headed into the final frame of the evening. That’s when the Snappers mounted a comeback that was capped off by John Child’s third hit of the night, a triple to drive in David Flynn for the winning run. With four hits apiece for the Snappers, was Alexey Vergas, who doubled and homered for four RBI; Ron Bailey, who blasted two home runs and Junior Guieb. Willie Rodriquez and Jorge Martinez had a two-base hit and two base hits, Kiki Lopez singled three times while David Flynn doubled twice. Tommy Lapp rounded the bases with a longball, while Kenny Dispenza doubled and tripled.

For the Jaibas, Ronnie Presley sent home eight runs on a pair of doubles and triples, while also with four hits were teammates Stu Lilly, Harry Milliken, Dylan Kibler, Ben Blattenbeger and Jeff Kurkowski, with Milliken and Kibler both doubling.