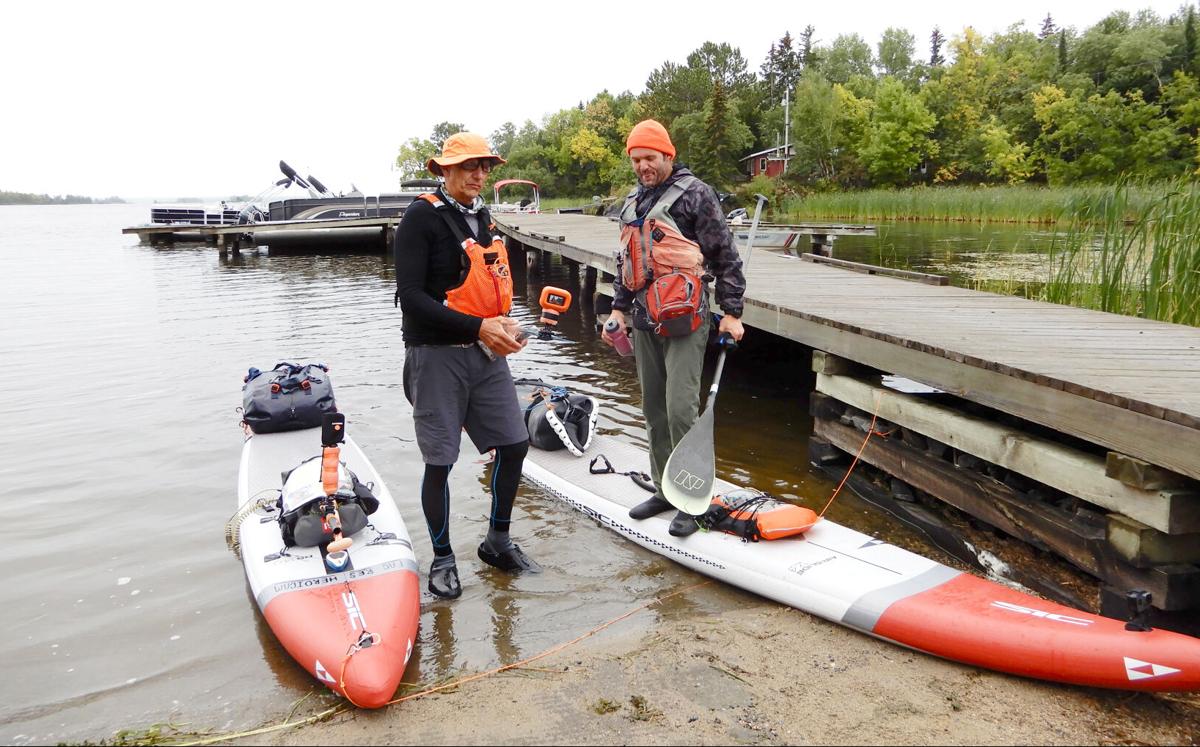 Tavernier resident and extreme paddleboard racer Scott Baste, left, along with John Knippers of Oklahoma, set a record in the paddle racing world by becoming the first to complete the 240-mile Kruger-Waddell WaterTribe Challenge in Minnesota. 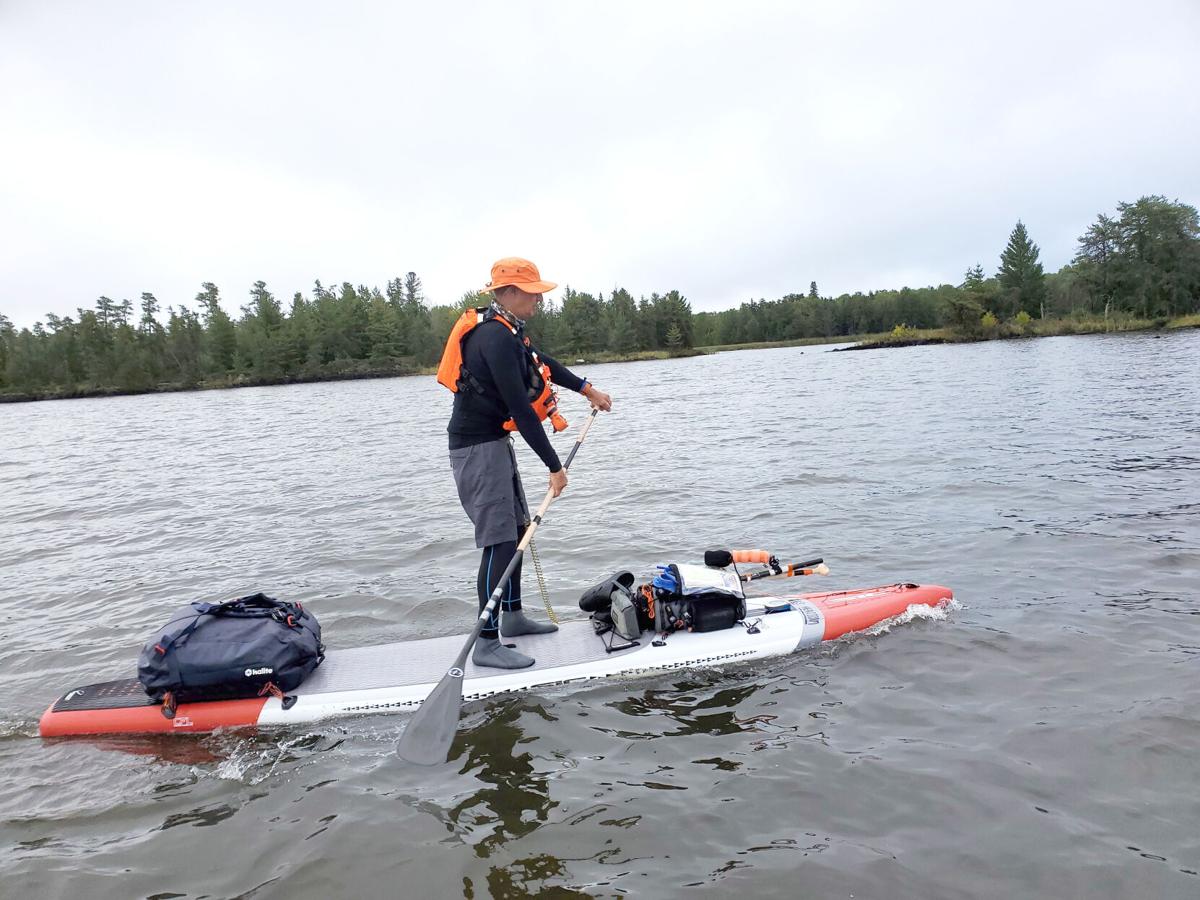 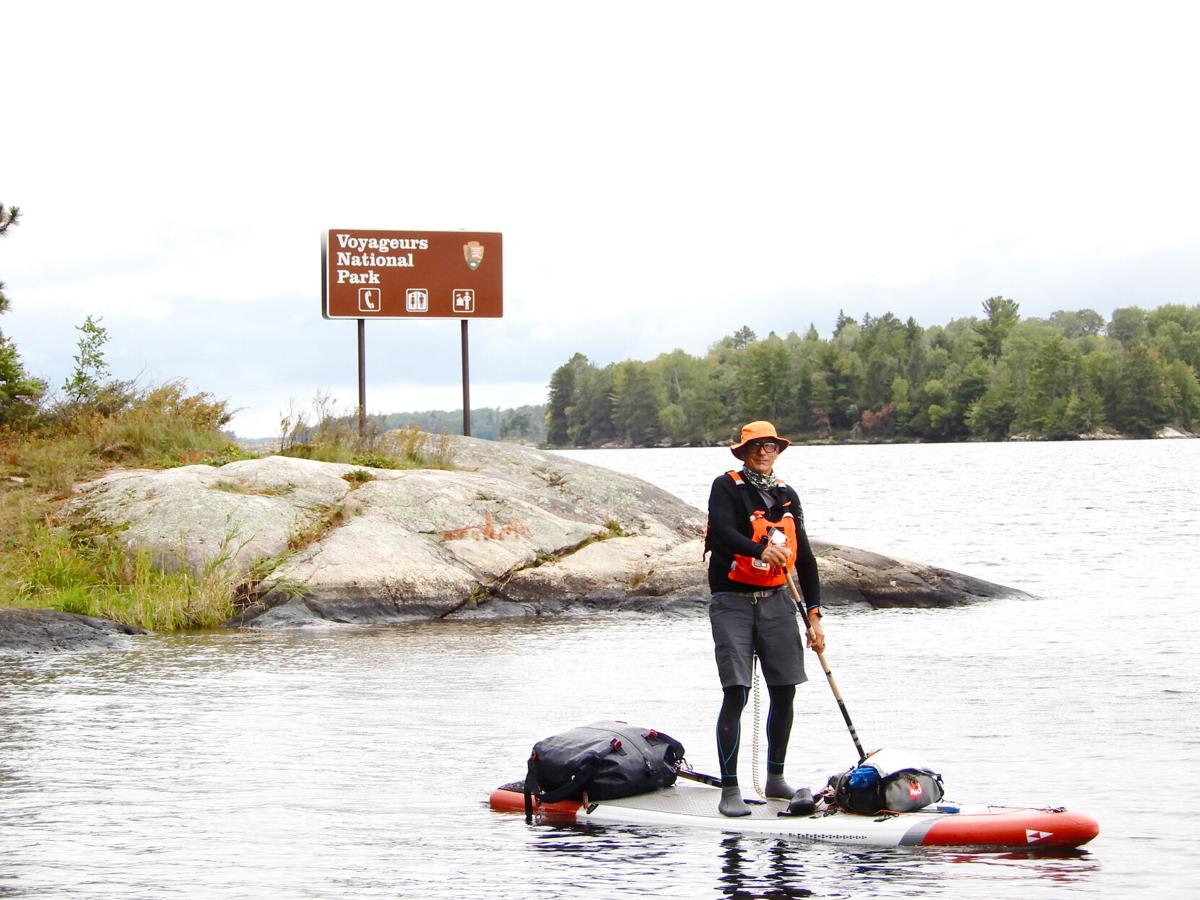 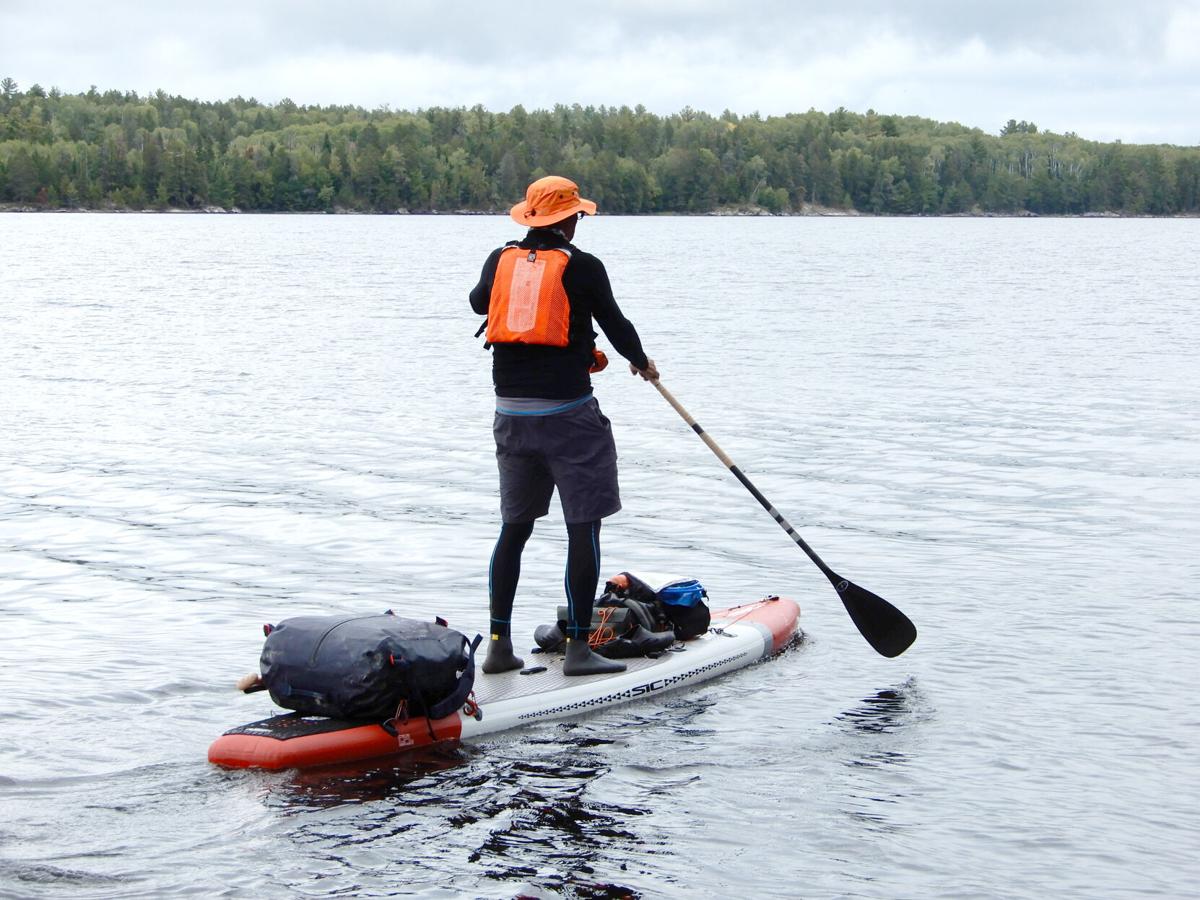 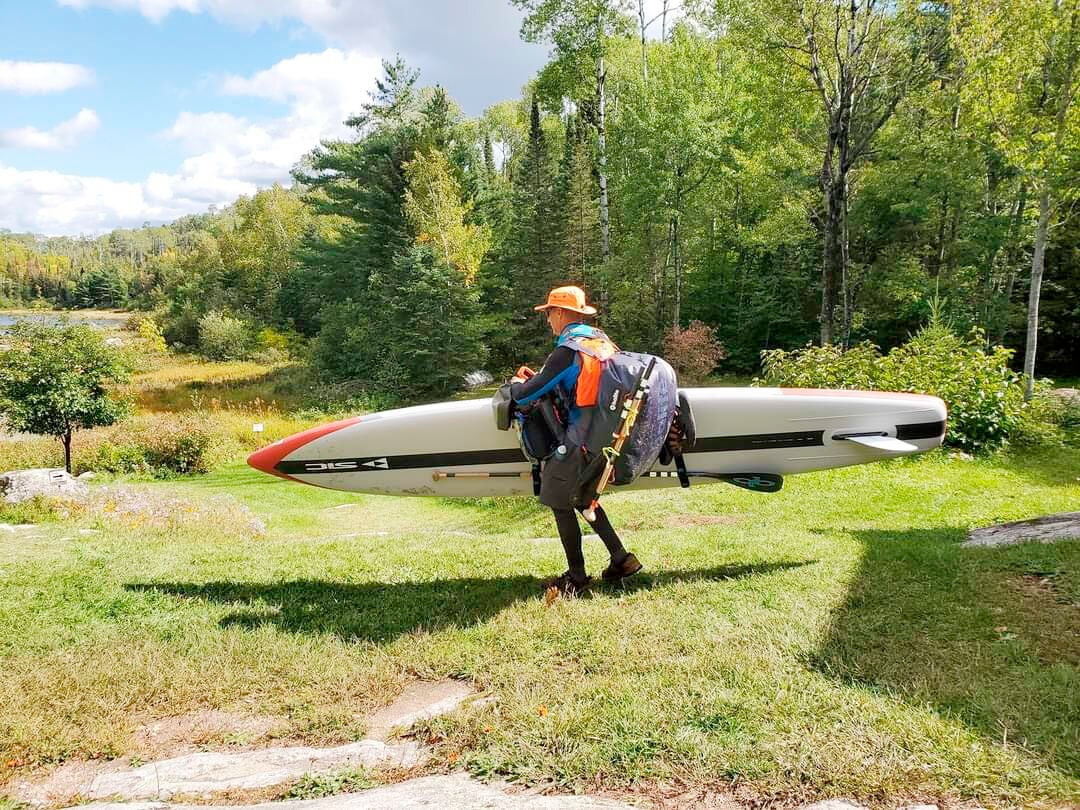 Portaging was one of the bigger challenges of the event. 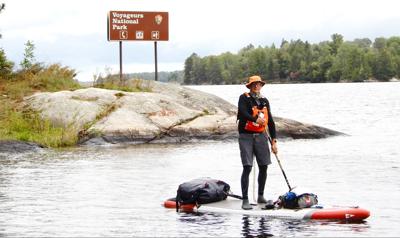 Tavernier resident and extreme paddleboard racer Scott Baste, left, along with John Knippers of Oklahoma, set a record in the paddle racing world by becoming the first to complete the 240-mile Kruger-Waddell WaterTribe Challenge in Minnesota.

Portaging was one of the bigger challenges of the event.

Standup paddleboarding maybe one of the preferred leisure activities on the water when it comes to the Florida Keys, but in more treacherous terrains a kayak, canoe or other semi-enclosed watercraft tends to be the preferred choice of transportation.

For most, that is.

An experienced distance racer, Baste began his career with the Missouri River 340-mile race — from Kansas City to St. Charles — which he completed in 60 hours. Since then, he has gone onto complete the Yukon 1,000-mile race — from Whitehorse, Yukon Territory, Canada through the Arctic Circle to Fairbanks — Alaska in eight days and 22 hours, and is the only standup paddler from the WaterTribe paddle group who has completed the Everglades Challenge, which factors in dealing with insects, dehydration, heat, alligators and boat traffic. He’s competed in the races in adverse conditions three times.

With such an adventurous spirit, Baste was not about to be slowed down by the coronavirus pandemic. Instead, he trekked ahead, setting a record in the paddle racing world by becoming the first to complete the 240-mile Kruger-Waddell WaterTribe Challenge across the Minnesota Boundary Waters Canoe Area using a standup paddleboard.

Preparing for these epic race events takes months of planning and training, so Baste has spends an average of seven miles a day paddling, six to seven days a week from his shop, Paddle the Florida Keys, in Tavernier, typically logging more than 2,500 miles a year.

On Sept. 20, all the conditions and preparations were in place to take on the Kruger-Wadell Challenge.

Joined by John Knippers, of Oklahoma, the duo would paddle 220 miles of lakes and rivers in remote areas in Minnesota, with the other 20 miles consisting of portages — during which Baste carried his 25-pound board and 45 pounds of food, camping and survival gear across rugged terrain.

“I’m an expert paddler, but I had little previous experience with portaging,” said Baste. “Some of the portage crossings were as short as a beaver dam, others 1-2 miles long, and the icing on the cake was the final 9-mile portage at the end.”

He said he received a lesson in the logistical nightmare of portages on his second crossing on the very first day.

“Grassy Portage sounds lovely, but in places, the path had knee-deep mud holes,” said Baste. “At 6-foot-4, I have the height advantage to work my way through the mud. However, my shoes did not and I was constantly having to reach down into a hole and retrieve my shoes that the suction of the mud had claimed.”

At the end of that particular portage, Baste explained was so relieved to get back on his board and paddle out to deeper water, that he didn’t realize he was only wearing one shoe. That meant spending the rest of the day, as well as part of the next, without his hiking shoes.

He had a substitute, a pair of Crocs he packed that he could wear to camp at night, and the next day he set out to ask everyone he passed if he could buy their shoes.

Luck would be on his side, as the very first person he asked just happened to have had an extra pair of 16s on his fishing boat, which was exactly what was needed because Baste wears size 14.

“With his two pairs of waterproof socks, it was a perfect fit,” he said of the replacement shoes. “Even more amazing is that [the person] visits the Florida Keys every year to fish, and while he has no intention of getting his shoes back, he plans to visit and see his shoes hanging on the trophy wall in my shop.”

He went on to describe the journey as “an incredible opportunity to immerse himself in nature and disconnect from the rest of the world.”

Minnesota’s BWCA is well-known for an abundance of wildlife, world-class fishing, and its scenic vistas and Baste was gifted with seeing beavers, otters, fish, “over-friendly” chipmunks, mice, red squirrels, eagles, loons, ducks and song birds. They saw evidence of moose, bear and coyotes, but never actually saw the animals.

The trip started out — after meeting up in Ely, Minnesota, with fellow paddlers from the WaterTribe and from there individual paddle teams drove to International Falls to start the event — with a light rain and warm temperatures, but by mid-week, Baste and Knippers were scraping ice off their boards on a 21-degree morning. When they started the challenge, there was very little evidence that fall was right around the corner, but by the time they were done, Northeast Minnesota was awash in a vibrant display of fall colors.

From there they were on their own to navigate against the current heading northeast to Grand Portage, Minnesota, home of the Anishinabe (Ojibwe) Reservation and the historic National Park Service Monument.

The Kruger -Waddell Challenge commemorates the record-setting voyage of Verlene Kruger and Clint Waddell, who in 1969 completed the historical “Voyager” route in 80 hours and 40 minutes via canoe. The route closely follows the U.S.-Canada border, so racers were careful to stay on the U.S. side and only go on Canadian soil if there was an extreme emergency, which thankfully, there was not.

Baste completed the 240-mile challenge in seven days and 10 hours, the first as standup paddler, but not likely his last major feat on a paddleboard, as the Upper Keys resident has taken the sport to another level.

“Considering the difficulty of the event, we were very pleased with our accomplishment,” said Baste, noting fellow WaterTribe member Tom Head, of Tavernier, completed the challenge as a canoe team member. “The digital detox of not having cell or internet service for seven days was wonderful, but I was also very happy to see my wife, Betsy, waiting for me at the finish line.”

“Considering the difficulty of the event, we were very pleased with our accomplishment. The digital detox of not having cell or internet service for seven days was wonderful, but I was also very happy to see my wife, Betsy, waiting for me at the finish line.”