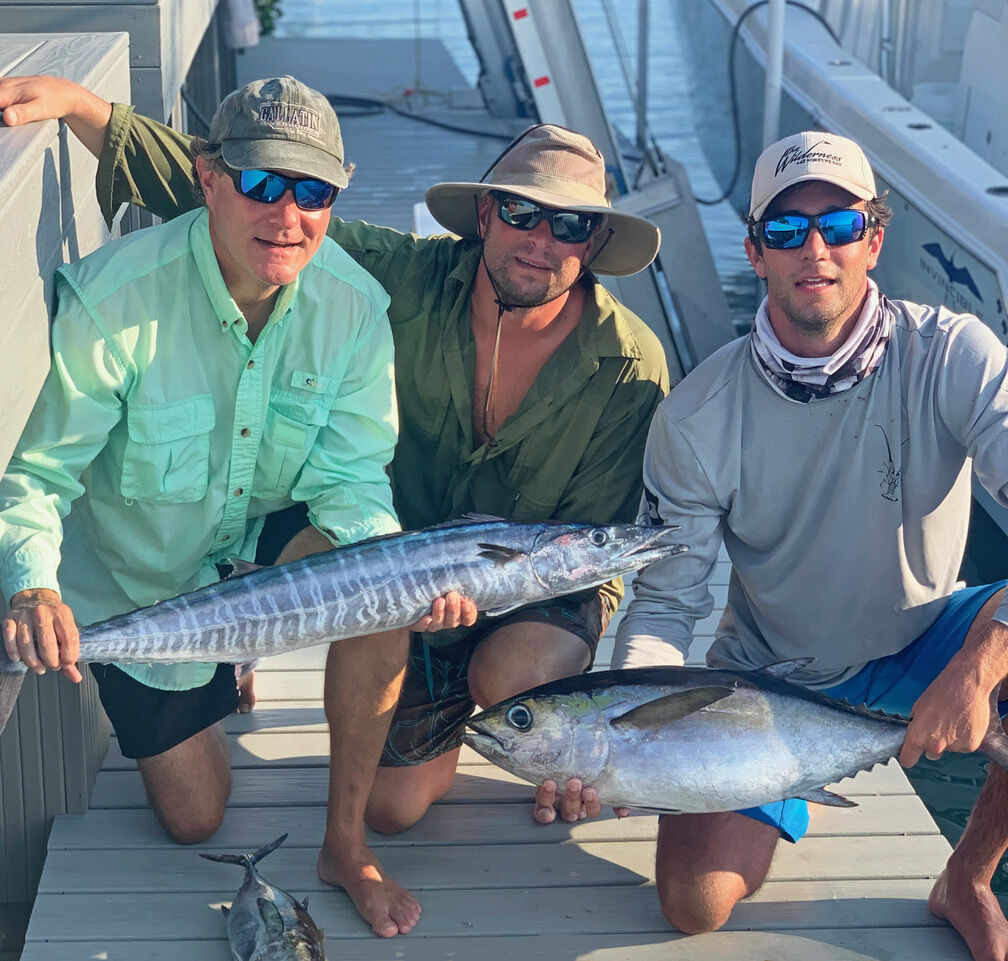 Todd Connell, from left, Nate Erno and Adam Connell, all from Wisconsin, had a fabulous day of Florida Keys fishing with Dan Connell of Key Colony Beach. 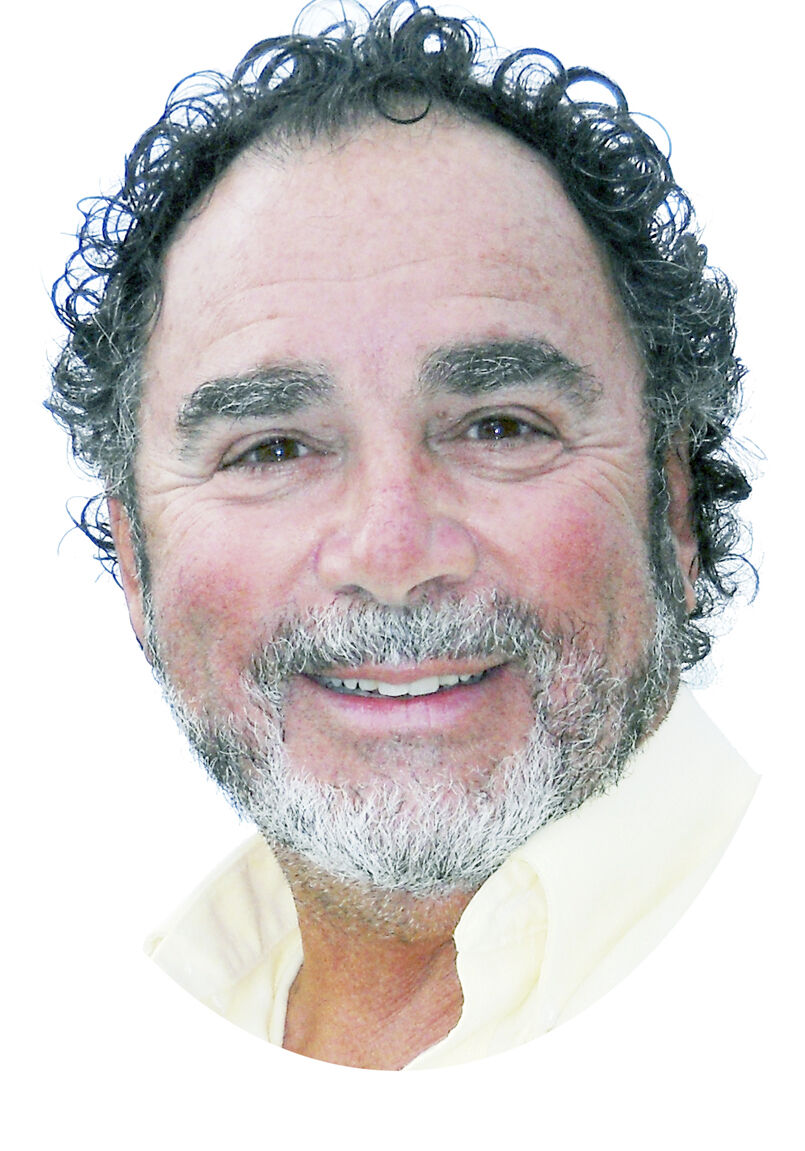 This column is dedicated to the recreational fisherperson who wants to have a good time, get the boat wet, spend time with friends and family, and maybe catch a couple fish.

Hey, ask me how my fishing buddy and I did the last two Saturdays. Smugly, I will reply, “Oh not bad, nothing out of the ordinary: dolphin, wahoo, kingfish, tuna, and marlin. You know, the usual.” I still can’t keep a straight face when I say it. Every time I put a bait in the water something terrific happened. Now, all these fish didn’t quite get in the boat, but they did all get hooked up.

The marlin hit a blue and white Ilander with ballyhoo behind it in 700 feet of water at a weed line. He was caught on forty-pound mono and for the first minute didn’t even know he was hooked. Then, all hell broke loose. Line ran off that reel faster than I have ever seen. This fish was exquisite. He jumped in the air and flung shiny water spray that sparkled in the mid-day sun, then loped across the prop-wash in what the old-timers call grey-hounding. We had only five wraps of fishing line left on the reel and shifted the boat into reverse and floored it. This can be very exciting in a twenty-four foot outboard.

The fish was so fast that the angler was looking out the left side of the boat and the fish was jumping on the right side. “There’s another one.” He screamed. But, it was his fish — surfaced a hundred yards out and not amused at what we had done to him. We made some progress and the fish was coming toward the boat and then out of nowhere he laid on his side and started thrashing his tail and skipped across the water like a flat rock. Mind-boggling. He shook his head as he rocketed away from us and we could see the lure sliding up the leader to the swivel. He made a frothy trail out of deep blue ocean and then just kept swimming while the line went slack. He’s gone. We reeled the line back in, and the 9/0 hook had been straightened out like a darning needle. Back in Orlando, we used to call that a Palm Beach release.

Out at the Marathon Hump we trolled half-ounce black and red feathers tied directly to clear thirty-pound monofilament line three hundred feet behind the boat. We boated some delectable black fin tunas and released two of the biggest, hardest fighting, skip-jack tunas I’ve ever caught. These brutes, as anybody who has caught one knows, are exhausting and back breaking. Speaking of which, I got a call from a friend and he told me about a big fish he fought out about 120 feet of water. He thought it might have been a big grouper, but turns out it was some huge amberjack. Anyway, the fish fought so hard that he had to sit down and rest. His chest was pounding and he got short of breath and a little dizzy. Since he was alone, he phoned someone he knew on shore and told him, “Call me back on my cell phone in five minutes and if I don’t answer call these coordinates into the Coast Guard and tell them I’ve had a heart attack or something.”

Hmm, this doesn’t sound good. So…the friend called him back in five minutes. And, after repeating this drill three times, it was decided that all was well. I asked my friend if he was planning to go the doctor, and he replied, “Nah, I’m leaving to go back to New York on Friday and all I fish for up there is carp.” Now, I don’t think this approach will ever make it into the American Medical Journal, but it does give the uninitiated some insight as to the mind of the fisherman or fisherwoman.”

On the way out to deeper water the next Saturday we put some lines out when we reached two hundred feet. We were trolling a red and black Ilander with ballyhoo on the downrigger. After just a few minutes line started screaming off the reel and after a hard fight we had a beautiful wahoo almost within gaffing range. A comedy of errors later, the wahoo swam away with the lure, and we had egg on our faces. Losing a big fish like that at the side of the boat is nothing less than heart breaking. But big fish are difficult to catch. After all, that’s how they became big.

We did what we were supposed to do and talked about what might have gone wrong. Next time we would be more prepared. We fished that area and went out to deeper water, but nothing happened, so we came back in to 120 feet. We ran a black and red Billy Bait with ballyhoo on the downrigger and hooked a real nice kingfish. We were like a well-oiled machine. No mistakes. The other lines were cleared quickly, my buddy fought the fish like a champ and the gaff was flawless. Now we’re having a good time. We ran back over the same area and boated another nice kingfish. We felt exonerated. We had put ourselves on fishing probation and now we were free. Woo hoo.

We had run out of rigged ballyhoo. We tried trolling the same lures without ballyhoo, and after three fruitless passes through our hotspot called it a day and headed home. This just goes to show that when you find a winning combination out there; you shouldn’t deviate from it.

I’ve heard the snapper bite in deeper water (80 to 110 feet) has been spectacular. I have wanted to try this but the call of big fish on trolling gear had gotten to me. Perhaps next time. My daughter and g-g-grandson are coming this weekend and I am looking forward to spending some time on the water with them. Life couldn’t be better in the Florida Keys. This is exactly why I moved here; and it is living up to my every expectation.

C.J. Geotis is a life-long fisherman who followed his dream 20 years ago to live in the Florida Keys. His book, Florida Keys Fish Stories, is available at Amazon.com. He lives in Marathon with his wife, Loretta, and her Coca-Cola collection. His email is fishstoriescj@comcast.net.

C.J. Geotis is a life-long fisherman who followed his dream 20 years ago to live in the Florida Keys. His book, Florida Keys Fish Stories, is available at Amazon.com. He lives in Marathon with his wife, Loretta, and her Coca-Cola collection. His email is fishstoriescj@comcast.net.