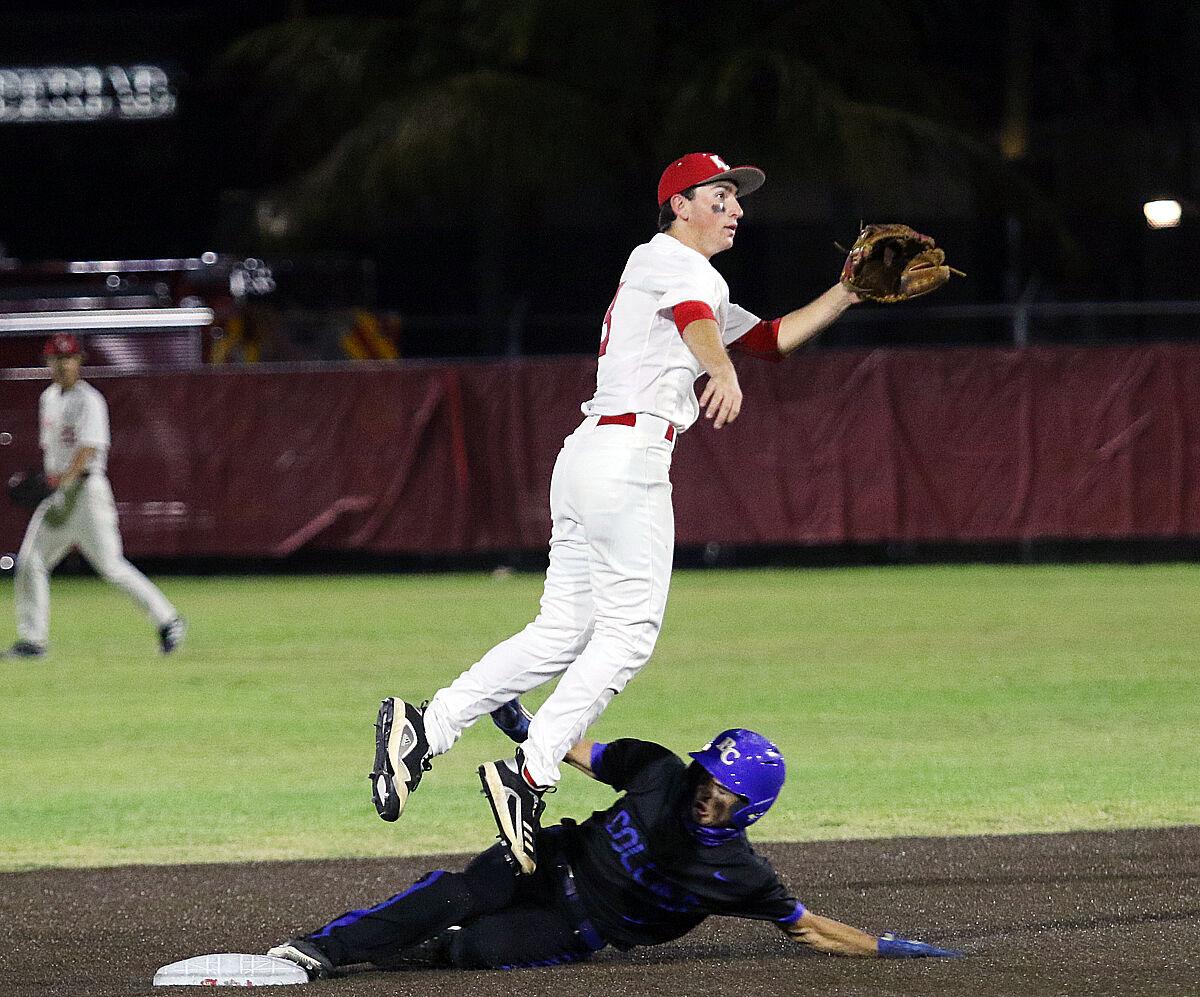 Conchs shortstop Kai Smith jumps for a ball over the Cougars’ Alex Kuenzie on Friday. 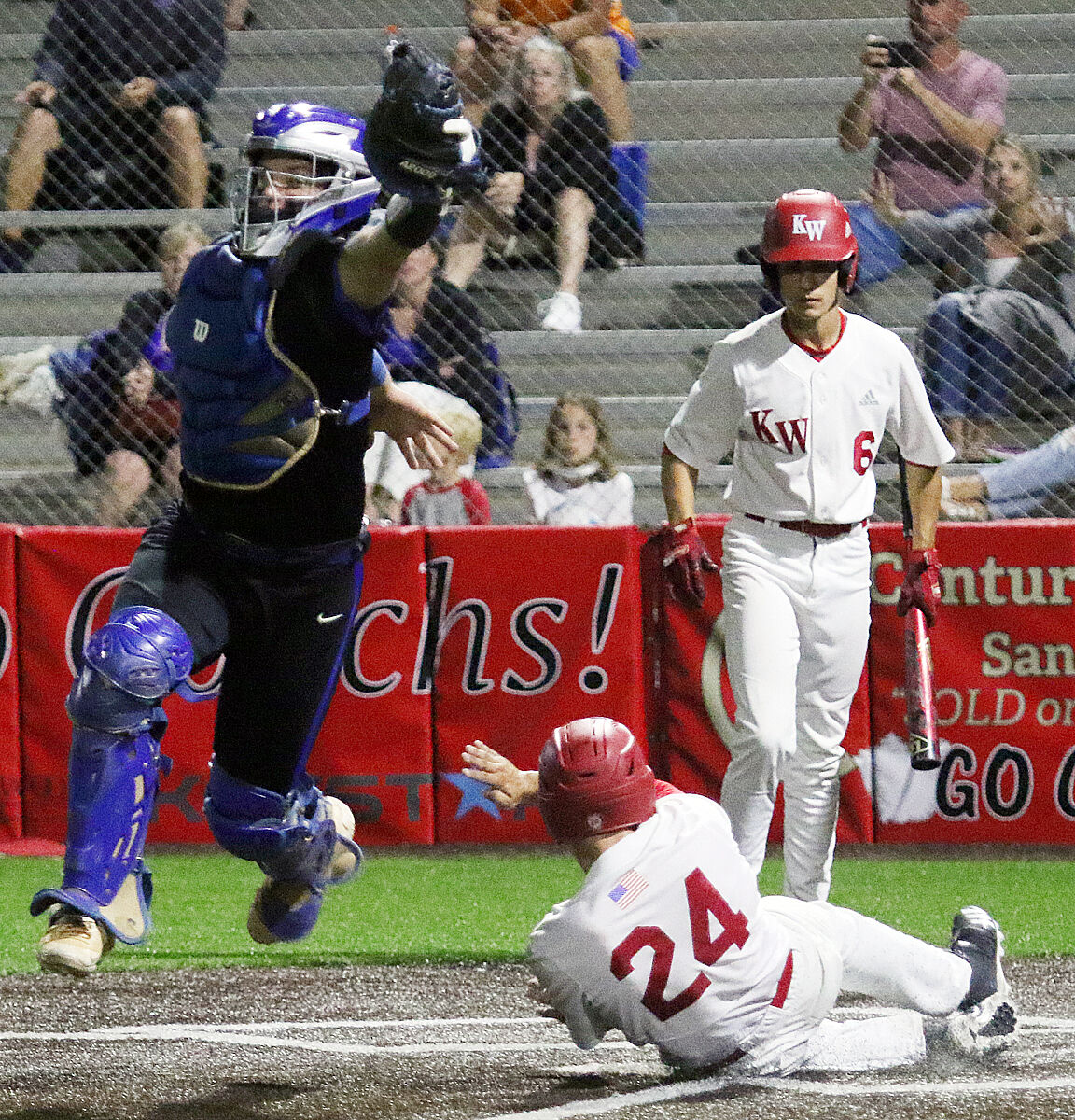 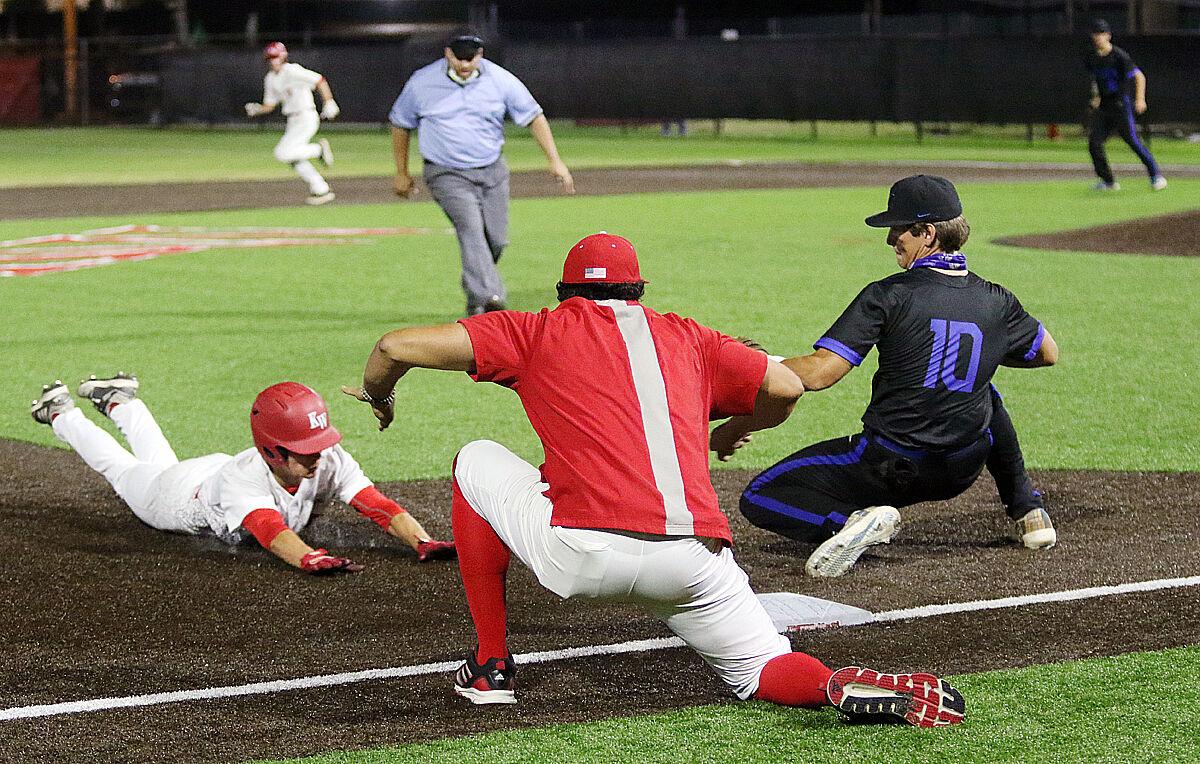 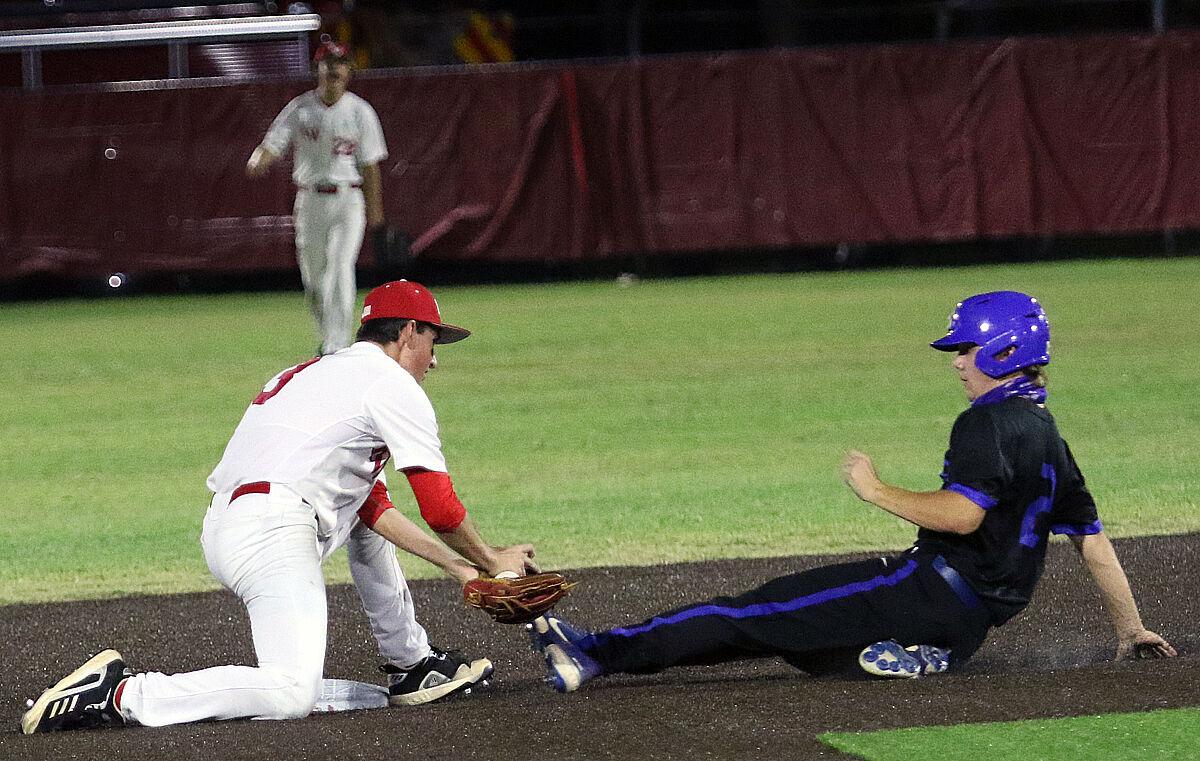 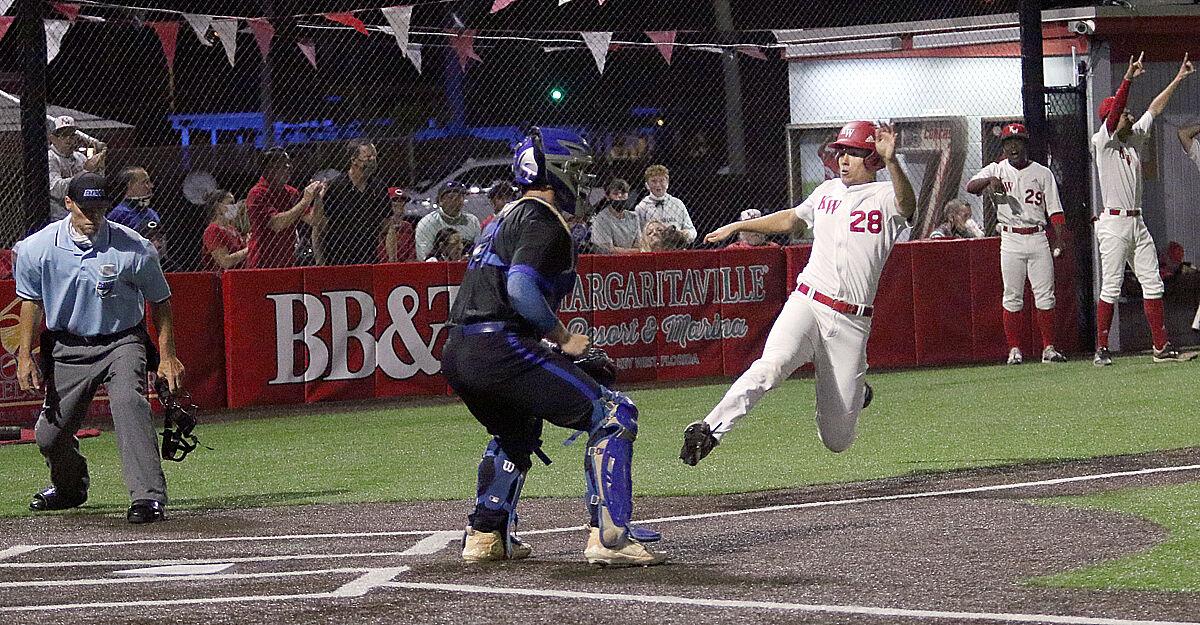 Michael Alfonso begins his slide home to score a run past the Cougars cather Noah White. 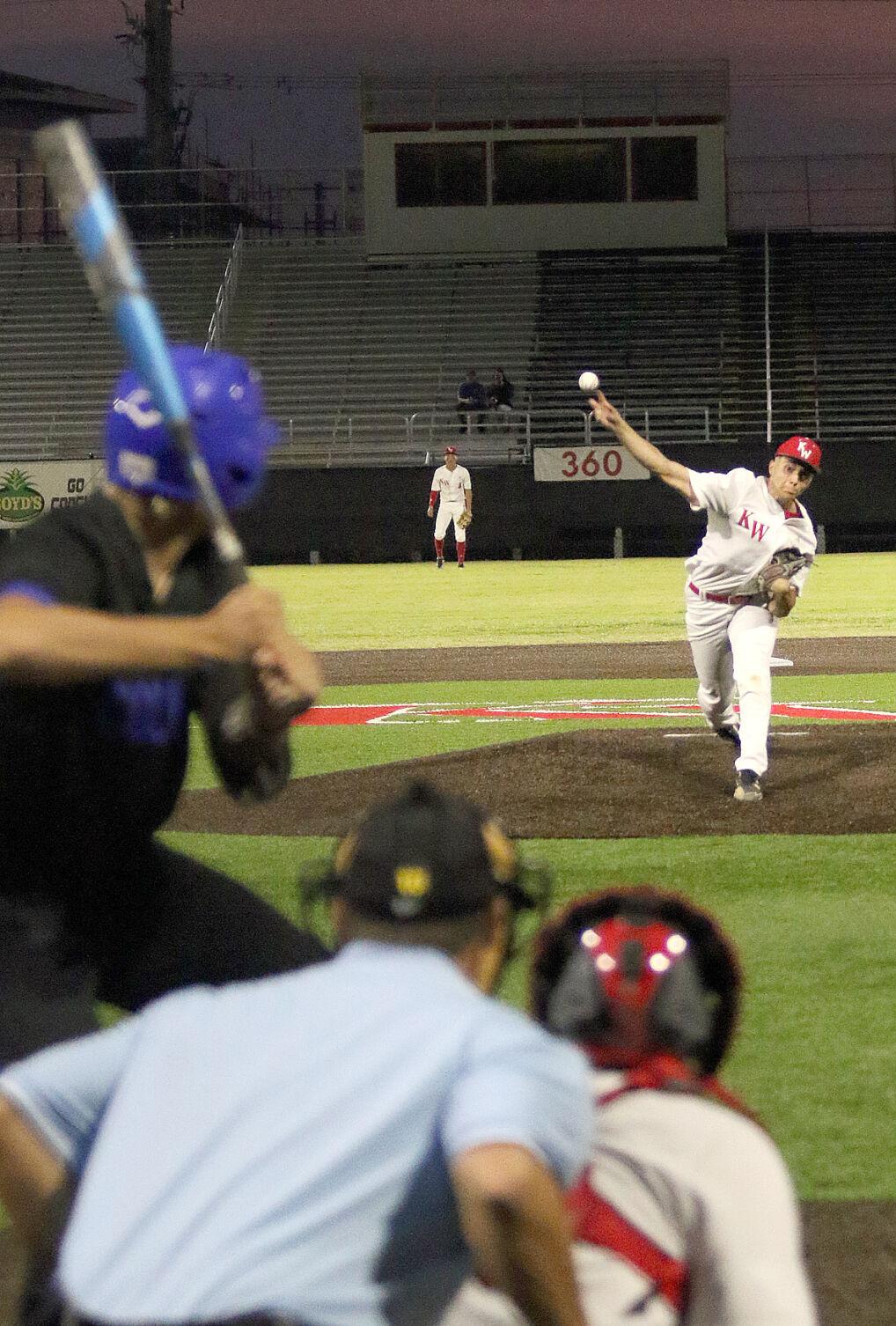 The Conchs’ Michael Alfonso delivers a pitch to the plate. 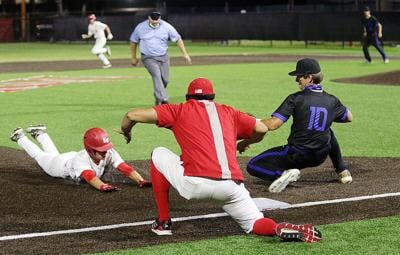 Conchs shortstop Kai Smith jumps for a ball over the Cougars’ Alex Kuenzie on Friday.

Michael Alfonso begins his slide home to score a run past the Cougars cather Noah White.

The Conchs’ Michael Alfonso delivers a pitch to the plate.

Twice the game-winning run stood just 90-feet away for the Key West High baseball team, as well as the tying run in extras, all three of which would be stranded at third during an 8-7 loss on Friday to Barron Collier, then a night later the Conchs could not keep the runners on base as the Cougars scored three in their final at-bat to rally for a 6-4 victory and the two-game series sweep at Rex Weech Field.

Friday’s loss was the fourth time the Conchs have played into extra innings this season, winning just one of those, while it was also the sixth one-run loss of the season and ninth time they had the potential go-ahead or game-winning run in scoring position.

This time around Key West had chances to score the game-winner in the seventh and eighth, the first coming after the Conchs rallied for two runs in the final frame of regulation play on singles by Trevor Zuelch, Nate Barroso, and Kai Smith, as well as a doubled down the right-field line by Jaden Burchfield.

That at least sent the game into extras when in the bottom half of the eighth Key West had another opportunity to walk-off winners after Landon Lowe opened the frame with a double. The bases would load after a pair of walks, but the Conchs could not come up with the opportune hit and leave three more, of the 16 stranded in the game, on base.

Barron Collier would score three runs in the ninth, seemingly putting the game out of reach, but a pair of hit batters with one out brought up Key West’s top hitter to the plate and Lowe crushed a triple to the deepest part of right field to make it a one-run difference. That’s where he would end the game as a pair of strikeouts ended the threat.

Despite coming up a run short, Key West outhit Barron Collier 13-10 — Lowe coming up a homer shy of the cycle, while Burchfield, Barroso, Smith, and Zuelch all had multi-hit games, while Wyatt Kuhn and Daniel Varela had one each — as Conchs ace Michael Alfonso was making his home debut on the mound. The Cougars would get to him for three earned runs on six hits and two walks, while the senior righty struck out seven in 5 2/3 innings of work.

A night later, Key West was in another early hole, allowing three runs in the first, but freshman hurler Jacob Burnham settled down from there and did not allow another run in 4 1/3 innings of work. He would strike out three and allow four hits and five walks.

That allowed the Conchs to take a one-run lead on a pair of runs in the fourth and sixth into the Cougars’ final at-bat of the weekend. Those runs were scored in the fourth on an RBI infield single by Logan Pellicier and sacrifice fly by Alfonso that sent home Varela who doubled earlier in the at-bat, and in the sixth after singles by Varela and Alfonso and a double by Smith.

Key West could not hold the lead as the first three batters in the seventh for Barron Collier all reached safely, the first two runners scoring on a double, with a wild pitch allowing the third run of the frame to touch home.

After giving away the lead, Key West did not muster up any more fight in the seventh as they were retired to drop its seventh consecutive loss, despite outhitting the Cougars 20-19 in the series.

It was also the seventh straight loss for Key West at the Rex this season, winning only against Coral Shores in the preseason, but three of the final four games of the season for the Conchs will be at home. The 13th and final home game of the regular season for Key West will be played on Friday at Gulliver Prep, which will be followed on Saturday with a home game against Westminster Christian at 7:30 p.m. The following weekend, Keys Gate will head south from Homestead to play a two-game set at the Rex in the regular-season finale.