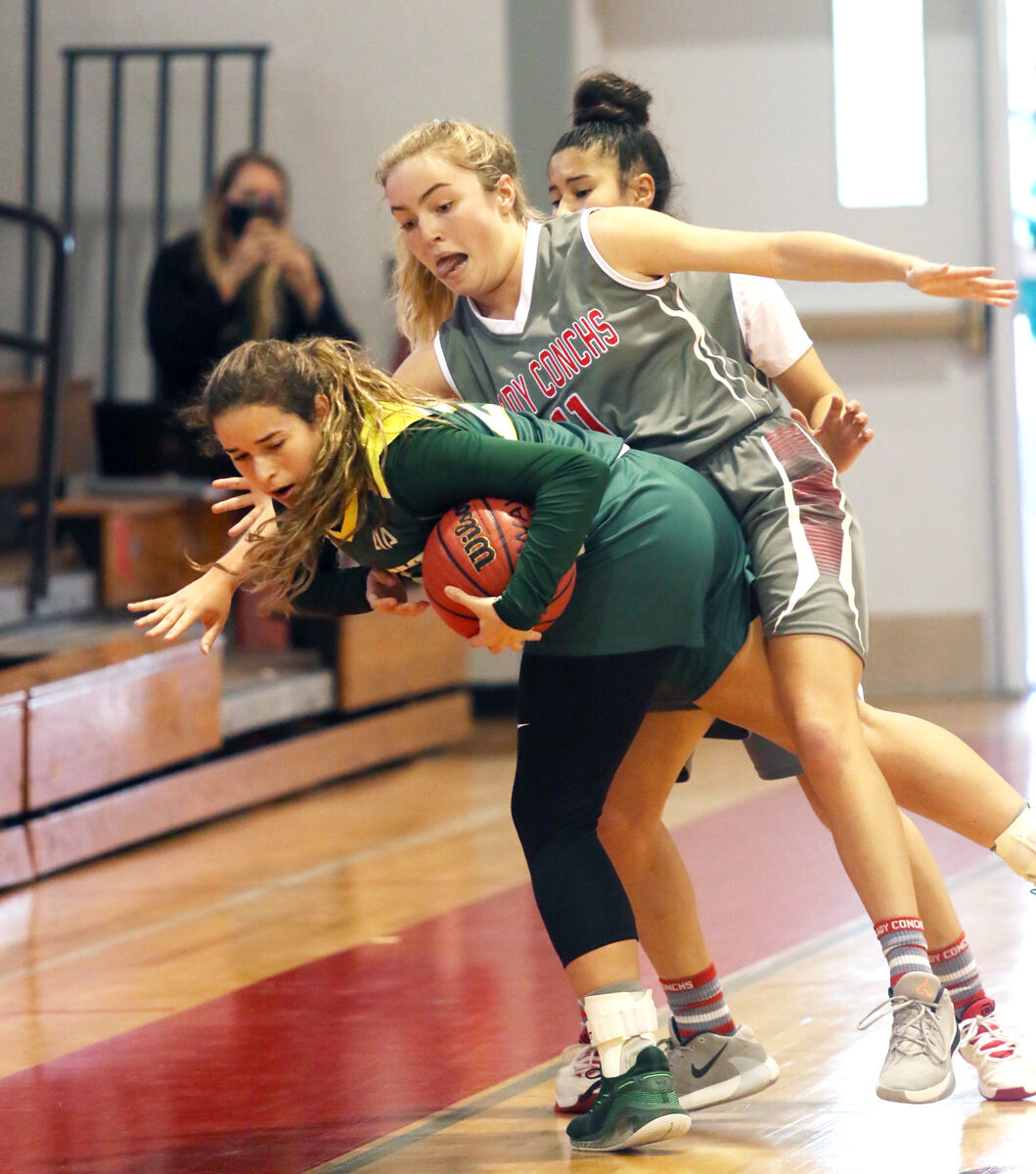 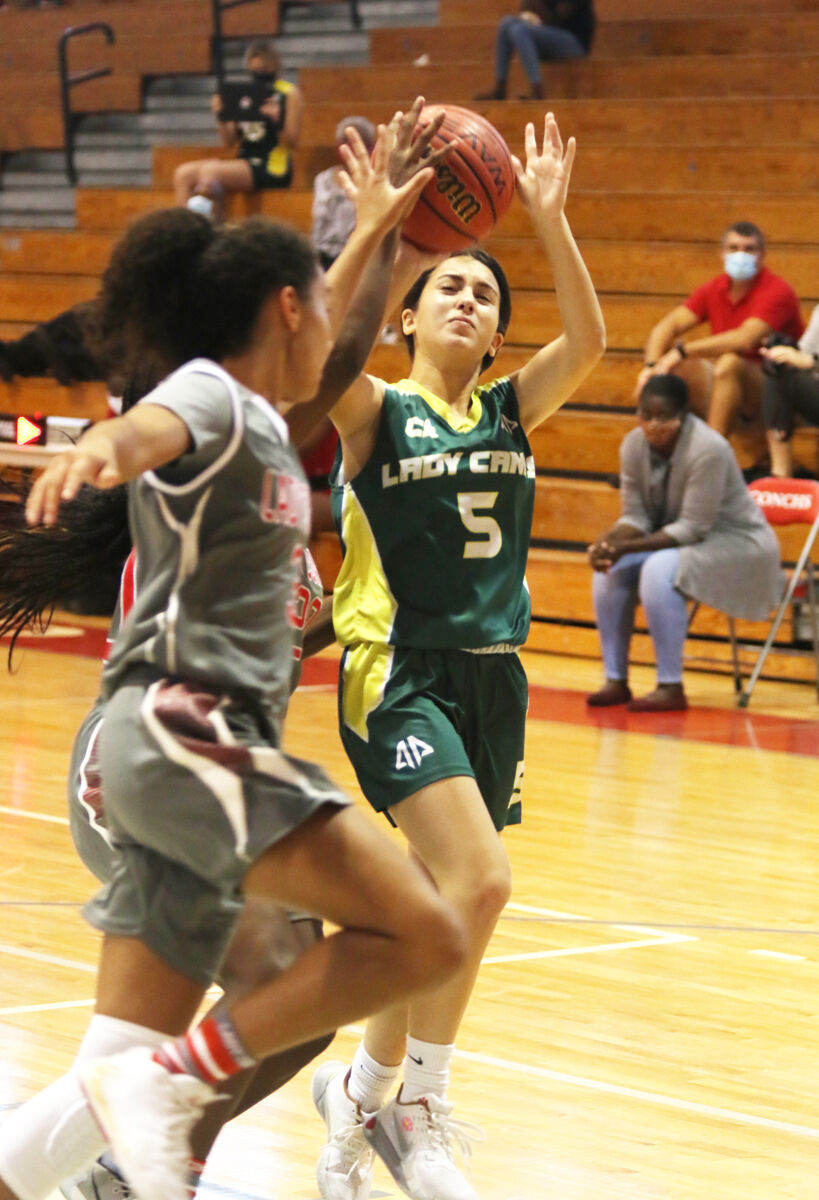 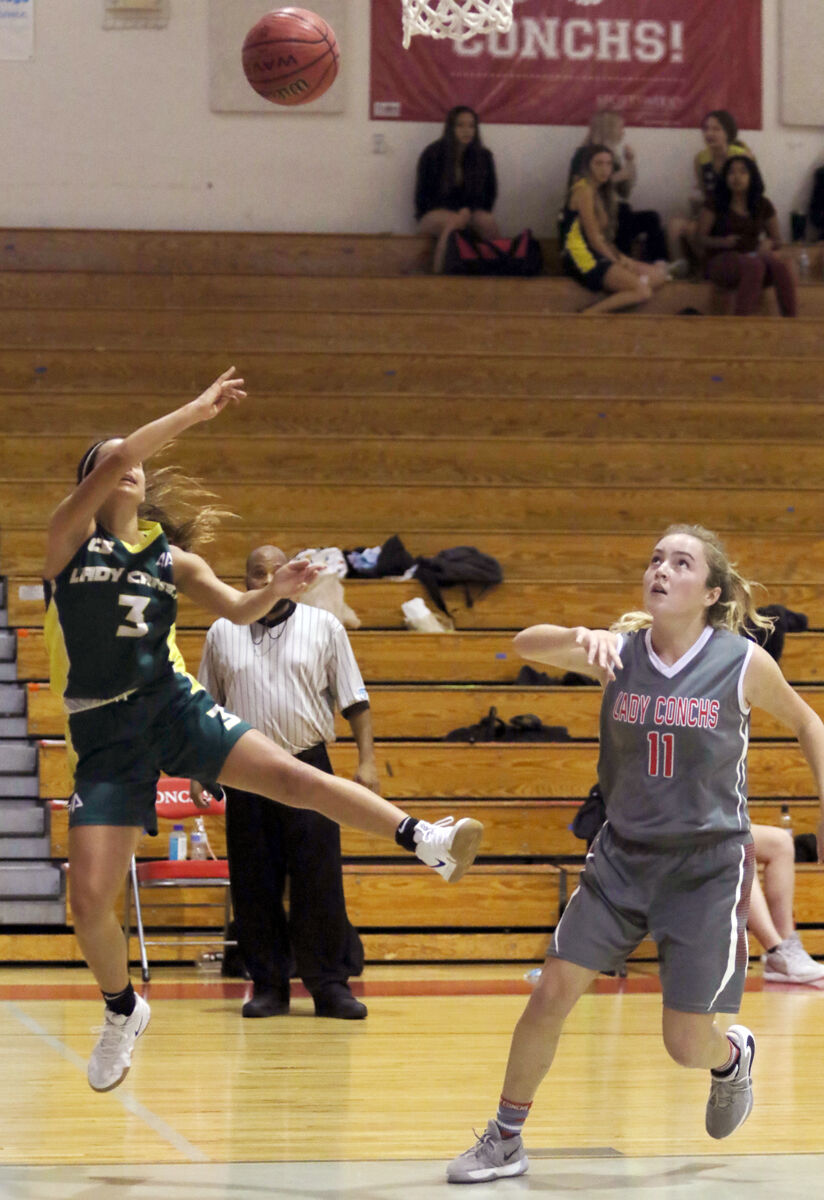 Lady ’Canes senior Lucia Rodriguez follows through on a shot while being trailed by Lady Conchs senior Sarah Centonze on Thursday in the Key West home opener.

Coral Shores forward Riley Dobson, left, and Key West guard Mohina Rahkmonova drive for the ball to no avail as referee Ricky Brown signals the play out of bounds on Thursday at Bill Butler Court.

Lady ’Canes senior Lucia Rodriguez follows through on a shot while being trailed by Lady Conchs senior Sarah Centonze on Thursday in the Key West home opener.

Coral Shores forward Riley Dobson, left, and Key West guard Mohina Rahkmonova drive for the ball to no avail as referee Ricky Brown signals the play out of bounds on Thursday at Bill Butler Court.

The respect is mutual between the Coral Shores and Key West High girls basketball teams, so much so that both expect to be facing each other for the District 16-4A title this season. So Thursday afternoon, when the Lady ’Canes traveled south to Bobby Menendez Gymnasium to take on the Lady Conchs, both teams were treating it as an early measuring stick for the season.

“This is a game we needed to play first, regardless of what the outcome was, because we needed to see what we are up against,” said Key West assistant coach Nathanial Hayes. “That way throughout the remainder of the season we take every game serious.”

And like a good heavyweight fight, the teams felt each other out during the first quarter, combining to score just 16 points, before the shots started to fall, mostly for Coral Shores, who pulled away late in the fourth quarter for a 67-50 victory.

“We couldn’t ask for a better win,” said Coral Shores coach Pat Meyers. “Even though there’s no so-called district, it’s a preview of what we will be going against later in that tournament and the girls came out with fire and passion.”

That was especially true for senior Lucia Rodriguez, who is the reigning All-Monroe County Co-Player of the Year, as she netted a game-high 24 points to go along with six assists and two steals.

“That was one of the best games I have seen her play in all her years,” Meyers said about Rodriguez.

It still took a bit for the Hurricanes point guard to find her groove, as well as the Lady Conchs, as only six points were scored in the first five minutes of game action, with Coral Shores leading 4-2. The Lady ’Canes would hold onto the lead the rest of the way, as they never trailed in the game and were tied just once at the start of the second quarter.

With Key West trailing by just five with less than three minutes to go in the first half, Coral Shores would go on a 6-2 run to head into the break in front 27-18. Rodriguez scored 11 of her 24 points in the second quarter, while Bekky Valenzuela, who finished the game with 12 points, 11 rebounds, four assists and two blocks, added seven points in the second quarter as did reigning co-Player of the Year Riley Dobson, who had 13 points and eight rebounds in the winning effort.

“What more can you say about the big three tonight,” Meyers said about Rodriguez, Dobson and Valenzuela. “They played one heck of a game.”

Key West rallied coming out of the half, paced by the backcourt play of Alyssa McRae and Mohina Rahkmonova, who combined for 16 points in the third. Trailing by 11, Key West was able to cut the Coral Shores lead to just five entering the fourth.

The Conchs had opportunities to bring the score back even in the fourth, but would come no closer than four, at 44-40, when Rodriquez took control of the game to help her team go on a 20-8 run in the final five minute to secure the victory. In that span, the guard dropped in 10 points while dishing out two assists.

“It all goes back to defense,” said Hayes. “We need to be able to sit back on defense and rotate to the ball when we are in the zone and that a lack of boxing out allowed them the second-chance points they were getting. We need to put a body on someone to eliminate those type of opportunities.”

Key West had as many steals as Coral Shores at 10 — a game-high four steals from McRae, who also led Key West with 19 points and four assists. Rahkmonova added 17 points, as well as a pair of rebounds, assist and steals — but the Lady ’Canes outrebounded the Lady Conchs 37-23 and 12-7 off the offensive boards.

It was the first of two regular-season scheduled games between the Monroe County rivals, and the respect still runs deep between the both as they plan on seeing each other in the district finals.

“It was kind of what I expected,” said Hayes. “I wouldn’t say we aren’t were we were supposed to be at, it’s just a lot of minor mistakes we need to correct in practice and move on from there so we can be there in the end.”