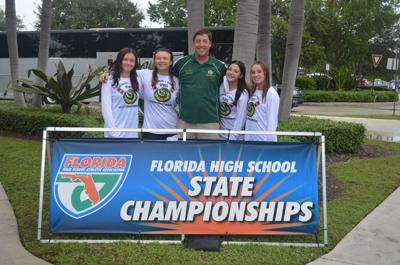 It was anything but a typical high school season for the Coral Shores High swim teams as the Hurricanes had one virtual meet, a far cry from the seven to nine a season, before entering the Florida High School Athletic Association postseason chase.

Fortunately for the Hurricanes, the Founders Park pool has been open since May, allowing the teams to practice with head coach Jon Olsen during the COVID-19 lockdown.

“We went back to work then, but even then I know they could have done a lot better if they had a few more races to get prepared for it. It was still an exciting couple of weeks even though the season was chaotic.”

“We went back to work then, but even then I know they could have done a lot better if they had a few more races to get prepared for it,” said Olsen. “It was still an exciting couple of weeks even though the season was chaotic.”

Once they were competing in the state series, the Hurricanes also had to deal with racing the District 12-1A Championship on a Saturday, due to coronavirus concerns, and then the Region 4-1A Championships just two days later on a Monday.

All that mattered little for the Lady ’Canes 400-yard freestyle relay team, made up of senior Zoe Marchetti, sophomores Corley Smith and Olivia Sargent, and freshman Vicky Pena, as the quartet were able to battle through the chaos to a berth in the 1A State Championships en route to being named The Citizen’s All-Monroe County Swimmers of the Year.

Their coach expected nothing less.

“I know their potential and how hard they have been training,” said Olsen. “We have another group of girls coming up next year as freshmen that will do the same thing, so the future is bright for the girls, that’s for sure.”

It was through the club program and offseason training at Founders Park when Olsen realized this was a strong grouping of swimmers, but he was still not convinced it was the best relay for the program overall until it was time to swim in the postseason.

“There’s a couple of girls that are almost at the same level, so it was a matter of deciding who fits best where so we had a solid team for all of our relays,” said the Hurricanes coach. “It just kind of happened these four girls came together on the free relay the way they did.”

The entire time, Olsen credited the senior Marchetti as the main cog of the relay.

“She was very important to the team because all the young girls look up to her, as they should,” said Olsen. “She’s been a great captain for us through the years and a great leader. She’s a tenacious competitor but is always the first to laugh and have some fun.”

Marchetti entered the season as The Citizen’s reigning All-Monroe County swimmer of the Year, as well as a two-time state qualifier, so Olsen admitted there was a bit more pressure on the senior.

“That’s why we went out of our way to make sure we gave the kids every opportunity we could,” said Olsen. “They were able to go through it all and not look back with any regrets.”

“She matched her expectations for sure,” said Olsen. “She was very excited to finish where she did, but it’s always a thing where you look back and think maybe I could have gone a little faster. At the same time, she accomplished a lot.”

“She still has a long way to go and I’m excited about her future,” said Olsen. “The way she has competed and trained the last couple of years, I definitely expected it and expect her to make another big jump against next year.”

“We are one of maybe two or three public schools in the state, once we get to that state level, and most of the schools we compete against are prep schools that get to recruit their swimmers from all over the place,” said Olsen. “So I think it’s a tremendous accomplishment when we do make it to states; a small public school from the Keys competing against the juggernauts from around the state. We don’t complain about it, we just put our heads down and go to work the best we can.”

The coach continued that for the quartet to make it to the finals, where he did not put any expectations on the squad, was a major accomplishment in itself and he was very proud of their work this season.

“I tried not to expectations at all this year, because of how different it was,” said Olsen. “There were times during this season we weren’t even sure we’d have an opportunity to compete at that level. So we were just thankful to be there and get the most we could out of the season.”

So while it was not the season expected, the coach said he believes the accomplishments of these four girls in just a matter of four races not only made this season a success but also will catapult the entire program into next season.

“It was definitely a success,” said Olsen. “Not only them, but all the other 42 kids we had involved this season, between the boys and girls, so for that many people to come out among what’s going on is pretty amazing. I think we are just going to build on this and just be better and better.”