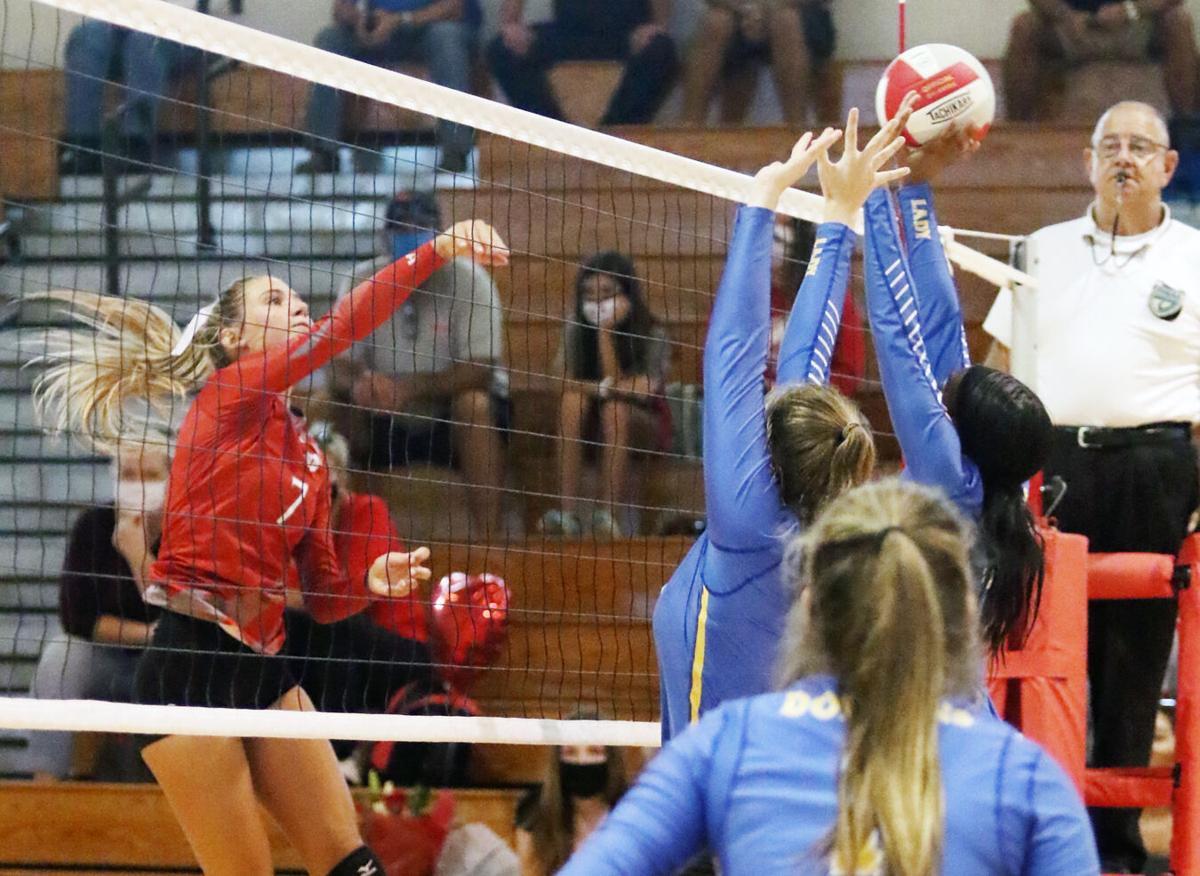 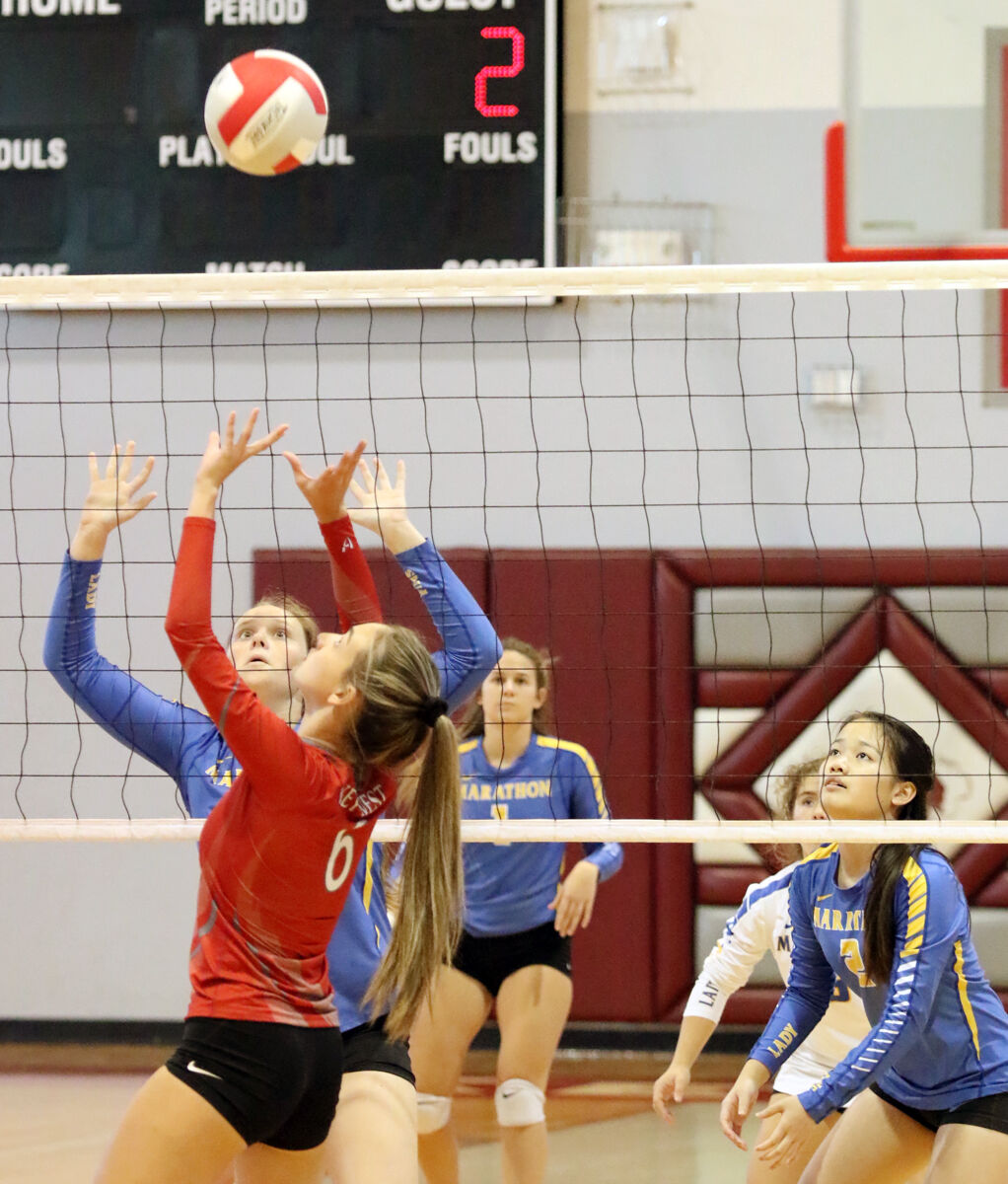 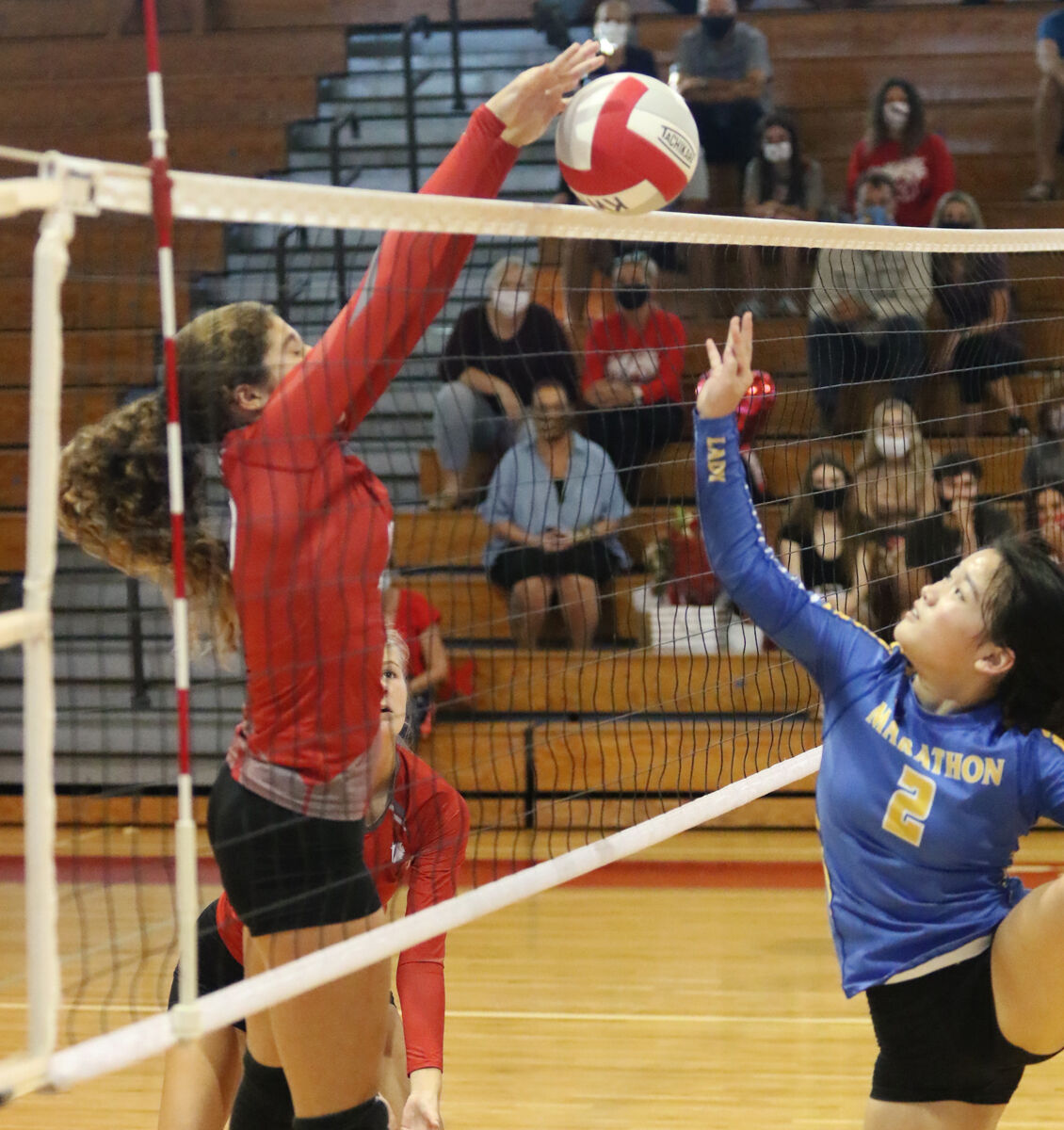 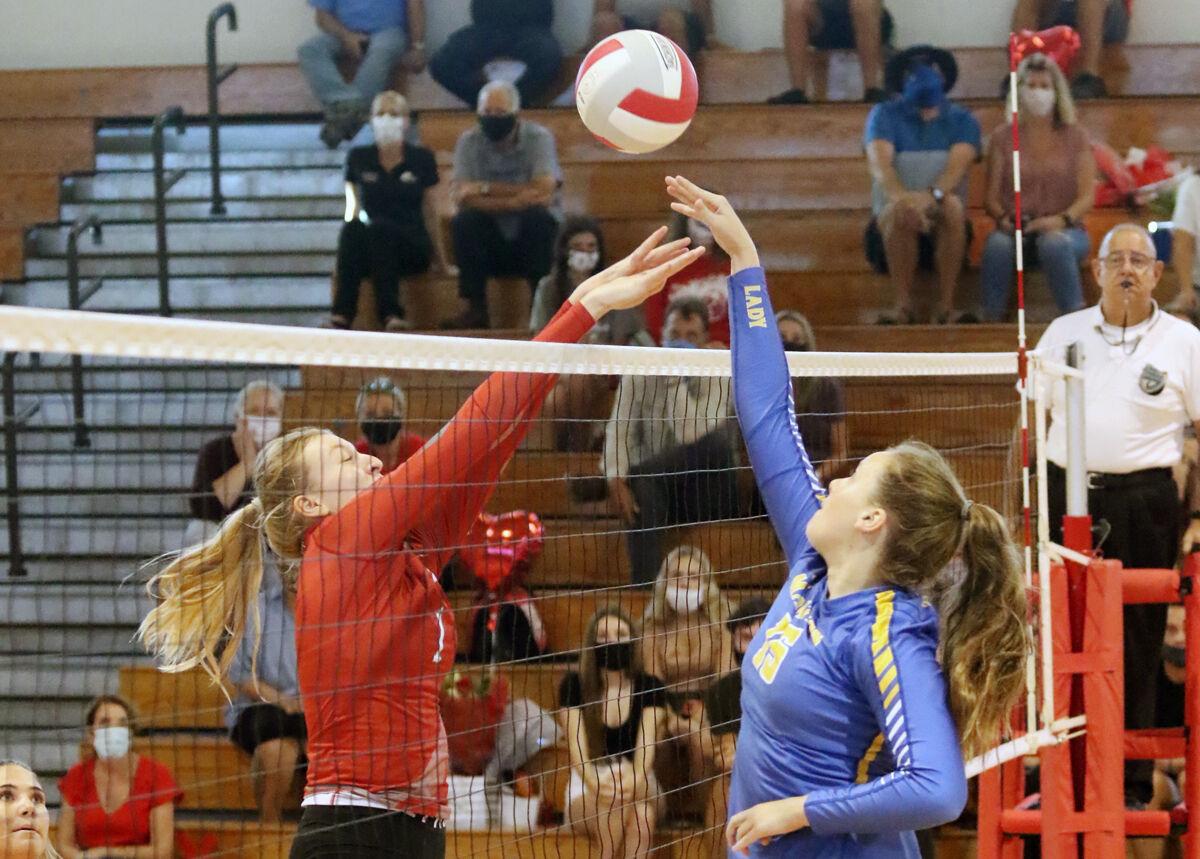 As the season has progressed, so has the Marathon High volleyball team — so much so that on Wednesday night the Dolphins were primed to play the role of spoiler and upset the Key West High volleyball squad on Senior Night at Bobby Menendez Gymnasium.

“Marathon just played lights-out,” said Key West coach Kim Butler. “They were really hustling and nothing was really hitting the ground on their side. They played awesome, and they got some balls that I was shocked to see them get.”

“We never play well at home, but at the same time I have to give credit to Marathon,” said Butler. “They were out-hustling us and we seem to be a bit of a roller coaster right now.”

In the opening game, Key West had only two service errors, a 93% hit rate and a combined 14 kills with only two errors to cruise to the convincing 1-0 lead.

“We were serving really well in the tournament this past weekend, and in that first game it was a big difference,” said Butler.

The Conchettes joined the excitement between games 1 and 2, but it seemed to be the Dolphins who fed off that energy as the Conchs missed five serves in the set, which allowed Marathon to rally to a 25-23 win.

“In a 25-23 final that makes all the difference if you take away all those service errors,” said Butler. “Because Marathon was getting back into the game, you could see a lot more nervousness in our players.”

Key West had five more service errors in the third game and was on the verge of going down 2-1, as Marathon led the set 24-20, when Lady Conchs junior Lindsey Clausen stepped to the line for what turned out to be four-straight service scores to send the set to extra points.

The Conchs regained the momentum following that runto close out the 27-25 win and then finished off the Monroe County counterparts in the fourth.

“That was showing grit and determination,” said Butler. “They were not going to quit or roll over and say die, and I’m proud of that.”

Gage had 22 assist, an 87 serve percentage and four aces; Sweeney contributed two blocks and seven kills in just 13 attacks with a .538 hitting percentage and no errors; Barrios put away 15 kills and 17 digs; and Zvolska picked up 12 digs.

“We had some pretty solid hitting numbers,” said Butler.

Also for the Lacy Conchs, Emiri Ichijo dug up 12 hits, Sam Ventimegila did not make any errors with go along with four kilsl and a .400 hitting percentage and Bridgette Sweeney added three blocks and five kills, but the Conchs conveyed she was most impressed with the play of Dolphins libero Rylan Chapa, stating she lengthened numerous volleys to keep the Dolphins in the match.

“Rylan was really the star of the game, for sure,’” said Butler. “She was definitely on point tonight and got to a lot of balls.”

Key West had its own chance to play spoilers of their own on Thursday night when they traveled to Tavernier to take on Coral Shores on its Senior Night, before closing out the season on Saturday against Westminster Christian.

Marathon’s regular season is now complete and the postseason begins on Monday against Palmer Trinity in an elimination game.

“I think if we play the way we played tonight we can beat Palmer,” said Marathon senior Cecily Ozbun. “It would be nice to end to do that because I don’t think we have beaten Palmer in volleyball since 2005.”

Key West’s too knows its opening round of the district tournament will be against Gulliver Prep, also on Monday. Despite defeating Gulliver twice this season, Butler still expressed her concern playing on the Raiders’ home court, where the tournament will be hosted.

“I think as long as we play clean we should be fine,” said Butler. “We are just so glad we got to play volleyball this year and have a Senior Night.”